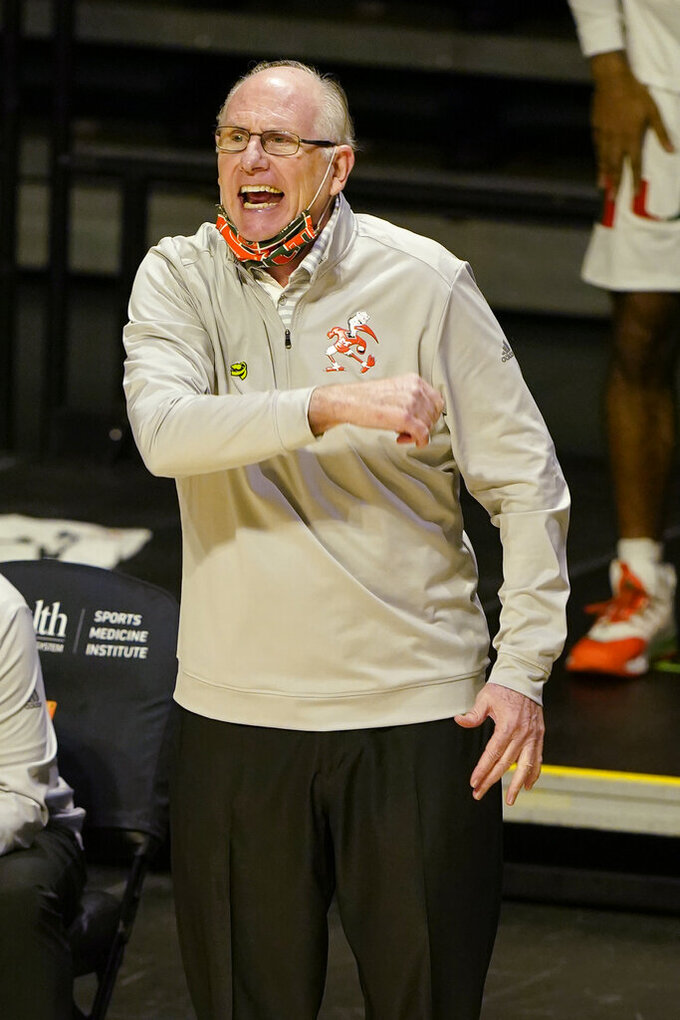 The top-ranked Iowa wrestling program is pausing all in-person activities in response to positive COVID-19 test results within the program, forcing the postponement of a dual meet at Penn State scheduled for Friday.

The move Monday by Iowa came at the direction of the university’s medical team. School officials said the university will continue to follow Big Ten Conference medical protocols and the medical team will decide when the Hawkeyes can resume their season.

The schools will work with the conference to consider rescheduling options.

The Atlantic Coast Conference announced that Miami's men's basketball game on Monday night at North Carolina has been postponed.

The postponement follows a meeting of officials from both schools who concluded the game could not be played, but neither school has publicly disclosed reasons why the game was called off.

Earlier Monday, The Daily Tar Heel student newspaper reported that video had surfaced on social media of UNC players Armando Bacot and Day’Ron Sharpe mingling with multiple other people celebrating Saturday’s win against rival Duke and no one wearing a mask.

On Sunday, the school said it was reviewing complaints of potential violations of student COVID-19 protocols after hundreds of fans flocked to Franklin Street to celebrate the big win.

No makeup date was given. Both teams are following ACC protocols.

Miami was the only ACC team that had not had a conference game postponed or canceled this season.

The Breeders’ Cup is delaying ticket sales for this year’s world championships in Southern California because of the coronavirus pandemic.

The two-day event is set for Nov. 5-6 at Del Mar racetrack, north of San Diego.

Breeders’ Cup officials said Monday that ticket sales are being delayed until they have “greater clarity” on the ever-changing situation involving COVID-19.

Officials says it’s their “strong intent” to host fans for the event. Southern California has been especially hard-hit during the pandemic.

Last year’s event at Keeneland in Kentucky did not include spectators.

Seven more NHL games have been postponed because of COVID-19 problems with New Jersey, Buffalo and Minnesota.

Three upcoming Devils games, two Sabres games and two Wild games have been postponed, with no clarity yet on new dates. New Jersey won’t play Thursday or Saturday against Philadelphia or next Monday against Boston and currently has 16 players on the league’s COVID protocols list.

Minnesota, which has nine players on the list, had games against St. Louis on Thursday and Los Angeles on Saturday postponed.

The English Premier League announced two positive tests in the latest round of coronavirus tests.

The two positives are the lowest total of new cases in the league since October, when there were also two from 1,609 tests.

Both positive cases came from the first round of tests in the first half of the week. The unnamed individuals are self-isolating for 10 days.

The U.S. Olympic wrestling trials won’t be held at the Bryce Jordan Center at Penn State because of COVID-19 restrictions on attendance. The trials were originally scheduled for April 2020 but weren’t held because of the postponement of the 2020 Tokyo Games.

USA Wrestling said early April remains the target date for the trials and a new site should be announced soon.

Spokesman Gary Abbott said a change in venue became necessary because capacity at the Bryce Jordan Center would be capped at 500 in the arena and 150 in the practice gym. Abbott said that capacity would not accommodate the participants, let alone spectators.

As part of an agreement with Penn State, the 2024 wrestling trials will be held at the Bryce Jordan Center.

The No. 2 Baylor men’s basketball team has postponed three more games because of COVID-19 issues and won’t play again until at least Feb. 20.

The Bears didn’t play Saturday’s scheduled home game against TCU and had already postponed Wednesday’s game at No. 12 Oklahoma before the latest changes announced Monday.

Now postponed are next Saturday’s home game against No. 7 Texas Tech, then two games next week at No. 14 West Virginia. That includes a Feb. 15 game at Morgantown, and then a Feb. 18 game in Waco that was supposed to be the makeup of a game postponed in January because of COVID-19 protocols in the Mountaineers program.

Baylor’s next scheduled game is Feb. 20 at home against No. 23 Oklahoma State.