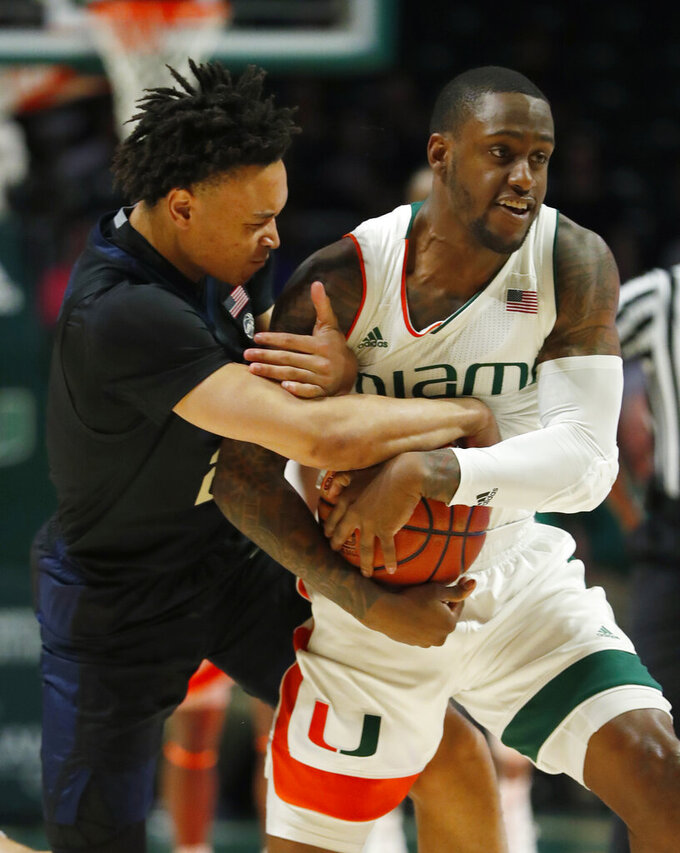 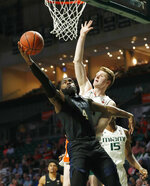 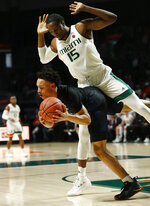 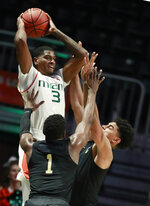 "Walking out with my parents — I'm not that emotional, and I wasn't about to cry, but I felt it," he said.

Instead of tears, there were plenty of cheers for Lawrence and his teammates on senior night Tuesday. He scored a career-high 27 points to surpass the 1,000-point milestone and help Miami to a 76-63 win over the Pittsburgh Panthers, who lost their 13th game in a row.

Ebuka Izundu added 14 points and 14 rebounds before the small crowd, which included his mother, Ifeoma, visiting from her native Nigeria. It was the first time she had seen her son play a basketball game.

"We weren't worried about seniors getting points or doing this or that," Lawrence said. "We just came out and played our game and executed very well."

Lawrence made 10 of 16 shots and added 11 rebounds and four assists in 39 minutes.

"Anthony was just sensational from start to finish," coach Jim Larranaga said. "He just did everything well."

Izundu started slowly but, with his mom watching, had 11 points in the second half.

"It was exciting for me," he said. "I was kind of nervous in the first half, but we got through it. We were just focused on getting a win and leaving on a good note."

Pittsburgh senior Jared Wilson-Frame tied a career high with six 3-pointers in 11 attempts to account for his 18 points.

The Hurricanes went ahead for good 2½ minutes into the game and built their biggest lead of the first half at 24-13. Pittsburgh scored eight consecutive points to cut the deficit to 54-53, but got no closer.

"That's how a lot of our games have been," Pitt coach Jeff Capel said. "We've been right there. We haven't been mentally strong enough to make the necessary plays."

The Panthers committed 15 turnovers, which led to 20 Miami points.

Pitt's comeback bid was stymied by 2-for-10 free-throw shooting in the second half.

"That really cost us," Capel said. "Those are really deflating plays."

Pitt lost to Miami for the sixth consecutive time.

Larranaga said every senior to play for him at Miami has earned a degree, and that streak will remain intact. Lawrence and Izundu will graduate this spring, and senior Zach Johnson is working on his masters.

The Hurricanes, who are 0-9 on the road, conclude their regular season Friday at No. 15 Virginia Tech.

"I want to get a road win, because we haven't gotten one all year," Lawrence said. "We're playing good right now. We've just got to keep it up."