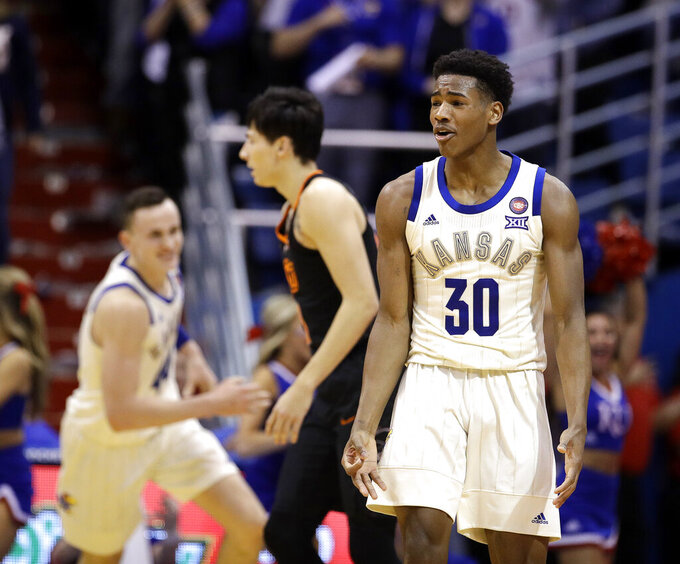 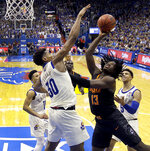 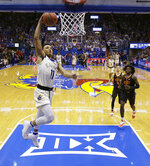 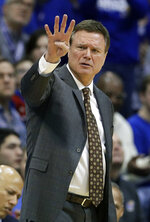 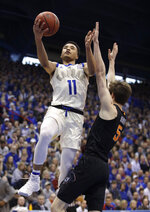 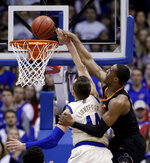 LAWRENCE, Kan. (AP) — Kansas got the lift it needed against Oklahoma State on Saturday from a pair of guys that would have been just about the longest of long shots to provide it just a couple of months ago.

Ochai Agbaji was still redshirting back then. Mitch Lightfoot was buried deep on the bench.

Yet it was Agbaji who was pouring in five 3-pointers and 23 points against the Cowboys, and it was Lightfoot playing above the rim at both ends of the floor. And along with Dedric Lawson, who had a game-high 25 points, the No. 13 Jayhawks shrugged off a slow start for an 84-72 victory.

"It's about taking your opportunities and making the best of them," said Lightfoot, who finished with six points and nine rebounds. "That could be two minutes or it could be 20."

Devon Dotson added 18 points for the short-handed Jayhawks (18-6, 7-4 Big 12), who were playing their first game without Lagerald Vick. He left the team this week to deal with a personal issue.

Vick's departure came at a tough time for the Jayhawks, who lost earlier in the week to rival Kansas State to leave them two games back in the race for a 15th consecutive conference title.

Oklahoma State (9-14, 2-8) played Kansas to a draw in the first half before Lawson, Agbaji and the rest of the Jayhawks caught fire. The Cowboys' own depth issues surfaced when Cameron McGriff got into foul trouble, allowing Kansas to slowly draw away late.

McGriff finished with 22 points before fouling out. Lindy Waters added 13 for Oklahoma State.

"We competed. We just didn't have enough to stave off the run they made in the second half," Cowboys coach Mike Boynton said. "Those things can come pretty quickly."

Even before Vick left, the Jayhawks were playing without three guys they thought would be big parts of the program. Silvio De Sousa is ineligible, big man Udoka Azubuike is out after season-ending wrist surgery and defensive stopper Marcus Garrett is recovering from an ankle sprain.

The result was a discombobulated first 20 minutes Saturday.

Freshman forward David McCormack got his first career start but still seemed lost on the floor, struggling to adapt to high-level college basketball. Fellow freshman starter Quentin Grimes was shut out in the first half, and nobody on coach Bill Self's crippled bench provided much energy.

Oklahoma State took advantage with a late run to make it 36-all at the break.

It was Lightfoot who finally sparked the Jayhawks coming out of the locker room. The backup forward soared for a couple crucial rebounds, stuffed a putback dunk and added a couple of energizing blocks to earn a standing ovation from a home crowd on edge.

Waters and McGriff answered for the Cowboys, who were trying to become the first team since 2001 to win back-to-back games in Allen Fieldhouse — they swept Kansas last season. But they failed to stop a 12-0 charge that finally gave the Jayhawks control.

Agbaji began it with a 3-pointer, Grimes added back-to-back 3s and Agbaji drained his fifth 3 to make it 65-51 and ultimately force Boynton into burning a timeout.

"That was just on us," Cowboys guard Isaac Likekele said. "We caved in a little bit."

The Jayhawks' lead eventually reached 19 points as they cruised to the finish, winning a game that they desperately needed to keep pace in the Big 12 title chase.

"I know people around here are freaking out because they lost four games in the league," Boynton said, "but they still have a Hall of Fame coach, still have a first-team All-America player and they still have one of the best home courts in all of America."

The Cowboys have lost three straight and six of seven. ... The Jayhawks improved to 17-0 at home and on neutral floors. They are 1-6 in true road games. ... Kansas committed 23 turnovers in its loss to the Wildcats. It had eight against the Cowboys.

Oklahoma State entered the game leading the Big 12 in 3-point percentage and number made, and the Cowboys needed to shoot well from the perimeter to hang with Kansas. They were 4 of 7 from the arc in the first half but 5 of 13 in the second, when the Jayhawks pulled away.

Kansas can't get Garrett back from his sprained ankle soon enough. Its game against Oklahoma State was the first of two in 48 hours, testing what little depth it has available.