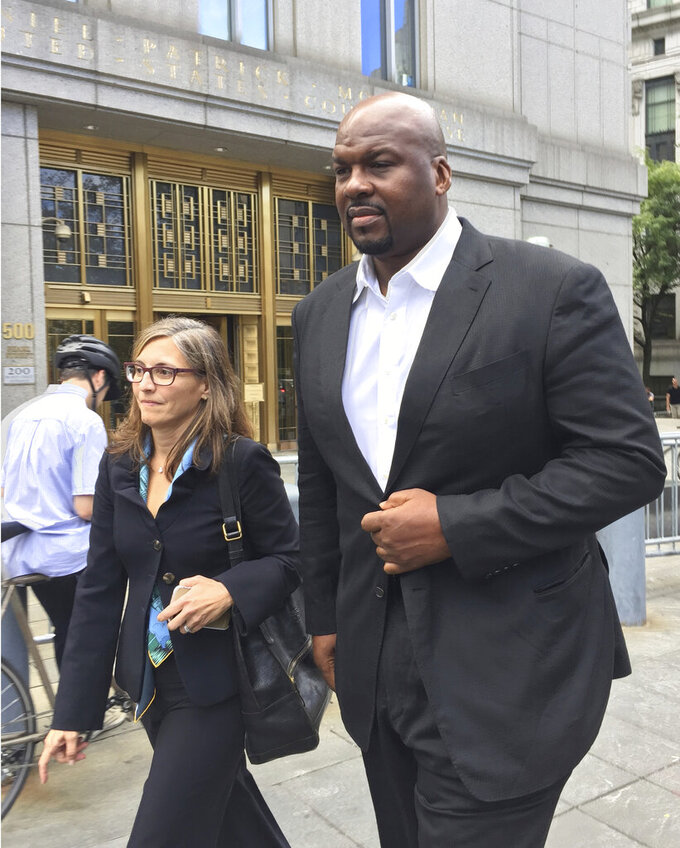 FILE - In this Oct. 10, 2017 file photo Chuck Person leaves Manhattan federal court in New York, after an initial appearance before a magistrate judge. Lawyers for the former Auburn University assistant basketball coach say the 13-year NBA veteran was broke and financially desperate when he joined a bribery conspiracy that cheated young athletes. They asked a judge in papers filed Tuesday, July 2, 2019 in Manhattan federal court to spare him from prison in the scandal that touched some of the biggest schools in college basketball. (AP Photo/Larry Neumeister, File)

They asked a judge in papers filed in Manhattan federal court to spare him from prison in the scandal that touched some of the biggest schools in college basketball.

"Chuck recognizes that his failure to manage his money responsibly led him to make the worst decision of his entire life," the lawyers said. "He grew up poor and suddenly came into millions of dollars without a clue how to manage it. Chuck spent too freely, gave to anyone who asked, made dreadful investment decisions, and turned to high interest loans as his financial circumstances deteriorated."

Prosecutors say Person, scheduled to be sentenced next Tuesday, accepted $91,500 in bribes to steer top players to a government cooperator posing as a financial adviser. Sentencing guidelines call for two years in prison though three other coaches who pleaded guilty to the same charge have received leniency.

Person's March guilty plea to a bribery conspiracy charge came nearly two decades after he was a regular presence on NBA courts, known as "The Rifleman" for lighting up scoreboards with his long-range shooting skills.

After he was drafted by the Indiana Pacers in 1986, he went on to play for five NBA teams over 13 seasons. In 2010, he earned a championship ring as an assistant coach with the Los Angeles Lakers.

Lawyers wrote that Person's financial troubles intensified almost as soon as his NBA career ended when he was paying $30,000 monthly to his ex-wife while he was earning $18,000 annually in his first non-playing role with the Cleveland Cavaliers.

"Chuck's singular focus on basketball, his failure to plan for his financial future, and his unbounded generosity ultimately had catastrophic consequences," they wrote.

The lawyers said he knew he was violating NCAA rules and was betraying his players and their families and Auburn University.

By 2016, when he was an assistant coach at Auburn, where he set a record as the school's all-time leading scorer in the 1980s, he was deeply in debt with bank loans, including one to finance a community center in his hometown, and several private loans, the lawyers said. One financial institution had obtained a default judgment, which garnished 25 percent of his wages at Auburn, they added.

"Creditors were growing impatient and Chuck was becoming desperate. Chuck could have turned to his many friends for help, but he was embarrassed and ashamed," they said.

Instead, the man who overcame racism and extreme poverty growing up in rural Alabama, got swept up in the college basketball scandal when his search for a new loan earned him an introduction to the government cooperator, the lawyers said.

His lawyers' submission included letters from Charles Sonny Smith, who coached at Auburn for 11 seasons through the 1980s, and Sam Perkins, another former NBA player who met Person when both competed to be on the U.S. Olympic team in 1984. Smith called Person "my favorite player ever." Perkins said Person was "still a good friend."