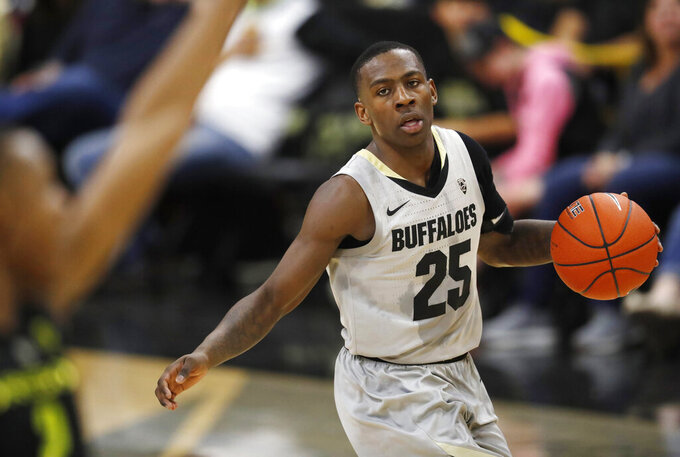 Good thing the standout guard got his troublesome left one fixed. So heap on the pressure — he's ready to carry the weight.

The Buffs were voted second in the preseason Pac-12 Conference poll. That's rare territory for a team searching for its first NCAA appearance since 2015-16. Then again, they do return their six top scorers.

"The bar is high for us of course," said Wright, who along with junior guard/forward Tyler Bey earned preseason Pac-12 first-team honors. "A lot of people expect big things out of us. We're going to do our best to give these CU fans what they deserve."

Wright averaged 13 points and 4.8 assists last season despite playing with a left shoulder so tender that he had to sleep on his back to keep it from hurting. He had surgery in the spring to fix a torn labrum and pronounced it "100 percent good to go" after a recent practice.

To take his game to another level, Wright has worked out with longtime NBA star and Colorado icon Chauncey Billups.

Wright's mission? Be mentioned alongside Billups in team lore.

Turns out, Wright carries a team a little better than a tune. The junior from Minnesota recently crooned some karaoke songs at Pac-12 media days — "Ain't No Mountain High Enough" in a duet with Oregon State's Tres Tinkle and then going solo for a rendition of The Temptations' "My Girl."

The Big Dance — now that would be something to sing about.

The Buffs are coming off a 23-13 season in which they made the NIT quarterfinals. They have virtually everyone back along with a familiar face in 7-footer Dallas Walton, who missed last season as he recovered from a torn ACL. They also added guard/forward Maddox Daniels , who played the last two seasons at Florida SouthWestern State College, and 6-10 forward Frank Ryder , a transfer from the University of San Diego.

The Buffaloes begin the season with a nonconference game against Arizona State on Nov. 9 in Shanghai during the fifth edition of the Pac-12 China Game. It won't be all work, though, with the team planning an excursion to Shanghai Disneyland.

This is the second big trip the team has taken overseas in recent years. In the summer of 2017, Colorado went to Italy as part of a tour that included stops in Rome, Florence, Venice and Como.

Colorado big man Evan Battey began feeling more like himself midway through last season. It took him some time to work his way back to full strength after suffering a stroke while playing pickup basketball with his friends in December 2017. He was a key contributor last season, shooting 48.4% from the field and finishing with 157 rebounds.

To round out his game, he's been studying the moves of Nuggets versatile center Nikola Jokic, who's known as a passer/scorer/facilitator.

Walton has been cleared after tearing the ACL in his right knee last October. His presence in the middle was missed after leading Colorado in '17-18 in blocked shots with 34.

"I know that in time things are going to come back to me," said Walton, who suffered two ACL tears in his left knee while in high school.

Bey decided not to work out for NBA teams after last season. He wanted to return and improve his 3-point range and passing.

"So that's what I was working on this summer a lot," Bey said.

Throw defense in there, too.

"Coach Boyle feels I can guard any position and I believe that as well, as long as I stay dedicated and work at it," Bey said.

On Dec. 7, the Buffs play against Kansas at Allen Fieldhouse. Boyle was a senior captain for the Jayhawks in 1984-85 when they featured a freshman named Danny Manning.