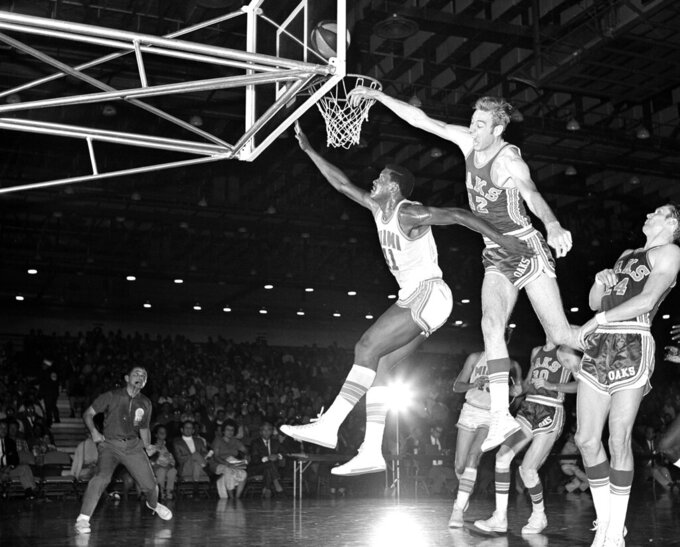 FILE - In this Nov. 28, 1968, file photo, Miami Floridians' Les Hunter (41) is fouled by Oakland Oaks' Jim Eakins (42) while scoring a basket during an ABA basketball game in Miami. Hunter, a star on Loyola Chicago's barrier-breaking 1963 NCAA championship team, died Friday, March 27, 2020, the school said. He was 77 and had been battling cancer. (AP Photo/Toby Massey, File)

Hunter helped Loyola — with four black starters — break down racial barriers and capture what remains the only NCAA Division I championship for an Illinois school by beating Cincinnati. The 6-foot-7 center from Nashville, Tennessee, averaged 17 points and 11.4 rebounds as a junior that season and followed that up by turning in 21.4 and 15.3 as a senior.

In an era when freshman did not play with the upperclassmen, Hunter had 1,472 points in three seasons and 1,017 rebounds — second on the school's career list. He and LaRue Martin are the only Loyola players with 1,000 points and 1,000 rebounds.

“If it wasn’t for Les and the rest of my teammates, I never would have been able to have the success I had,” teammate Jerry Harkness, a two-time All-American, said in a statement. “Unfortunately, Les never really got the recognition he truly deserved. Everything in our offense went through him.”

The Ramblers endured having water and ice and even pennies thrown at them during a game at Houston late in the championship season. They got death threats sent to their dorm after beating Tennessee Tech by a tournament-record 69 points in the opening round.

Hunter then played a key role in the “Game of Change” victory over all-white Mississippi State in East Lansing, Michigan. The Maroons had to sneak out in darkness before an injunction preventing them from playing the integrated Ramblers could be served.

Hunter got picked in the second round of the 1964 NBA draft by Detroit and played 24 games for the Pistons that season. He appeared in 24 NBA games for the Baltimore Bullets and played for five teams over six seasons in the ABA.