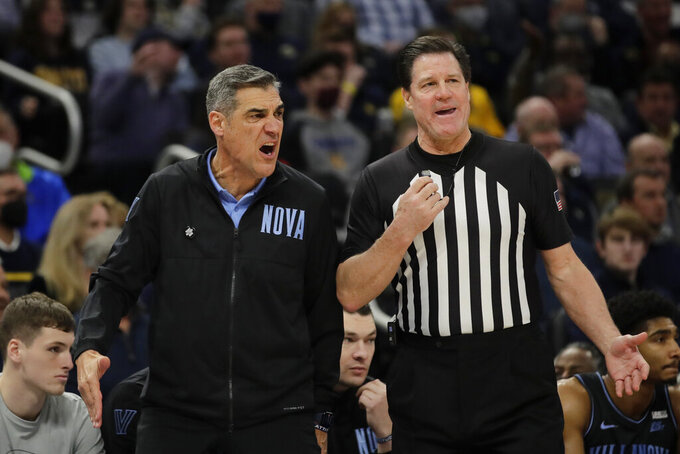 Villanova coach Jay Wright, left, argues with an official during the first half of the team's NCAA college basketball game against Marquette on Wednesday, Feb. 2, 2022, in Milwaukee. (AP Photo/Aaron Gash)

MILWAUKEE (AP) — Marquette is using the toughest portion of its schedule as an opportunity to showcase itself as a legitimate Big East title contender.

Justin Lewis had 19 points and nine rebounds, and No. 24 Marquette never trailed in an 83-73 victory over No. 12 Villanova on Wednesday night that completed a regular-season sweep of the conference's standard bearer.

It marked the fifth time in six games the Golden Eagles faced a team ranked in the Top 25 at the time. They went 5-1 during that stretch.

“When we approach a game the right way and we're locked in playing for each other and we've just got the crowd behind us and we're playing together as a team, I feel like we're just as good as any team in the country,” said Darryl Morsell, whose second-half surge thwarted Villanova's comeback attempt. “I knew it. I tried to warn people. I tried to tell people.”

Those two losses to Marquette represent Villanova’s only defeats in its last 11 games.

The sweep represents the latest notable achievement for Marquette under new coach Shaka Smart, who rebuilt the Golden Eagles' roster during the offseason.

“There's a lot of new guys on this team and a new coaching staff,” Villanova coach Jay Wright said. “It's really impressive to see that be put together so quickly. I think Shaka and his staff deserve a lot of credit. They're not just talented. They're a good team. They execute. They play well together. As I said, it's very impressive.”

The first Marquette-Villanova matchup was decided by Lewis’ tiebreaking 3-pointer with 11.9 seconds left. This time, the Golden Eagles didn’t need to rely on any big shots in the closing seconds.

Marquette guard Tyler Kolek scored 18 points and Morsell added 15 before fouling out. Villanova got 18 points from Brandon Slater, 16 from Collin Gillespie, 15 from Caleb Daniels and 10 from Jermaine Samuels.

Villanova rallied from a 14-point halftime deficit to get within three midway through the second half, but Morsell sparked a surge that got Marquette’s lead back to double digits.

After Gillespie missed a 3-point attempt that would have tied it with 9:19 remaining, Morsell was personally responsible for an 8-0 Marquette run. He made four baskets and blocked a shot in less than 2½ minutes to extend the lead to 11.

Marquette's lead didn't drop below seven the rest of the way.

“I’m really proud of our guys for the way they hung in there,” Smart said. “I felt that was a game that there were several times where we could have let go of the rope. We just kept fighting.”

Marquette grabbed control early by turning its biggest weakness into a strength.

The Golden Eagles entered Wednesday having been outrebounded by 3.8 boards per game. They were outscored 22-1 in second-chance points Sunday in a 65-63 loss at No. 15 Providence, which scored the winning points by converting an offensive rebound into a three-point play.

But they dominated Villanova on the boards early on. They outrebounded Villanova 18-9 and had a 9-3 edge in second-chance points over the first 20 minutes.

Marquette ended up with a 35-27 rebounding advantage and a 12-11 lead in second-chance points.

Villanova went on an 8-0 first-half run that culminated with a 3-pointer by Slater, who received a technical foul shortly after making the shot that cut Marquette’s lead to 30-27. Marquette scored the next 11 points, with nine of them coming from Kolek. Wright said the technical foul was called because Slater cursed.

Villanova: The Wildcats did a nice job of clawing back early in the second half, but their shooting woes prevented them from completing the comeback. Villanova missed 12 of its first 13 3-point attempts in the second half.

Marquette: The Golden Eagles improved to 6-5 against Top 25 teams this season. They're just the third team to sweep Villanova since the Big East reorganized in 2013-14. The others were Creighton in 2013-14 and Butler in 2016-17.

The win assures Marquette will stay in the Top 25 next week and could make it up to the top 20. Villanova shouldn't fall too far after losing on the road to a ranked team.

Villanova: Hosts No. 17 UConn on Saturday.

Marquette: At UConn next Tuesday.