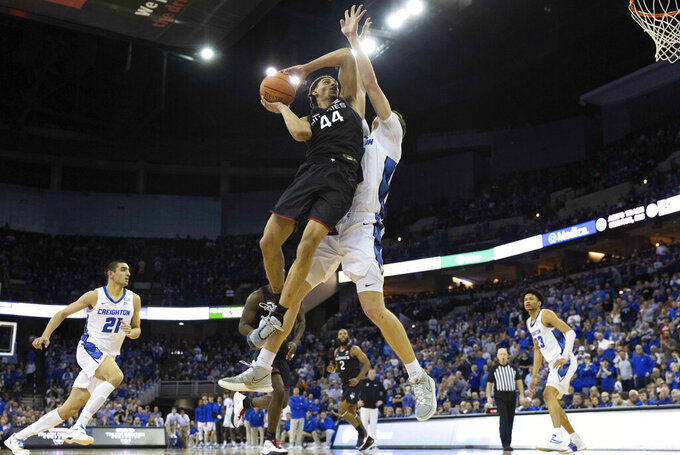 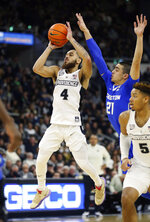 Lewis, rated the Big East's best NBA prospect, boosted his averages from 7.8 points and 5.4 rebounds per game as a freshman reserve last season to 17.1 points and 8.0 rebounds in 2021-22.

The 6-foot-7 sophomore from Baltimore blossomed under new Golden Eagles coach Shaka Smart, earning a spot on the all-Big East first team and winning the league scoring title with an average of 18.2 points in conference games.

Lewis was the only Big East player to rank among the top five in scoring and rebounding.

“Shaka has done a good job of letting him be the leader,” St. John's coach Mike Anderson said after Lewis scored 28 points Saturday night in an 85-77 victory over the Red Storm.

Kalkbrenner, a 7-foot-1 sophomore from St. Louis, led the Big East with 80 blocked shots. He anchored a Bluejays defense that ranked first in the league in field goal percentage defense (40%) and second in scoring defense (67.5 ppg) during conference games.

The 5-foot-10 Bynum helped spark the 11th-ranked Friars (24-4, 14-3) to their first Big East regular-season championship. He started just three conference games but led the team in scoring with an average of 15.6 points during league play — including a string of clutch shots.

Bynum ranked third in the conference in assists with 4.9 per game and shot 46.5% on 3-pointers. He was the first Big East player in 25 years to score at least 25 points off the bench three times in one season.

Although the last-place Hoyas went 0-19 in conference competition, Carey averaged 14.2 points. He was a 91% free-throw shooter, second in the league.

Carey was the first team captain chosen at Georgetown under coach Patrick Ewing.

Big East head coaches pick the award winners and are not allowed to vote for their own players. The conference's player of the year, coach of the year, freshman of the year and scholar-athlete of the year will be announced Wednesday afternoon at Madison Square Garden before the conference tournament tips off.