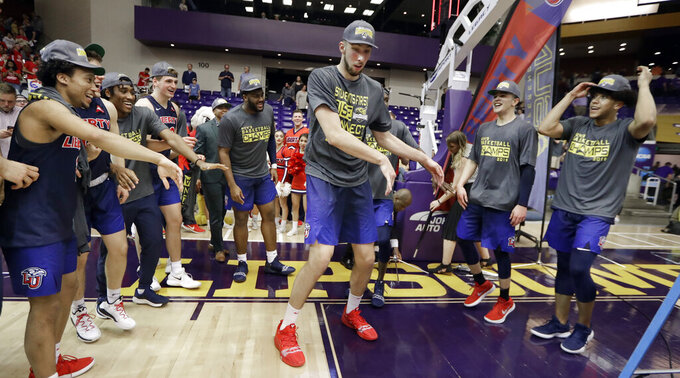 NASHVILLE, Tenn. (AP) — The Liberty Flames didn't talk about missing the NCAA Tournament a year ago on a buzzer-beating 3-pointer. Instead, playing again for an automatic berth, junior guard Caleb Homesley wouldn't let them forget.

Scottie James' layup with 55.8 seconds left put Liberty ahead to stay and the Flames capped their first season in a new conference by topping Lipscomb 74-68 Sunday for the ASUN Tournament championship and their first NCAA Tournament trip since 2013.

The win was sweet redemption a year after losing the Big South Conference tournament final at the last second. Homesley insisted that loss to Radford wasn't mentioned before this final.

"But there were times in this game where I kind of rallied the guys together when they would go on a run and just say, 'Let's finish the game. Let's do the hard little things,'" Homesley said. "And I think that it really caught on to do the stretch that we had through the end of the game,"

Liberty pulled off a big win at the biggest crowd ever to see a game at Allen Arena, and this thriller featured 18 lead changes in the second half. The Flames won for the second time this season on Lipscomb's home court.

"I'm so proud of our guys the way we weathered the storm," Liberty coach Ritchie McKay said. "I think this is just one of those games that you needed a break or two down the stretch, and we were fortunate to get one."

Liberty (28-6) switched to the ASUN Conference for this season and split the regular season title with Lipscomb. The Flames earned their fourth NCAA Tournament bid overall and first since playing in the Big South.

The Flames, from Lynchburg, Virginia, were up 29-28 at halftime and never led by more than four until the final seconds.

Garrison Mathews, the ASUN player of the year, made a pair of free throws with 1:31 left to give Lipscomb its last lead at 66-65. James then scored, and Georgie Pacheco-Ortiz hit a 3 with 14.8 seconds remaining for a 70-65 lead. James added two free throws with 8.4 seconds, and Homesley finished it off with two more with a second on the clock.

That started the celebration with senior Lovell Cabbil Jr. and Pacheco-Ortiz on their knees pounding the court before being smothered by their teammates.

"Personally I hate that we couldn't deliver the final result that would've put the whole thing over the top," Lipscomb coach Casey Alexander said. "But we played a great team. We had an unbelievable year, and it was a great game and we just finished up short."

The Bisons led 28-20 with 4:52 left in the first half. Liberty scored the final nine capped by a layup by Cabbil giving the Flames a 29-28 halftime lead.

Matthews finished with 21 points, Rob Marberry had 18 and Kenny Cooper 14 for Lipscomb.

Liberty: The Flames play some of the best defense in the country, coming in ranked fifth nationally giving up just 60.5 points per game. They showed off just how disruptive they can be against Lipscomb, forcing 10 turnovers. Liberty finished with a 15-8 scoring edge off turnovers.

Lipscomb: Now the Bisons have to sit, wait and hope that a NET ranking of 42 along with victories at SMU, then-No. 18 TCU, Navy and Vermont help them earn an at-large berth into the NCAA Tournament. Matthews sounded resigned for the NIT, and Alexander said they can only wait and see.

"They've had an incredible year," McKay said of Lipscomb. "I think they're NCAA Tournament at-large worthy, and I'm not just saying that because they're in the same league. Having been at Virginia for six years, I know what an NCAA Tournament team looks like and that's one of them."