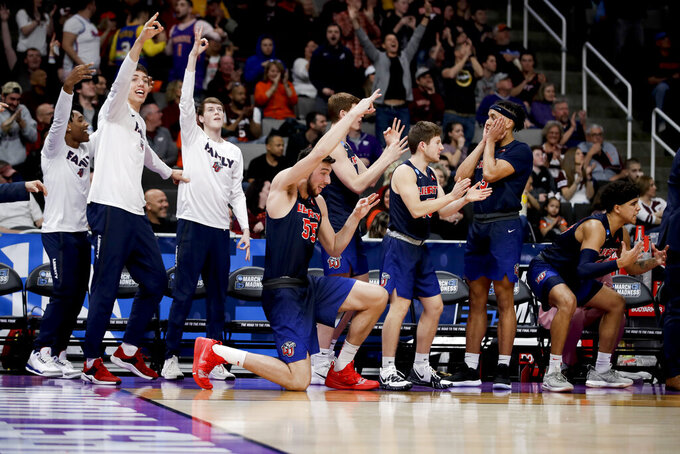 Liberty celebrates during the second half of a first round game against Mississippi State in the NCAA men's college basketball tournament Friday, March 22, 2019, in San Jose, Calif. (AP Photo/Ben Margot) 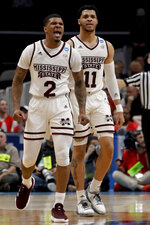 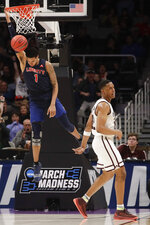 SAN JOSE, Calif. (AP) — Down by 10 points with less than seven minutes to play against a more accomplished opponent, Liberty didn't give in a bit. Instead, the Flames just kept getting the ball to Caleb Homesley.

Homesley scored 22 of his 30 points in the second half, and Lovell Cabbil hit a go-ahead 3-pointer with 1:16 to play to send 12th-seeded Liberty to its first NCAA Tournament win, 80-76 over fifth-seeded Mississippi State on Friday night.

The Flames (29-6) were making their fourth tournament trip in school history, but lost twice as a No. 16 seed and once in a play-in game. This year's team had more respect, a higher seeding and capitalized on the opportunity. Liberty advanced to the second round of the East Region to play Virginia Tech — a West Coast meeting between two southwest Virginia schools 85 miles apart.

Homesley helped rally Liberty from a 10-point deficit in the second half by scoring 14 points in a span of less than five minutes.

"He took over. He's done that on occasion for us. He's had spurts," coach Ritchie McKay said. "When he starts to feel good about his shot, he's such a dangerous offensive player."

Cabbil then hit from long range to make it 72-70 and celebrated with an enthusiastic fan section that made the cross-country trip for the game.

Liberty did the rest at the foul line to spoil the first tournament trip for Mississippi State (23-11) in a decade.

"It's just a tough, tough pill, tough one to swallow, especially the way we had that lead late in the game," coach Ben Howland said.

Mississippi State appeared poised to take control when Peters started a 10-0 run with a 3-pointer and ended it with a layup that made it 63-53 midway through the second half.

The Bulldogs had used their superior size to control the paint on both ends and had broken open a tight game before the Flames responded. Homesley was fouled on a 3-pointer and made all three foul shots. He then hit two from long range to cut it to 67-64.

Homesley also had a backdoor dunk on a feed from Cabbil to make it a one-point game before hitting a long 3-pointer late in the shot clock to put Liberty back on top 69-67 with 2:34 to play.

After three free throws from the Bulldogs, Cabbil's 3 provided the final lead change of the night.

"We just have an incredible belief throughout this entire team," Cabbil said. "Even when we got down by 10, everyone was still yelling, 'We can get back into this.' Down the end we were able to get some critical stops, a couple of charges, some big-time 3s."

Liberty: The Flames showed early that they were poised to match up with a Power 5 team. They made seven 3-pointers in the first half and led by four points before Mississippi State scored the final six to lead 37-35 at the break.

Mississippi State: Howland's first recruiting class for the Bulldogs finished on a down note but had an impressive run building the program. Mississippi State went to the semifinals of the NIT last year and made the tournament for the first time since 2009 this year.

Liberty ranked 12th in the nation this season in foul shooting, making 77.1 percent. So it was no surprise the Flames were able to ice the game at the line, making 8 of 10 in the final minute.

The Bulldogs had seven blocked shots in the second half as Aric Holman and Abdul Ado made things difficult for the Flames on the interior, forcing them to rely on outside shots.

Liberty advances to play Virginia Tech in the second round in a rematch of a charity game in November. The Hokies won 86-70 in a game that raised money for hurricane relief.