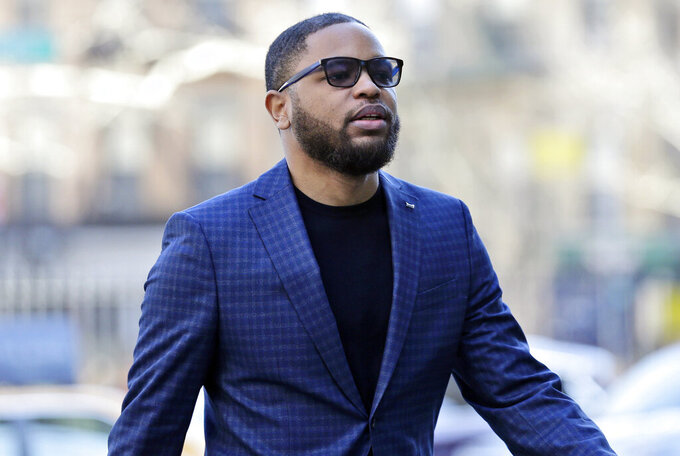 FILE - In this March 5, 2019, file photo, Christian Dawkins arrives at federal court in New York. A prosecutor says greed led a fledgling manager of basketball players to bribe college coaches but defense lawyers say it was all an FBI setup. The characterizations came during opening statements Tuesday, April 23, 2019, in the second trial to result from a prosecution that has exposed a seedy side of college basketball recruitment. On trial are business manager Christian Dawkins and ex-amateur league director Merl Code. (AP Photo/Seth Wenig, File) 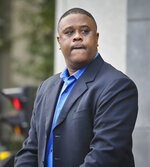 NEW YORK (AP) — The player widely projected to be the NBA draft's top overall pick came up at a college basketball corruption trial Thursday as jurors heard a recording of a Clemson coach who seemed eager for help from an aspiring agent.

The charismatic Zion Williamson played one year at Duke before entering the draft scheduled for June.

His name surfaced as video recordings of meetings with college coaches were played at the criminal trial of the aspiring agent, Christian Dawkins, and an amateur basketball coach, Merl Code, who are charged with paying bribes to assistant basketball coaches to help secure NBA-bound players as customers.

Prosecutors say the defendants teamed up with undercover FBI agents and a corrupt financial adviser to decide which college coaches should get money to steer players their way.

The tapes showed several meetings at a Las Vegas hotel where coaches seemingly auditioned for the chance to prove their schools had enough top-tier talent. If the schools were deemed qualified, they would be paid cash to match their best players with agents and financial advisers who would follow them to the NBA.

Louis Martin Blazer is a financial adviser who started cooperating with the government after pleading guilty to ripping off clients for more than $2 million. He described the meetings to a jury during his third day on the witness stand.

Some of the coaches did not get cash because "their programs weren't at that elite level" and their recruits were not valuable enough or certain to go high in the draft, Blazer said.

"They were kind of pitching us on their services," Blazer said. "Kind of like they were pitching us to say: 'Work with us.'"

In a July 2017 recording, Dawkins was heard telling Clemson assistant coach Steve Smith he could help get Williamson's family cash if the player chose Clemson over North Carolina, Duke and Kentucky.

Blazer testified that then-USC assistant coach Tony Bland was paid $13,000 at his meeting after Bland flew to Las Vegas on the school's private jet.

He said Bland needed money to try to recruit Marvin Bagley III. Blazer described watching the undercover FBI agent put an envelope with cash on the table for Bland.

"I need you guys to be on campus the minute he signs," Blazer said Bland told them. "Be ready for that."

Bagley eventually played for Duke for a season before being selected second overall in the 2018 NBA draft by the Sacramento Kings.

Bland and three other former assistant coaches have pleaded guilty to bribery conspiracy and await sentencing. The others are Emanuel "Book" Richardson at Arizona, Chuck Person at Auburn University and Lamont Evans, who coached at South Carolina and Oklahoma State.

"We are aware of the developments in federal court today involving one of our men's basketball assistant coaches," Clemson said in a statement. "We take this matter seriously and will immediately conduct a review."