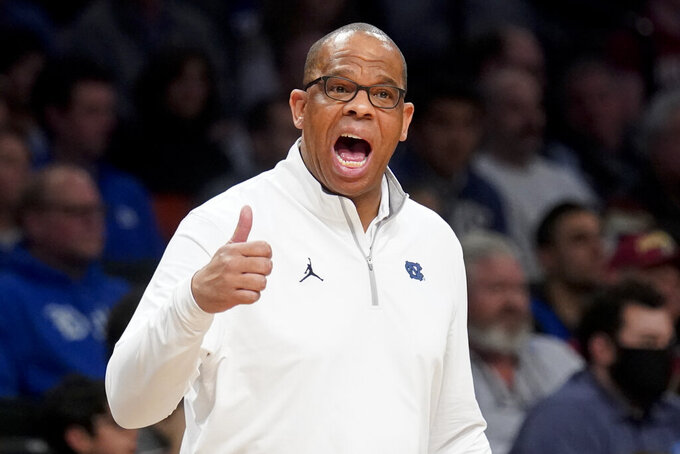 The latest on the NCAA Tournament bracket announcement:

The Tar Heels are the No. 8 seed in the East with a first-round game against Marquette. It’s the second straight season UNC ended up as an 8-seed. The Tar Heels lost to Wisconsin 85-62 last year in the only first-round loss for Williams in his Hall of Fame career.

Davis says it’s been a great year and a long year. He says some people think North Carolina being in the NCAA Tournament is a given, but it isn’t.

Davis played four seasons under Dean Smith at UNC, going to the Sweet 16 three times and helping the Tar Heels reach the 1991 Final Four before a 12-year NBA career.

The Auburn Tigers have been disappointed once after missing out on a No. 1 seed in the NCAA Tournament. Now the second-seeded Tigers are heading to the Midwest Region hoping to avoid another one-and-done this season.

Auburn won the Southeastern Conference regular-season title only to lose its opener in the league tournament to Texas A&M, which didn’t make the 68-team field. That loss ended the Tigers' hope of a No. 1 seed.

Point guard Wendell Green Jr. says he always tells his teammates great teams don't lose two games in a row. He says they're ready and not going to let one loss take them down.

Guard Zep Jasper says they're going to play for everyone knowing they disappointed fans who went to Tampa for the SEC Tournament. Jesper says they're trying to make it to New Orleans for the Final Four and maybe even a championship.

The ninth-ranked Tennessee Volunteers have an argument that they deserved a better seed than third in the South Region.

Tennessee ranked second nationally with 11 Quad-1 wins behind only Kansas, which had 12. The Volunteers won the Southeastern Conference Tournament title on Sunday for the first time since 1979. The Vols also beat Auburn late in the regular season and Kentucky in the tournament semifinals.

The Volunteers wind up in the same region as top-seeded Arizona. Tennessee handed Arizona its first loss of the season, 77-73 in Knoxville in December.

Tennessee coach Rick Barnes said after the SEC tourney win that he already argued earlier that whoever won the championship should be a No. 1 seed. Barnes spoke before the bracket was announced. He said the Vols have a new season starting and have to be ready.

The NCAA Tournament has some very interesting potential matchups in the second round, especially in the West Region.

The best season in Boise State program history would get better, and more interesting if the eighth-seeded Broncos can beat No. 9 Memphis in Portland. That would set up an almost certain second-round matchup against No. 1 overall seed Gonzaga.

Broncos coach Leon Rice was an assistant for 11 seasons under Mark Few at Gonzaga before leaving for Boise State 12 years ago. They’ve never coached against each other.

The Big Ten leads all conferences with nine teams in the NCAA Tournament.

Tom Burnett is the chairman of the Division I men’s basketball committee and commissioner of the Southland Conference. Burnett said on the selection show that the Big Ten is “very deserving” of having that many teams in the tournament.

The Big East, Big 12 and Southeastern Conferences have six teams apiece. The Atlantic Coast Conference got five teams into the tournament, followed by the Mountain West with four. The West Coast and Pac-12 have three apiece. The American Athletic Conference and Atlantic 10 each have two.

The last four teams into the tournament were Indiana, Notre Dame, Rutgers and Wyoming. Indiana and Wyoming will play in Dayton, Ohio, for a 12 seed in the East Region. The winner of that game gets top-seeded Baylor on Thursday in Fort Worth, Texas.

The first four teams out of the tournament were Texas A&M, Dayton, Oklahoma and SMU.

Texas A&M already is being seen as the biggest snub of all after winning three straight games with upsets of Auburn and Arkansas to reach the SEC Tournament title game. The Aggies lost to No. 9 Tennessee earlier Sunday. The Aggies couldn’t shake the damage from their monthlong eight-game skid despite winning eight of their last nine games.

Defending national champion Baylor is a No. 1 seed for a second straight NCAA Tournament.

The Bears are the top seed in the East and open the tournament Thursday close to home in Fort Worth, Texas. Baylor will play Norfolk State.

Kentucky is the No. 2 seed and opens Thursday in Indianapolis against Saint Peter's. Purdue is the No. 3 seed and plays Yale on Friday in Milwaukee.

Saint Mary's is the No. 5 seed and plays Thursday in Portland, Oregon. Saint Mary's will play either Wyoming or Indiana, who will meet first in Dayton, Ohio, for the No. 12 seed.

Marquette as coach Shaka Smart's third different team in the NCAA Tournament plays No. 8 seed North Carolina on Thursday in Fort Worth.

Murray State is a seven seed and plays No. 10 seed San Francisco on Thursday in Indianapolis. This is San Francisco's first tournament berth since 1998.

The Kansas Jayhawks are the top seed in the Midwest Region of the NCAA Tournament.

This is the 15th No. 1 seed for Kansas and the first since 2018. The Jayhawks open the tournament Thursday in Fort Worth, Texas. They will play either Texas Southern or Texas A&M-Corpus Christi. Those teams meet Tuesday in the First Four in Dayton, Ohio.

LSU is the No. 6 seed, playing Iowa State on Friday in Milwaukee. The Tigers will have an interim coach after firing Will Wade on Saturday.

Wisconsin is the No. 3 seed in the Midwest and starts close to home, playing Colgate on Friday in Milwaukee.

The Arizona Wildcats are the No. 1 seed in the NCAA Tournament's South Region.

This is the seventh No. 1 seed for Arizona (31-3) and the first for the Wildcats since 2014. They will open the tournament Friday in San Diego. Arizona will play either Wright State or Bryant. Those teams will meet in the First Four in Dayton, Ohio, for the 16th seed.

Villanova is the No. 2 seed and will open Friday in Pittsburgh against Delaware. Tennessee is the No. 3 seed in the South Region after winning its first Southeastern Conference Tournament in 43 years. The Vols open Thursday, playing Longwood in Indianapolis.

Michigan made the NCAA Tournament bracket with an at-large berth despite a 17-14 record. The Wolverines are an 11 seed and play sixth-seeded Colorado State on Thursday in Indy.

The top-ranked Gonzaga Bulldogs are the top overall seed in the NCAA Tournament for a second straight year.

Gonzaga is a No. 1 seed for the fifth time in program history. The Bulldogs (26-3) will play Georgia State on Thursday in Portland, Oregon, in the West Region.

Duke is the No. 2 seed in the West, and the Blue Devils will start coach Mike Krzyzewski's final NCAA Tournament on Friday in Greenville, South Carolina. They play Cal State-Fullerton. No. 7 seed Michigan State plays 10th-seeded Davidson in that bracket, setting up a potential second-round matchup between Spartans coach Tom Izzo and Krzyzewski.

Rutgers will play Notre Dame in Dayton, Ohio, for the chance to be the No. 11 seed playing sixth-seeded Alabama on Friday in San Diego, California.

The countdown is on for the unveiling of the NCAA Tournament bracket.

Top-ranked Gonzaga is expected to be named the No. 1 overall seed for a second straight tournament on Sunday when the bracket is announced. The Zags aren't undefeated as they were a year ago. They are 26-3 with their eighth West Coast Conference Tournament title in nine seasons.

That gives the Zags one of the 32 automatic berths in the bracket with 36 at-large berths available. Defending champion Baylor is in the running for one of the other No. 1 seeds along with Arizona and Kansas.

No. 9 Tennessee grabbed one of the automatic bids available Sunday by beating Texas A&M for the Southeastern Conference Tournament title. Richmond stole a bid by winning the Atlantic 10 Tournament. Yale won the Ivy League tourney.

Iowa from the Big Ten and Houston from the American Athletic Conference won automatic berths within 30 minutes of the bracket release.