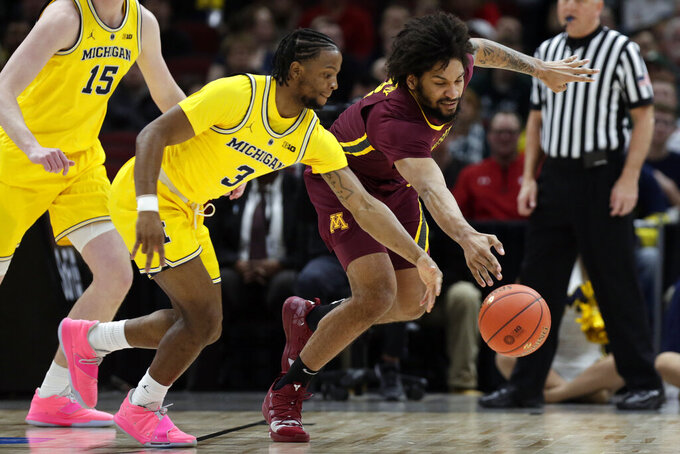 Michigan's Zavier Simpson, left, and Minnesota's Jordan Murphy battle for a loose ball during the first half of an NCAA college basketball game in the semifinals of the Big Ten Conference tournament, Saturday, March 16, 2019, in Chicago. (AP Photo/Kiichiro Sato) 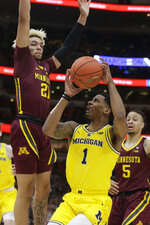 CHICAGO (AP) — No. 10 Michigan had just buried Minnesota when the focus shifted to the opportunity at hand.

The Wolverines didn't just earn a shot at a record third straight Big Ten Tournament championship. They put themselves in position to get some payback against their archrival.

Isaiah Livers scored a career-high 21 points, and Michigan set up a Big Ten title game against No. 6 Michigan State with a 76-49 romp over Minnesota in the semifinals on Saturday.

The third-seeded Wolverines (28-5) took control with a big run in the first half and put the game away in the second. On Sunday, they will go for their first win in three tries this season over the Spartans, who beat Wisconsin 67-55 in the other semifinal.

Michigan blew a chance to win the regular-season title by losing to its rival twice in the final four games. Michigan State wound up with the top seed in the conference tournament.

They're set to meet again, with the Spartans trying to extend a record by winning their sixth championship and Michigan also trying to do something no other Big Ten team has done.

"We have to embrace it," coach John Beilein said. "Michigan State is not going away as being a force in the Big Ten. Michigan is not going away as a force in the Big Ten. And as a result, you have two great programs ... that have both been to Final Fours the last 10 years. ... It's a great venue right now, with two really storied programs going at it. There were times in the '60s and '70s and '80s that weren't like that. Now, to be right there, it feels really good that we've accomplished that. I think they feel the same way, that they are competing with a great program like Michigan every day and it's great for everybody."

Beating Michigan State almost certainly won't be easy. Getting past Minnesota, however, was a breeze .

Amir Coffey led Minnesota (21-13) with 14 points. But after squeezing out tight victories over Penn State and No. 13 Purdue to reach the semifinals for the second time in three years, the Gophers were simply overmatched.

"I think we made a good run," Minnesota's Jordan Murphy said. "Obviously, this is something we can take away from and have positive momentum going into the (NCAA) Tournament. We'll see where we're at tomorrow and just make sure that our guys are confident and make sure we keep our heads up."

The game was tied at 13 midway through the first half before the Wolverines broke it open with an 18-2 run, holding Minnesota scoreless for nearly six minutes.

Livers drove the baseline for a two-handed dunk and Simpson finished it with a 3, making it 31-15 with 3:34 left.

After Murphy scored in the paint to end the drought for Minnesota, Jon Teske buried a 3 for Michigan that hit the flat part of the back of the rim. And Simpson went nearly the length of the court for a buzzer-beating layup off a miss by Coffey, making it 38-19.

Michigan put the game away in the second half with a 9-0 run that made it 56-30 with about 14 minutes left.

Minnesota: The Gophers put themselves on more solid ground for the NCAA Tournament with two conference tournament victories.

Michigan: Besides getting some payback against Michigan State, a conference tournament championship would also be a nice prize before the Wolverines set their sights on another deep NCAA run. Michigan lost to Villanova in the national championship game last season.