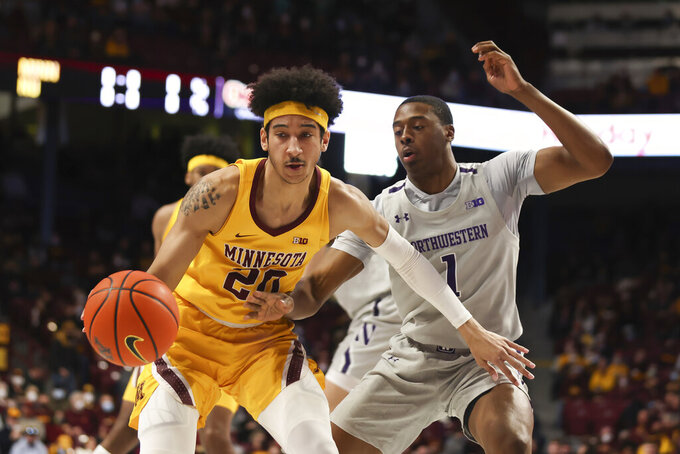 MINNEAPOLIS (AP) — Luke Loewe scored 24 points, Jamison Battle had 21 points and 14 rebounds, and Minnesota cruised to a 77-60 victory over Northwestern on Saturday.

Loewe made 9 of 13 from the floor, including six 3-pointers, and had seven assists. Battle collected a fourth double-double on 8-of-13 shooting to go with a career-high five assists.

E.J. Stephens added 15 points and Sean Sutherlin 11. The pair had a combined nine assists for Minnesota (13-12, 4-12 Big Ten), which has won two of its last four since ending a five-game losing streak.

Minnesota used an 11-0 run for an 19-8 advantage and had a 43-27 lead going into the break. Loewe and Stephens each made three of the Golden Gophers' eight 3-pointers in the half. Battle and Loewe had 11 points apiece and Stephens had nine.

Minnesota was without Payton Willis due to COVID-19 health and safety protocols. Sixth-year senior Eric Curry played despite flu-like symptoms unrelated to COVID-19. Curry finished with three points in 25 minutes.

Minnesota faces No. 15 Wisconsin at home on Wednesday. Northwestern will look to snap a three-game skid when it hosts Nebraska on Tuesday.