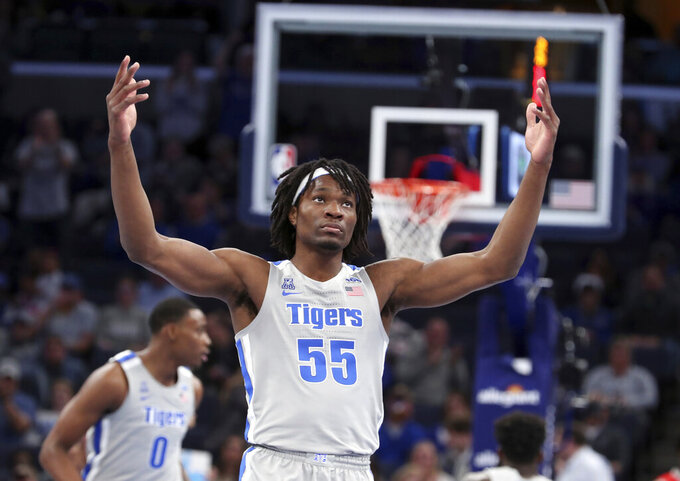 Memphis forward Precious Achiuwa (55) reacts after making a shot in the first half of an NCAA college basketball game against Bradley Tuesday, Dec. 3, 2019, in Memphis, Tenn. (AP Photo/Karen Pulfer Focht)

“It was a terrible game for us,” Lomax said, later adding: “We don’t look at this as a good game at all. This was a bad game for us.”

On a night of bad shooting performances, Lomax — a leader on the team with the top recruiting class in the country — was the one of only two Tigers to make more than half his shots, going 4 of 7 from the field while adding 9 of 12 free throws.

“I feel like I’m back to being myself,” said Lomax, who struggled to adapt to the college game last season. “I’m comfortable and trying to do my best to lead this team.”

Boogie Ellis scored 12 points for the Tigers, while Tyler Harris and DJ Jeffries added 10 points each for Memphis (7-1). Precious Achiuwa had an off-night scoring with only six points, but he grabbed 14 rebounds and blocked five shots. Lomax also had three steals.

“It was a struggle offensively for us all night,” Bradley coach Brian Wardle said, adding “we rebounded the ball well. We only had seven turnovers. We won the turnover war and rebounding war, and I never think we lose a game if we do that.

“But that’s how poorly we shot the ball.”

Bradley’s top offensive players had tough nights. Leading scorer Darrell Brown entered averaging 14 points per game but was limited to four. He missed all eight of his 3-point tries and was 1 of 16 from the field. Nate Kennell was held to two points a week after hitting 6 3-pointers in a win over Kansas State.

“We went into the game trying to contain Darrell Brown and Nate Kennell,” Memphis coach Penny Hardaway said. “We did an excellent job on those two guys, but Elijah Childs had 21 points and 14 rebounds.”

Wardle said Brown “just had an off-night offensively. That’s all.”

Bradley: The Braves struggled from the field throughout, missing 10 straight during the first half and coming out of halftime on a 1-of-13 skid. The misfiring, despite the Braves outrebounding Memphis, allowed the Tigers to build the lead to double-digits in the second half.

Memphis: The Tigers improved in the second half — only slightly. Eventually, Memphis’ speed and ability to get out on the break overcame its poor shooting as Lomax provided a spark off the Memphis bench. But the Tigers gave up 23 offensive rebounds as the Braves won the boards 55-47.

Ellis took a hard fall in the second half when he was fouled on a dunk attempt. Already facing the 12-game suspension of center James Wiseman and starting guard Lester Quinones out with a broken right hand, the Ellis spill worried Hardaway.

“It was an ugly fall because he hit like, all back on the floor. So, he’s going to be really sore tomorrow. ... We don't need any more injuries.”

"The effort was there. The competitiveness was there. Unfortunately, we could not buy a basket." Bradley coach Brian Wardle

Memphis: Plays at UAB on Saturday