Looking for Cinderella? Check out Anteaters and the South 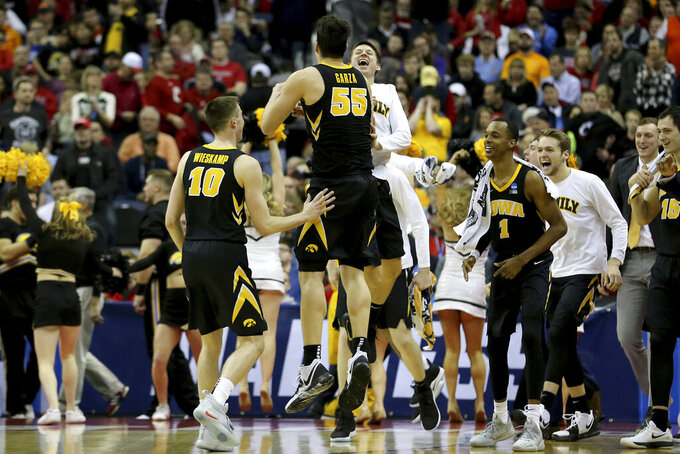 COLUMBUS, Ohio (AP) — Can anyone carry the Loyola-Chicago mantle deep into this NCAA Tournament? Is there a double-digit seed left that's capable of grabbing the nation's imagination? Maybe one with an unusual nickname?

Check out the South Region.

There sits a big underdog with a distinctive mascot — the only anteater in the bracket, let alone the entire country — and more double-digit seeds still standing than in any other region. And at least one of them is guaranteed to make the Sweet 16.

The No. 13 Anteaters have the highest seed left in the tournament. They're coming off a 70-64 win over Kansas State, and they face No. 12 Oregon on Sunday in San Jose, so one of them is headed for the Sweet 16.

The other double-digit seed in the South — No. 10 Iowa — knocked off Cincinnati in its opener and will face Tennessee on Sunday in Columbus.

Which of them has the ingredients to go viral in March? The Anteaters — OK, make that the 'Eaters, as they call themselves — have some things in common with those Ramblers of last year.

Loyola-Chicago was a No. 11 seed in the same region. The Ramblers also beat Kansas State — another connection — to reach the Final Four. With the beloved nun Sister Jean rooting from courtside, the Ramblers became the nation's basketball darlings and only the fourth No. 11 to reach a Final Four.

The Ramblers weren't even second fiddle in the Windy City. The 'Eaters? Way down the pecking order in the Golden State. So there's that parallel, too.

"UC Irvine folks, I don't know, live in the shadow, live like little brothers to UCLA and SC and maybe some others, Cal, Stanford, San Diego State," ninth-year Anteaters coach Russell Turner said. "Well, little brother has been in the weight room getting better, getting ready for a chance like this."

The South bracket feels more open than the others.

The winner of UC Irvine-Oregon will head to Louisville to face either No. 1 Virginia or Oklahoma in the Sweet 16. Virginia has shown itself capable of being on the wrong end of a big upset, becoming the first No. 1 to lose to a 16th seed last year against UMBC. Virginia struggled to get past Gardner-Webb in an opening game on Friday.

One more notable thread in the South: Virginia was in Loyola-Chicago's bracket last year.

An upset by the Anteaters would give basketball fans time to get acquainted with their unique name. Students voted in 1965 to become the first school represented by an anteater.

"It's very unique," guard Evan Leonard said. "It's very different. But you know we usually like to take off the 'ant' and just say 'Eaters.' So I feel like 'Eater Nation,' stuff like that, is pretty cool."

What about folks who also want to give them that Cinderella label?

"We don't see ourselves that way," guard Robert Cartwright said. "But we understand that might come with our seeding."

Some other things to watch Sunday as the East Region wraps up the weekend:

'EATERS' FOE: Oregon has much more of an NCAA pedigree than UC Irvine, but the Ducks also were a long shot to make the tournament. They upset No. 5 Wisconsin — the only Big Ten team to lose in the opening round out of eight entrants from the conference — and are looking to extend their surge that includes the Pac-12 Tournament title as part of a nine-game winning streak.

ON THE ROAD AGAIN: Iowa felt like it was playing a road game during the Hawkeyes' 79-72 win over Cincinnati with thousands of Bearcats fans packing Nationwide Arena. Tennessee also will have a lot of fans on Sunday, turning it into something other than a neutral court. Iowa is trying to reach the Sweet 16 for the first time in 20 years.

NO, VIRGINIA, NOT AGAIN: The Cavaliers will have that historic upset hanging over their heads until they make it deep into the tournament. Next up: No. 9 seed Oklahoma, which ran up a season-high in points for a 95-72 win over Mississippi State.

Oklahoma doesn't want any of those longshot comparisons.

"I don't want to say this is a Cinderella story," senior guard Christian James said.