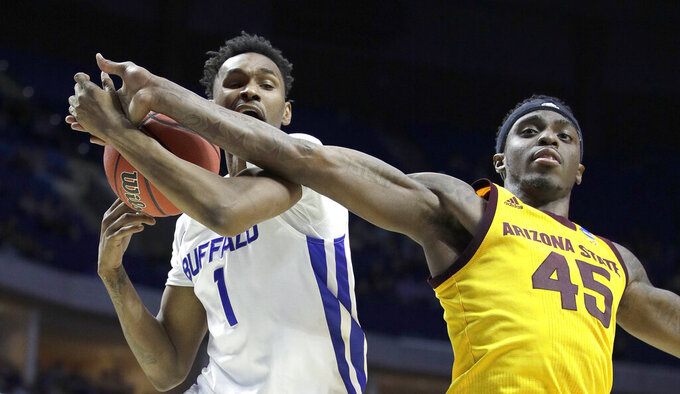 Buffalo's Montell McRae (1) and Arizona State's Zylan Cheatham (45) battle for a rebound during the first half of a first round men's college basketball game in the NCAA Tournament Friday, March 22, 2019, in Tulsa, Okla. (AP Photo/Charlie Riedel) 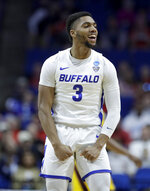 TULSA, Okla. (AP) — Looking like a No. 6 seed no one wants to play, high-scoring Buffalo breezed into the second round of the NCAA Tournament for the second straight year.

Jeremy Harris and Nick Perkins each had 21 points and 10 rebounds, and Buffalo shrugged off 11th-seeded Arizona State 91-74 on Friday in the West Region.

"I'm really proud of our guys," Bulls coach Nate Oats said. "They showed their experience. We kind of settled in there after about the first eight minutes on defense and forced some tough shots."

Oats has pushed the Buffalo program to new heights since he took over for Bobby Hurley, who now coaches the Sun Devils and was schooled by his former assistant. The Bulls (32-3), who earned the highest-ever seeding for a Mid-American Conference team, have won 13 straight and will face No. 3 seed Texas Tech on Sunday.

They may be a mid-major, but they're no Cinderella.

It was a bounce-back performance for Perkins, who had just five points in 22 minutes in the MAC Tournament final, an 87-73 win over Bowling Green.

"I was kind of rushing things, rushing my shot, just rushing my play," Perkins said of the previous game. "I think tonight I was able to slow down a little bit mentally and just convert."

Zylan Cheatham had 22 points and eight rebounds before fouling out with 2:06 remaining for Arizona State (23-11), which defeated St. John's 74-65 on Wednesday in the First Four. Romello White and Luguentz Dort each scored 12.

"I'm super proud of my guys and the effort and the season that they have had," said Hurley, whose team finished second in the Pac-12 in the regular season. "They have taken another big step for Arizona State basketball, and in the process, they've poured their heart and soul into our culture, which is going to filter through future Arizona State basketball teams."

The Sun Devils led 14-10 early, but then Buffalo reeled off a 14-2 run over a three-minute span. The Bulls outscored Arizona State 10-5 over another three-minute stretch to push their advantage into double digits.

"They were quicker to the ball than we were in the first half and their pressure is disruptive," Hurley said. "Their guards get after you and pressure you, so they take you out of your offense."

Arizona State trailed 44-31 at halftime and pulled within 46-37 early in the second half before Buffalo's 7-0 run pushed its lead to 16 with 16:13 remaining. The Bulls' advantage never fell below 14 the rest of the way.

"We knew that they just finished a game the other day, but we wanted to keep the pace at our speed," said Buffalo guard Jayvon Graves, who scored 13 points. "We are confident. We did this last year. This year, we were expected to win this one, but the next game, we are the underdogs again."

Arizona State: Dort, the Sun Devils' leading scorer, entered averaging 16.2 points per game but endured a difficult afternoon. Eight of his 12 points came in the final six minutes with the game already out of reach. The Pac-12 freshman of the year shot 4 of 12 overall and 1 of 7 from 3-point range.

Buffalo: Hurley went 42-20 in two seasons at Buffalo, leading the Bulls to the NCAA Tournament for the first time in 2015 before leaving for Arizona State. Oats was promoted to head coach and has since won three more MAC titles. The Bulls reached the second round of the NCAA Tournament for the first time last year, and now they hope to take the next step.

"I thanked him for everything he done for my career before the game," Oats said of Hurley. "He's a good friend. We kind of said on Sunday night when we talked, 'Let's be friends before and compete like crazy.' I think we both coached really hard. I just tried not to look down the other way and just coach the game. Try not to worry about coaching against a good friend. Just worry about coaching my team and our players."

Buffalo faces Texas Tech, which beat 14th-seeded Northern Kentucky, in the second round on Sunday.