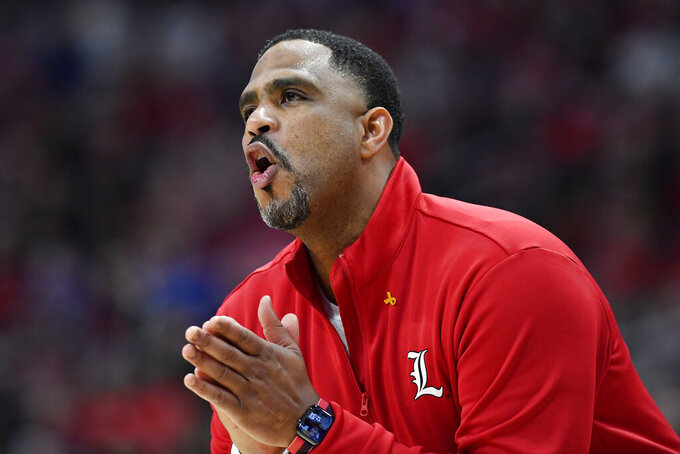 LOUISVILLE, Ky. (AP) — Louisville’s athletic board executive committee has approved a new contract for men’s basketball interim coach Mike Pegues that includes a guaranteed bonus of $340,000 and other incentives.

The University of Louisville Athletic Association executive board approved the proposed bonus package in a special meeting on Tuesday. Pegues, whose interim status won't change, took over the Cardinals for the second time last Wednesday after head coach Chris Mack and the school agreed to part ways.

Pegues guided Louisville (11-10, 5-6 Atlantic Coast Conference) to a 5-1 start while Mack was suspended and began his second stint with a 74-65 loss to No. 9 Duke on Saturday.

Interim athletic director Josh Heird said the contract recognizes the combination of what Pegues did at the beginning of the season and what he’s doing now.

Pegues’ current contract as an assistant coach paid a $340,000 base annual salary through April 2024 and included bonuses if the Cardinals won the ACC regular and tournaments, reached later rounds of the NCAA Tournament and won the national championship.

The new deal, effective Jan. 27, runs through June 30. It retains his base salary and increases the bonus for winning the ACC Tournament from $15,000 as an assistant to $125,000 as interim coach. A $15,000 bonus is within reach for Pegues by winning eight ACC regular season contests. Non-cumulative bonuses range from $50,000 up to $500,000 with five NCAA Tournament wins.

Heird said the search for Louisville's next coach will continue despite Pegues' new contract, reiterating his intention to choose Mack’s replacement.

“It’s going to take some time” to vet highly qualified candidates, Heird said, adding when asked if Pegues would be considered with a strong finish, “the qualification is a good basketball coach as far as who’s going to be our next basketball coach.”