Louisville, Chris Mack back in NCAAs sooner than expected 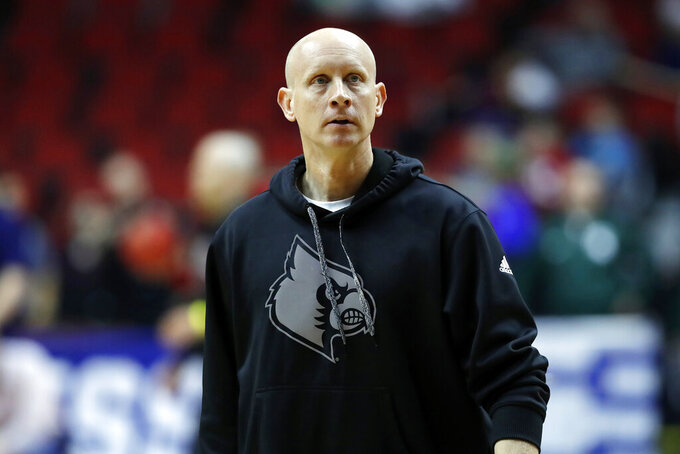 But the Cardinals adopted a motto of sorts — "working hard and being tough" — and they have done just enough of both to get back to the NCAA Tournament after a turmoil-filled season in 2017-18. Picked to finish 11th in the 14-team ACC in the preseason under new coach Chris Mack, Louisville will face 10th-seeded Minnesota (21-13) on Thursday in the East Region as the tourney gets rolling in earnest.

"We were a resilient group," said guard Christen Cunningham, a graduate transfer from Samford averaging 9.8 points per game. "We had a really tough schedule. We knew that coming into the year, but we took the motto of being stronger together and unbreakable and we used being 11th as a chip on our shoulder for motivation."

Hall of Fame coach Rick Pitino was fired before the 2017-18 season after the school acknowledged its involvement in a federal corruption investigation of college basketball and the NCAA stripped the Cardinals of their 2013 NCAA championship last February as discipline for a sex scandal. The Cardinals also lost point guard Quentin Snider and three other starters from a 22-14 team that reached the NIT quarterfinals under coach David Padgett.

Louisville then poached Mack from Xavier, where he was 215-97 in nine seasons. Most believed the Cardinals might need some time to get back to where they once were after losing four starters, but it hasn't worked out that way.

"It's no secret that when I took over there wasn't the greatest light around the program," Mack said. "I told our players in the very beginning when I met with them that they weren't the cause for it, but they could certainly be the cure for it. I think anybody that's watched us play this year, I've asked our players to be this way."

Louisville, behind Cunningham, an improved Dwayne Sutton and a breakout season from sophomore Jordan Nwora (17.2 points per game), didn't waste time, either. The Cardinals stunned Michigan State 82-78 in overtime early in the season. Close losses to Tennessee and Marquette before that had given the players the confidence they needed for the Spartans — and the slog ahead.

The Cardinals (20-13) won six straight in ACC play in January before going just 2-6 in February, a stretch that included a crushing home loss to Duke. Louisville rallied though, notching a pair of wins over Notre Dame — sandwiched around a close loss at top-seeded Virginia — to secure their place in the NCAA Tournament.

These Cardinals don't have a ton of tournament experience; no starter has played in an NCAA game. But they are a favorite against the Golden Gophers, and if Louisville can survive the first round there could be a rematch ahead with a Michigan State team the players know they can beat.