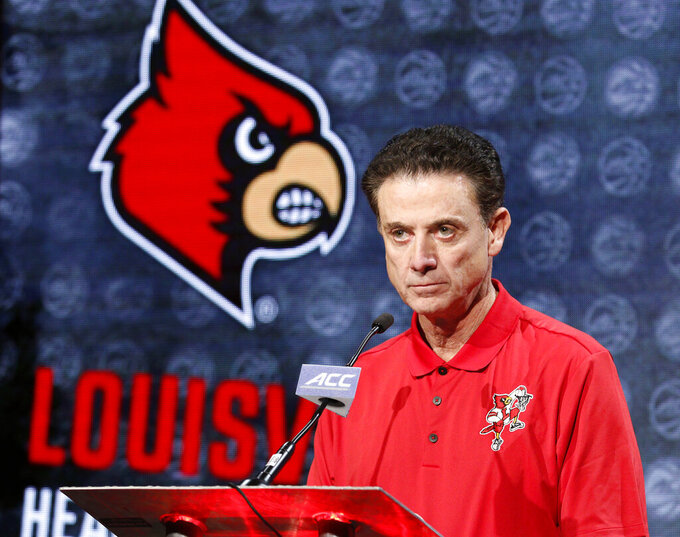 An independent panel placed the Cardinals' basketball program on two years of probation and fined it $5,000, but spared the school major penalties from NCAA allegations leveled in the aftermath of a federal investigation into corruption in college basketball.

The Independent Accountability Resolution Process (IARP) also declined on Thursday to penalize former Cardinals coach Rick Pitino, whom the NCAA initially cited for failure to promote an atmosphere of compliance. Chris Mack, Pitino's successor who was fired in January, also was not penalized for additional allegations announced last year by the NCAA.

“The panel views this decision as exonerating both coaches,” IARP chief panel member David Benck said in a conference call with reporters.

Pitino, now the coach at Iona, thanked the IARP for its fairness and reiterated his adherence to the rules.

“So, do I feel vindicated? It's not really that important anymore because it's been five years,” Pitino said in a conference call.

“We were hopeful of a successful outcome through this process, and that’s what we received,” Cardinals athletic director Josh Heird said in a news conference with Louisville's acting president, Lori Gonzalez.

The IARP was created out of proposals from a commission led by former U.S. Secretary of State Condoleezza Rice in 2018 to reform college basketball. The panel’s decision cannot be appealed.

The NCAA in May 2020 accused Louisville of committing a Level I violation for an improper recruiting offer and several Level II violations. Pitino was accused of failing to promote an atmosphere of compliance — an accusation the IARP concluded was unfounded.

The NCAA case followed a federal investigation announced in September 2017 that involved numerous college basketball programs accused of giving illicit cash to recruits. The school acknowledged it was the subject of allegations related to the recruitment of Brian Bowen II.

Louisville had previously been placed on NCAA probation because of a sex scandal. Thursday's decision by the IARP put the latest disciplinary matter to rest for a school that has endured several scandals since 2015.

“The panel felt that the institution and the coach were hypersensitive on compliance issues coming right on the heels of the prior case,” Benck said.

The IARP also recently announced minor sanctions against Memphis in a similar case, signaling that the era of harsh NCAA penalties may be coming to an end with college athletes now allowed to make money off their name, image and likeness. Kansas is still under investigation by the IARP as a result of the federal probe, and this week it self-imposed a four-game suspension on coach Bill Self while reiterating the program's commitment to the Hall of Famer.

Cases tied to the federal probe involving Arizona and LSU are still pending with the IARP. NCAA vice president of hearing operations Derrick Crawford expects those to be completed by next spring or early summer.

In the Louisville case, federal prosecutors alleged that Adidas representatives funneled $125,000 to a recruit’s family to get him to attend the school. Pitino was not named in the federal complaint and repeatedly denied authorizing or knowing of any payment to a recruit.

Benck also rejected NCAA allegations that Adidas, as Louisville's sportswear partner, was acting on behalf of the school's athletic interests.

“It was our interpretation that it was merely their own brand promotion,” Benck said. “On top of that, the institution never requested any assistance with recruiting in our opinion, had no knowledge of any assistance that the apparel company provided.”

The Hall of Fame coach and athletic director Tom Jurich were fired in the wake of the federal complaint. That episode occurred with Louisville on NCAA probation after a 2015 sex scandal in which a basketball staffer was alleged to have hired strippers to entertain recruits and players.

Louisville's sanctions from that scandal included vacating 123 victories, including its 2013 men’s basketball championship and 2012 Final Four appearance — both under Pitino.

College sports’ governing body amended its Notice of Allegations in September 2021 for violations committed under Mack during the 2020-21 season. The NCAA accused the program of impermissible activities and said Mack did not promote an atmosphere of compliance.

Mack was fired in January after three-plus seasons and eventually replaced by former Cardinals player and Kentucky assistant Kenny Payne. Mack's final season began with a six-game suspension by the school for failing to follow university guidelines in handling an extortion attempt by fired ex-assistant Dino Gaudio.

University officials pushed back against the accusations and noted coaching and administrative changes among their corrective measures.

The IARP’s decision closes a long period in which Louisville has been stifled competitively, administratively and financially. The Cardinals’ lone NCAA Tournament appearance since Pitino’s departure came in 2019, and the revolving door of coaches has limited Louisville on the recruiting trail.

“It’s finally over," Heird said. “There’s been a cloud over this program for five years now, whether it’s recruiting or just the fans feeling the impact of it, the staff, the athletic staff, the university staff. For all of that to just be lifted today. ... It's relief.”