Louisville rallies to wear down Miami 90-73 in ACC play 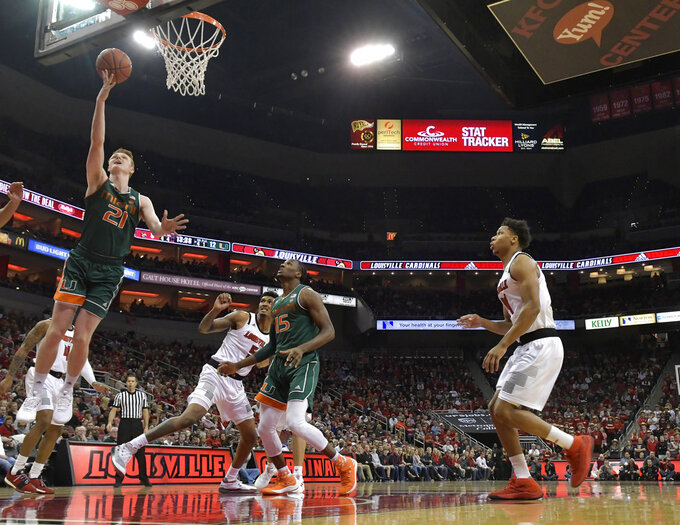 Miami forward Sam Waardenburg (21) goes up for a layup during the second half of an NCAA college basketball game in Louisville, Ky., Sunday, Jan. 6, 2019. Louisville won 90-73. (AP Photo/Timothy D. Easley) 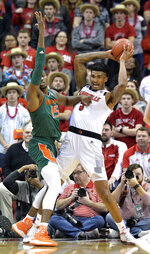 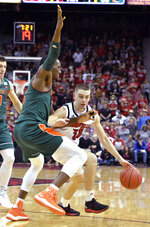 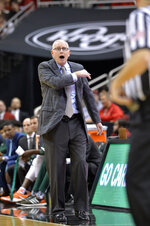 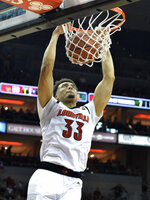 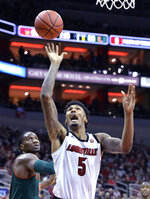 LOUISVILLE, Ky. (AP) — Louisville knew it had time, manpower and shooters to overcome Miami. The challenge was finding the focus needed to make those factors work.

Once the Cardinals finally dialed in mentally, they didn't miss a beat.

Jordan Nwora scored 18 of his 20 points before halftime, Malik Williams finished with a career-high 19 and Louisville overcame a 15-point deficit to rout Miami 90-73 on Sunday night and give coach Chris Mack his initial Atlantic Coast Conference victory.

Returning to action eight days after their home loss to rival Kentucky, the Cardinals (10-4, 1-0 ACC) figured to be more refreshed than a short-handed Hurricanes squad playing its second league game. Instead, they found themselves battling back from a slow start and fortunate to only trail 41-40 at halftime thanks to Nwora's hot shooting, especially from 3-point range.

"I would think our energy level would be much greater," Mack said. "We made a few too many turnovers early, and I don't think we made one in the second half. I don't think we played with enough energy and enough communication on a couple of our switches."

Things were much different over the final 20 minutes.

Louisville started the second half just 5 of 13 from the field but eventually earned a 53-50 lead when Christen Cunningham made consecutive 3-pointers.

The 6-foot-11 Williams — who topped his previous career best of 17 points — and Ryan McMahon (12 points) soon found their stroke to help the Cardinals build an 18-point lead. Louisville also shot 48 percent to remain unbeaten in five home meetings against Miami (8-6, 0-2).

Dejan Vasiljevic and Zach Johnson each had 19 points and Chris Lykes 18 for the 'Canes, who shot 43 percent and missed another chance to earn its first Power 5 victory this season.

It wasn't without effort for Miami, which normally uses a seven-man rotation. Even as the Hurricanes' lead was slipping away, they'd get a timely basket or rebound to keep a slim edge until Louisville started doing the same.

"They got several offensive rebound baskets that really hurt us," said coach Jim Larranaga, whose team was outrebounded 15-11 offensively. "Then we just ran out of gas. We can score, but we can't rebound with a team that size."

Known as a perimeter threat, McMahon entered the game just 4 of 22 from long range over the past six contests. The junior guard missed his first six against Miami before hitting his final three in addition to dishing out a career-best nine assists.

"I remember passing up a pump-fake and passing to (Cunningham) and he ended up making a shot," McMahon said, "and coach still got mad at me for passing up the shot.

"He was telling me, 'Shoot! Shoot!'. ... I had a lot of confidence in myself, but when teammates and coaches have that confidence in you too, it's the best."

Miami: Much like they did against North Carolina State on Thursday, the Hurricanes jumped out to a double-digit lead behind a quick pace and sharp shooting, especially from beyond the arc. But fouls and depth quickly became a problem by halftime with Anthony Mack's three fouls leading four players with at least two apiece. Nobody fouled out, but the ending was familiar as Louisville wore them down in the second half.

Louisville: The Cardinals started sluggish after a weeklong break and needed the whole half to match Miami in pace and on the scoreboard. They eventually finished 13 of 31 from behind the arc (42 percent) and edged the 'Canes 39-35 on the glass thanks to a little more depth. Dwayne Sutton added 13 points as five scored in double figures.

Miami stays on the road to visit in-state rival Florida State on Wednesday.

Louisville begins a two-game road stretch on Wednesday at Pittsburgh.