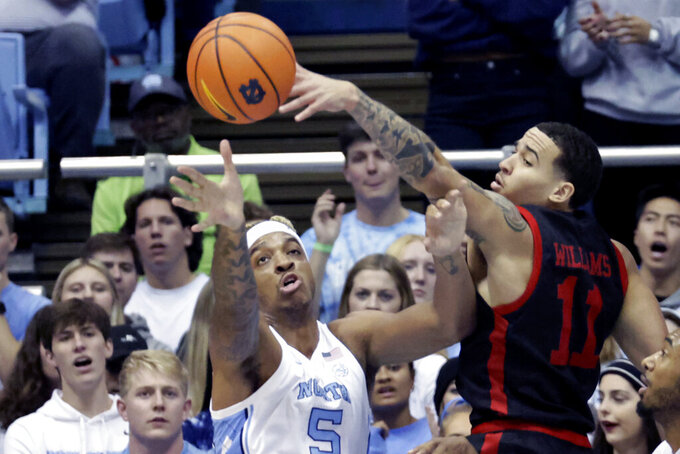 CHAPEL HILL, N.C. (AP) — Barely a week into the season and there’s impatience for No. 1 North Carolina.

The Tar Heels can hardly wait to get better and start showing it.

“We’re used to it by now,” guard Caleb Love said. “We’re only three games in, but the mistakes we’re making at both ends of the court are unacceptable. We’re going to fix it. It’s everybody.”

RJ Davis scored on consecutive possessions down the stretch and finished with 14 points and 10 rebounds for the Tar Heels (3-0). Armando Bacot added 10 points.

“Proud of our guys for the fight,” Gardner-Webb coach Tim Craft said. “We wanted this game to be a grind and be a halfcourt game.”

“Having that freedom to enjoy being a part of this program and playing on this team and trying to become the best that we can become,” he said. “I think that’s the No. 1 thing that has to improve and has to change.”

After trailing by 16 in the second half, the Runnin’ Bulldogs were within 60-54 with less than four minutes to play. Nance fouled out on an offensive charge at the 3:38 mark.

Davis made two free throws with 1:22 left after Gardner-Webb had two possessions go awry with a chance to cut into a 61-56 hole. Davis made a jumper on North Carolina’s next possession.

Craft said the disappointing part was the inability to make it a one-possession game in the waning minutes.

“It will get better,” Nance said. “Getting everybody on the same page. Getting the jitters out.”

Love, who had three points at the half, scored eight points during North Carolina’s 10-0 start to the second half. He made his first five shots of the second half after going 1-for-5 before the break.

“We have to stick to the script,” Craft said.

Nance racked up 14 of North Carolina’s first 18 points. That exceeded his total points (13) from the first two games.

North Carolina led 26-22 at halftime despite shooting 29% from the field. Aside from Nance’s 5-for-7, the Tar Heels were 4-for-24 while Gardner-Webb held an 18-4 edge in points in the paint.

Nance made three 3s in the first 10 minutes helping North Carolina go up 15-8 as Gardner-Webb endured a scoring drought of nearly five minutes.

This was the first game in double figures for Nance with the Tar Heels. He reached that mark in 54 of 107 games in four seasons with Northwestern.

“It’s definitely good to see the work pay off and see some shots go in,” he said.

Coach Davis wanted to see more shots. He was miffed that the Tar Heels didn’t deliver the ball in better sports for the forward in the second half, when he attempted only two shots.

“If I had 16 in the first half and I only had two in the second half, there would be some discussions with my teammates,” Davis said.

Gardner-Webb: The Runnin’ Bulldogs have lost three road games, but they’ve been competitive in each of them. They were the aggressors for much of the first half and that’s bound to be a good sign for a team that will have seven games away from home before a home game in Boiling Springs.

North Carolina: The Tar Heels aren’t picking up many style points, but they are unbeaten after three home games. They’ve shown the ability to shift into a higher gear as these games have unfolded. They finally outrebounded an opponent, but the margin was only 40-38.