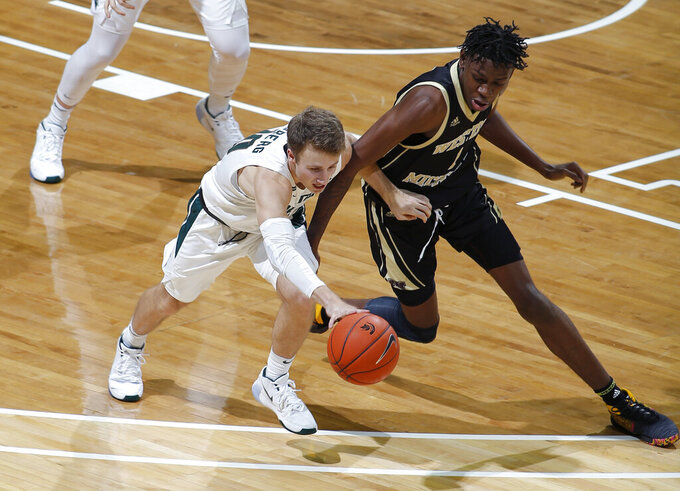 And though they are a far cry from senior All-American Cassius Winston, Foster Loyer and Jack Hoiberg acquitted themselves quote nicely for the Spartans.

Loyer scored 16 points, taking over at point guard with Winston sidelined after bruising a bone in his left knee during practice Friday.

The sophomore scored four points and did not make a field goal, but Hoiberg’s impact was real in the first non-garbage minutes of his career.

“Obviously, with Cassius out, that’s a lot of minutes we have to fill,” Hoiberg said. “I’ve been waiting for the opportunity. This was it, and I had to step up a little bit.”

Loyer scored 11 points in the second half and was 4 for 4 on 3-pointers. He had three 3-pointers during a stretch in which the Spartans pushed the margin past 40 points, topping out at 89-44 with 4:44 remaining.

“That’s pretty special. They move the ball so good,” Western Michigan coach Steve Hawkins said. “Cassius is so good, but also is really, really good with the ball. They’re a different team when Cassius isn’t in, and the ball got shared really well.”

Western Michigan: The Broncos need a bounce-back season in the Mid-American Conference for Hawkins. They went 8-24 last season, the worst record in his first 16 seasons at Western Michigan.

Michigan State: Assuming Winston’s absence was more precautionary, the Spartans are rounding into more of a typical Izzo team, unlike early on when they were embarrassed 87-75 by Duke at the Breslin Center.

Izzo did not appreciate being outscored 18-6 in the game’s closing minutes and said his reserve post players were disappointing.

“I made a big point about how they have be physical, run up and down,” Izzo said. “That was embarrassing the way they ran us to death.

“They had dunks. I’m not even going to name them, but I’m going to tell you that it’s going to be a bad day (Monday) for those bigs. Because I am totally disappointed in them. When I say it that strongly publicly, I mean it.”

Sophomore Thomas Kithier and freshman Julius Marble entered the game together with 5:10 remaining and were on the court for most of the WMU finish.

Izzo’s walk-on freshman son, Steven, even got in on the act, playing point guard for the final 2 minutes.

He made an assist and attempted his second career 3-pointer, but is still scoreless at MSU.

MSU Freshman Rocket Watts returned to the court after missing four games with a leg injury. He scored nine points in 12 minutes and added five assists, and also played some point guard minutes after just practicing twice in the past few weeks.

“It felt real good to get back playing with my brothers,” Watts said.

WMU's White was playing at his dad’s alma mater, as Benny White played for the Spartans from 1972-76.

Western Michigan: It’s MAC opponents the rest of the way for the Broncos, who open conference play Saturday at home against Ohio.

Michigan State: The Spartans host Illinois on Thursday and No. 11 Michigan on Jan. 5.