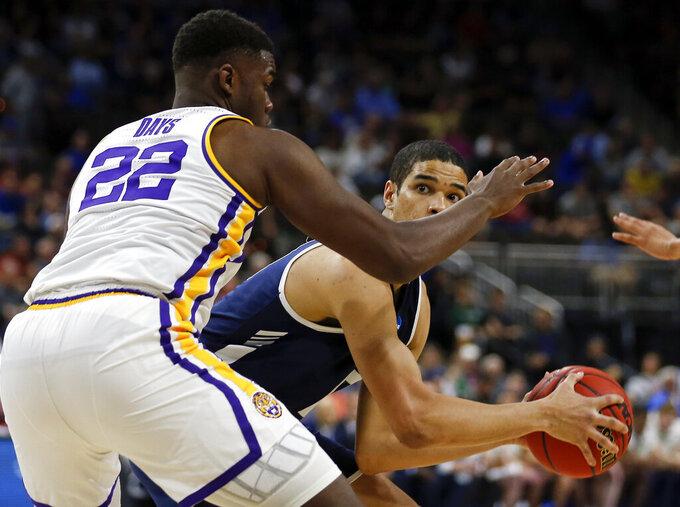 Yale 's Paul Atkinson, right, looks for a shot over LSU's Darius Days (22) during the first half of a first round men's college basketball game in the NCAA Tournament in Jacksonville, Fla., Thursday, March 21, 2019. (AP Photo/Stephen B. Morton) 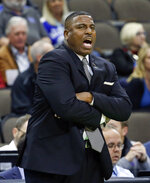 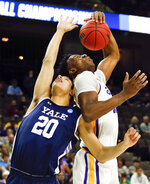 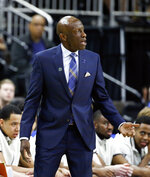 JACKSONVILLE, Fla. (AP) — As LSU's comfortable lead started to disappear, most of the crowd at Veterans Memorial Arena turned on the Tigers.

Underdog Yale became the hometown team in the opening round of the NCAA Tournament.

Skylar Mays heard the cheers — and then silenced them.

With suspended coach Will Wade watching from afar, Mays hit four free throws in the final 15 seconds to help embattled LSU slip by 14th-seeded Yale 79-74 in the East Region on Thursday.

Mays scored 12 of his 19 points in the second half and sealed the game from the charity stripe. The third-seeded Tigers (27-6) needed each one of his free throws.

"We were fortunate to pull this one out," interim coach Tony Benford said.

Yale (22-8) hit four 3-pointers in the final minute, helping whittle an 18-point deficit to three in the closing seconds.

With the lead on the line, Mays stepped to the line and sank all his shots.

"I don't know if we were pointing fingers at one another, we had some defensive breakdowns and I think guys were challenging their teammates," Benford said. "We talk about that, taking ownership and keeping one another accountable. We tried to do that, but I think they were able to regroup through all that and through adversity to make some free throws."

Mays was one of four Tigers in double figures. Tremont Waters finished with 15 points, but the team's leading scorer had just two after the break. He was 0 for 7 from the field in the final 20 minutes after dominating the first half with 13 points and six assists.

Naz Reid had 14 points and 10 rebounds. Kavell Bigby-Williams also had a double-double with 10 points and 10 boards. LSU made the most of its size advantage, outscoring Yale 40-30 in the paint.

LSU moves on to the second round without Wade and will face Maryland. Wade is suspended indefinitely for his role in an alleged cheating scandal. University officials won't let Wade resume his duties unless he speaks with the school about an FBI wiretap that resulted in his suspension.

Javonte Smart, whose name surfaced in reports of a wiretapped phone call that resulted in Wade's suspension, had nine points and six rebounds. School officials say Smart has fully cooperated in a "joint inquiry" with LSU and the NCAA.

Alex Copeland led Yale with 24 points. He had 16 points in the second half and hit two of the huge 3s in the final minute to make it close.

Jordan Bruner added 16 and Azar Swain finished with 12. Leading scorer Miye Oni was 2 of 16 shooting, including 1 of 10 from 3-point range, and had five points.

The Ivy League champions, who led their conference in 3-point shooting, were 8 of 37 from behind the arc.

"Obviously, we didn't shoot as well as we wanted to of normally do," coach James Jones said. "But the energy and effort was there. Tip your hat to LSU. They were able to hold on to the lead and knock down their free throws."

Yale: The last Ivy League champion to win an NCAA Tournament game, Yale failed to pull another first-round upset. The Bulldogs knocked off Baylor in 2016 and then gave Duke a scare in the second round, cutting a 27-point deficit to three in the final minute. Copeland, Trey Phills, Blake Reynolds and Thomas Ryans were freshmen on that team, although they did little to get Yale into the tourney. They hoped to create their own tournament legacy against the Tigers, but came up short.

LSU: The Tigers have enough talent inside and out to beat anyone. They tend to struggle against teams that slow the tempo, but Yale wanted a fast-paced game, which played right into LSU's wheelhouse.

BAND ON THE RUN

North Florida filled in as Yale's band. Donning navy blue T-shirts with "Yale" emblazoned across the front, the Ospreys' pep band provided a musical accompaniment for the Bulldogs.

North Florida band director Stephen Putnam wasn't sure why Yale's band didn't come to the tournament, but he assumed it was because the school is on spring break and couldn't get all its members together. North Florida was thrilled to get a chance to attend the NCAA Tournament.

Yale has to replace three key starters — Copeland, Phills and Reynolds — before next season.

LSU advances to the second round for the second time in five years and will face Maryland on Saturday.