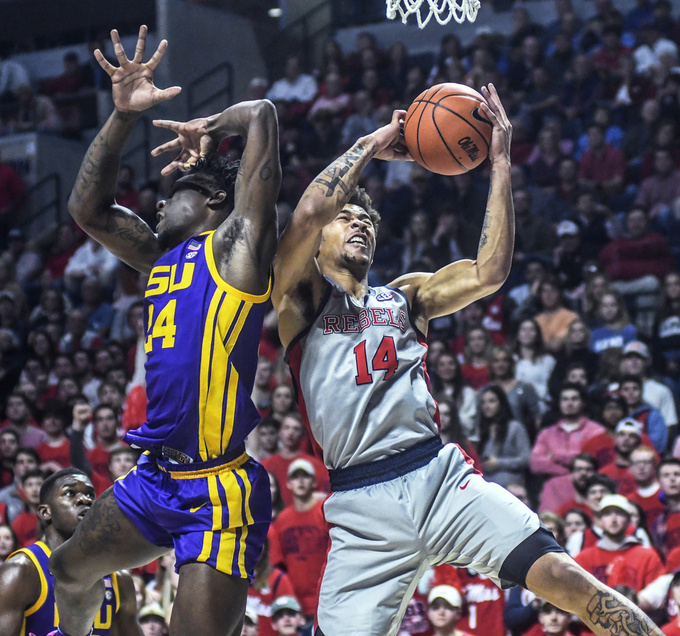 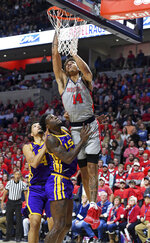 OXFORD, Miss. (AP) — Ole Miss freshman Blake Hinson went hard to the rim, rising up into the air to try and send home a huge one-handed dunk. The only problem was LSU's Kavell Bigby-Williams was right there to meet him, delivering a crushing two-handed block that crammed the ball back toward the floor.

The Rebels hadn't lost in nearly two months. That was about to change in a hurry.

The 6-foot-11 Bigby-Williams had arguably his best game of the season just a few days after one of his worst. He had no points and no rebounds in 18 minutes against Arkansas on Saturday.

"He finished everything at the rim. He was a presence down there," Will Wade said. "That's as good of a block as you'll see when he blocked Hinson."

LSU (13-3, 3-0 Southeastern Conference) used an early 8-0 run in the second half to take a 48-39 lead. The Tigers maintained a healthy advantage from that point, playing tight defense and forcing several turnovers. Bigby-Williams said he believed his early blocks helped set the tone.

"I think just my presence alone altered some shots," he said.

"One of those games," Ole Miss coach Kermit Davis. "We've got to let it go and have a short memory."

Neither team played particularly well in the first half, with LSU and Ole Miss both shooting 36 percent from the field. Tyree had 12 points before the break, and the teams went into halftime tied at 31.

Wade said LSU had much better ball movement in the second half, which led to the win.

"We were just way too stagnant in the first half," Wade said. "I thought the second half we moved the ball, moved their defense and made them guard us full court. We were able to get it down and finish in the paint."

Ole Miss has received a lot of national attention after two impressive wins over nationally-ranked Auburn and Mississippi State. Now it might be LSU's turn to get back into the spotlight.

The Tigers were highly-regarded at the beginning of the season, starting at No. 23 in the AP preseason poll. But three losses during nonconference play knocked them out of the rankings.

"We've got to earn our way back," Wade said. "Just like Ole Miss earned it with two top-15 wins last week."

Kermit Davis said guard Devontae Shuler has been battling a foot injury and will be evaluated on Wednesday. The 6-foot-2 guard finished with just six points in 31 minutes.

If Shuler misses any time, he would be difficult for the Rebels to replace. The team's rotation is usually only eight players deep.

"We don't have much margin for error," Kermit Davis said.

LSU: It's another good win for LSU, which has quietly established itself as one of the SEC's elite teams. The Tigers are extremely athletic in the post and should cause problems for plenty of teams around the league.

Ole Miss: The Rebels were probably due for some sort of regression and struggled in their return to the national rankings for the first time since 2013. They didn't play very well offensively, and their 16 turnovers were particularly costly. Ole Miss will still take its 3-1 league start, but a big home game against Arkansas looms on Saturday.