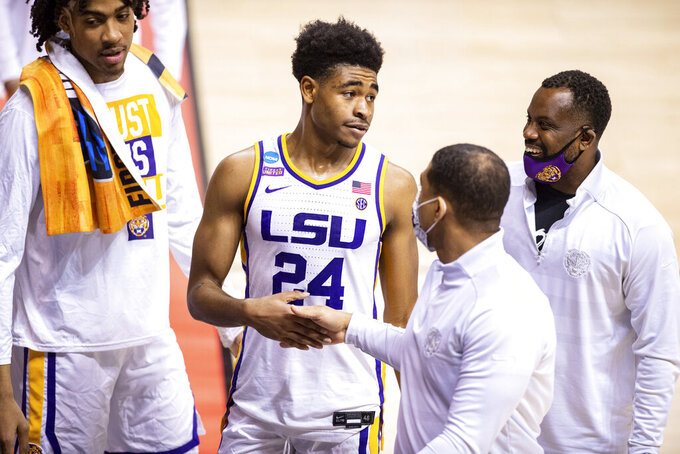 LSU guard Cameron Thomas (24) reacts to the team's win over St. Bonaventure as he leaves the court after a first round game in the NCAA men's college basketball tournament, Saturday, March 20, 2021, at Assembly Hall in Bloomington, Ind. (AP Photo/Doug McSchooler) 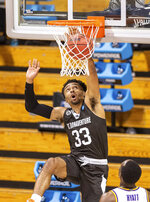 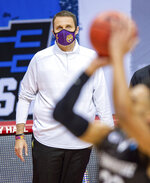 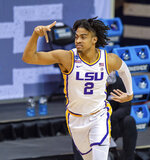 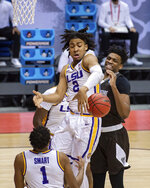 BLOOMINGTON, Ind. (AP) — Freshman Cameron Thomas scored 27 points in another impressive performance and his LSU teammates provided the rebounding muscle, leading the eighth-seeded Tigers past ninth-seeded St. Bonaventure 76-61 on Saturday and into the second round of the NCAA Tournament.

LSU (19-9) can reach its second straight Sweet 16 if it beats Michigan, the top seed in the Midwest Region.

“We can certainly play better, but I think we’ve played a lot more physical since the Vanderbilt home game," coach Will Wade said. “For us, it's about getting stops and rebounding, which we did a great job of."

Darius Days and Aundre Hyatt each had 13 points and Trendon Watford had 11. Days and Watford also had 11 rebounds each while Hyatt grabbed 10. The Tigers have won five of six.

LSU took control in the second half thanks to Thomas and his ability to get to the basket. He scored 25 or more points for the 15th time this season, which LSU says is a freshman Southeastern Conference record in the one-and-done era.

Jaren Holmes scored 18 points and Osun Osunniyi had 15 points and nine rebounds for St. Bonaventure (16-5). Jalen Adaway had 11 points in his home state.

The Bonnies still had a good time, hearing their contingent of fans chanting in the stands.

“We just played LSU in March Madness at Indiana University. This is a historical arena,” Holmes said. “While in the middle of a pandemic. This is something that I’ll be able to tell my children, talk about forever, honestly. This is a magical experience.”

Once the Tigers warmed up, the Bonnies never had a chance.

LSU started pulling away with a 9-2 spurt that gave it a 21-12 lead late in the first half, and when the Tigers opened the second half on a 12-2 spurt to make it 40-24, the Bonnies never got closer than nine.

St. Bonaventure: The Bonnies relied heavily all season on one of the nation's stingiest defenses. But on a day they shot poorly and got outrebounded 49-30, they couldn't contain the more athletic Tigers.

LSU: Wade's team seemed to be in sync throughout last week's SEC Tournament and was back at it for the final 30 minutes Saturday. The Tigers will need to play 40 strong minutes to get past Michigan and make a second straight Sweet 16.

St. Bonaventure and LSU were a combined 3 of 24 from the field during the first eight minutes, missing 12 straight 3s. There were other problems, too. Watford went to the bench with his second foul seven minutes into the game and guard Javonte Cook ended up there, too, after drawing his second — a technical foul with 10:40 left in the first half. St. Bonaventure guard Dominick Welch injured his right ankle in the first half before returning.

Watford knocked down one 3-pointer from the corner in front of the St. Bonaventure bench, a few steps away from where his older brother, Christian, made a buzzer-beating 3 to help Indiana upset then-No. 1 and undefeated Kentucky in December 2011. Trendon Watford was in the stands that day and his older brother was there Saturday.

“The Watfords love Assembly Hall. He was so excited to play here. And I was so proud of him to hit the 3 and play so well in this building that's so special to the family,” Wade said.

St. Bonaventure paused its activities on Nov. 19, delaying its season opener from Nov. 25 to Dec. 15. The Bonnies had six COVID-19-related cancellations during nonconference play and a rough start to February when they lost three times and had two cancellations in what was supposed to be a six-game stretch.

For LSU, COVID-19 protocols created a messy schedule. In addition to postponing three mid-December games because of health and safety protocols and losing Wade on Dec. 14 because of a positive test, the Tigers had eight additional postponements or cancellations, five rescheduled games and had seven of their last 10 regular-season games on the road.