LSU's Benford focused on the moment and players' experience 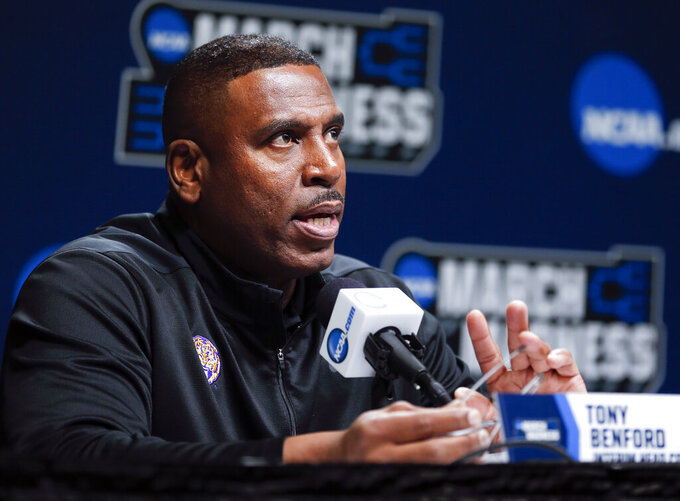 BATON ROUGE, La. (AP) — When LSU interim coach Tony Benford played for Texas Tech in the 1980s, his coach saw him as a physically imposing, two-way guard who possessed an unassailable work ethic, an unshakeable psyche and a knack for hitting game-winning shots.

Former Red Raiders coach Gerald Myers sees many of Benford's traits as a player serving him well now that he's responsible for guiding the Tigers through the NCAA Tournament in the wake of head coach Will Wade's indefinite suspension.

"Knowing Tony and his personality, they won't back down. They'll be physical. That's the way he was. He was a physical player. He played hard," Myers told The Associated Press by phone this week as third-seeded LSU (28-6) prepared to take on No. 2 seed Michigan State (30-6) in the East Region semifinals Friday in Washington, D.C.

"He's a confident guy. He is a competitor — one of the best we ever had," Myers said. "He knows what he had to do to get ready to play a game mentally and he's got the ability to pass that on. Of course, at this stage, it's a mental game."

Benford is a college basketball lifer who has coached — mostly as an assistant — at the Division I level for nearly three decades.

He has been on the staffs of good teams before. He was an assistant with a 2011 Marquette squad that advanced to the third round of the NCAA Tournament under then-head coach Buzz Willliams, who is back in the tournament's third round this season with Virginia Tech.

Yet when Wade was hired by LSU two years ago and began to put his staff together, he viewed Benford as a potentially valuable assistant because of his recruiting ties in Texas and parts of Louisiana, and because of his wealth of experience as both an assistant and head coach.

Benford suspects his recent head coaching experience is why LSU's athletic administration asked him to shepherd the Tigers into the postseason after Wade was suspended for troubling comments he made about his recruiting efforts on a phone call that was wiretapped as part of an FBI investigation.

Wade likely won't coach again this season for LSU — if ever. LSU has asked him to explain his comments that appeared in a transcript of a phone call published by Yahoo in which Wade discussed an offer he said would "take care" of guard Javonte Smart and his mother. Smart has been permitted to play in the postseason after meeting with LSU administrators. But Wade, on the advice of his attorney, is declining to discuss the matter with LSU officials until the FBI closes an investigation that has focused primarily on corruption allegations against shoe company representatives and agents, and has implicated several coaches.

A federal trial is scheduled for April 22, after the NCAA postseason has ended, so Benford could be the face of LSU's coaching staff for as long as the Tigers keep playing.

"All I tried to do when I was named interim was just concentrate on the kids. That's the main thing, the players — making sure they have a great experience," Benford said Tuesday evening. "All we can concentrate on is the moment we're in today, to be the best that we can be.

"That's made it easier for me because it's all about their experience."

Benford tends to downplay his figurehead role, which he describes as "a lot different" than when he was in charge at North Texas. At LSU, Benford said he consults assistants Greg Heiar and Bill Armstrong on most matters and often differs to them.

"I let those guys handle the bench a lot for substitutions," Benford said. "If we need to make adjustments, they make suggestions to me and I'll ask them.

"My mindset is we're doing it as a group," he added. "Coach Wade did a great job of delegating to us, so that's what we try to do."

Under Benford, LSU has gone 3-1, easily defeating Vanderbilt in the Tigers' regular-season finale, losing to Florida on a last-second shot in their SEC Tournament opener, and then winning first- and second-round games over Yale and Maryland, respectively, in the NCAA Tournament.

Along the way, Benford has consulted colleagues and his old coach.

"I've always been proud of him. He played on some good teams for us at Texas Tech," Myers said, adding that he told Benford: "'You've got a good team, got good players and you build on that. The best way to handle a team like that is be positive with them. Tell them how good they are."

The farther LSU goes, the more Benford could draw comparisons to Steve Fisher, who won a national title with Michigan as interim coach in 1989.

In this case, however, LSU's success could wind up tainted by the outcome of the FBI's corruption probe. Benford wants players to set aside such concerns for now and focus purely on seizing each opportunity to play with, and for, one another while this run lasts.

"Everybody has picked us to lose because of our situation and all the adversity these guys have gone through," Benford said. "I can tell you what, this is a close group. They respect one another. They work hard. They have given themselves to us coaches and they want to win."