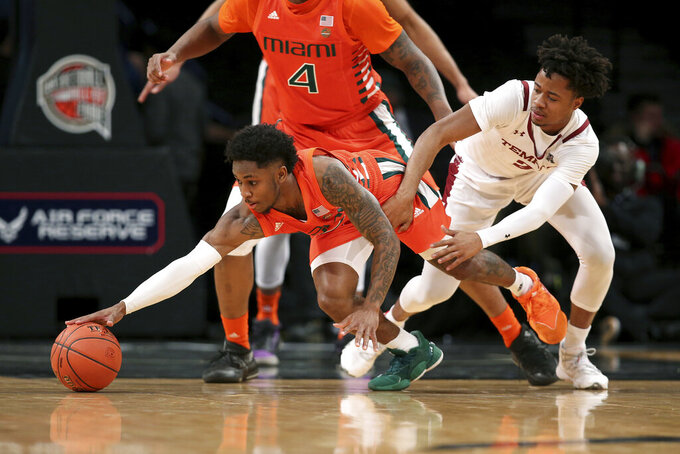 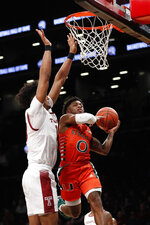 NEW YORK (AP) — This was not survive and advance.

This was just survive.

And when it was over, Miami coach Jim Larranaga could appreciate what he and his team went through.

“Just a heck of a college basketball game,” Larranaga said after Chris Lykes made two free throws in the final four seconds to lead Miami to a 78-77 win over Temple on Tuesday night in the third game of the inaugural Air Force Reserve Basketball Hall of Fame Invitational.

“DJ has been with us for four years. I can tell you from the day he arrived he’s one of smartest, hardest working, best shooters, great leader, great competition I’ve been around,” Larranaga said of Vasiljevic. “He is the consummate teammate.”

Whereas Miami could revel in a hard-fought win, Temple coach Aaron McKie was left to wonder what could have been.

The game was tight from the opening tip, as neither squad was able to create any separation. Miami’s biggest lead was nine, while Temple largest advantage was six.

Trailing 71-66, Temple cut the deficit to two on a Moore 3-pointer. On the ensuing possession, a McGusty layup allowed Miami to extend the lead to four. Only to have Temple rip the advantage away due to two made free throws by Rose, and 3-pointer by J.P. Moorman II. Miami regained the lead following back-to-back Miller layups, but a De'Vondre Perry 3 gave Temple 77-76 lead to set the stage for Lykes.

Following Lykes’ two made free throws, Temple had one last chance but Rose missed a desperation 3.

“We subbed,” Larranaga said. “(We) took Rodney Miller out and put Harlond Beverly, a freshman, in believing Chris would make the free throws, we’d be up one, and we’d have to get matched up with Quinton Rose. Harlond did that and did a great job of keeping him from his right hand. That allowed us to force a deep 3 (and) he missed it. Great job by both Chris making the free throws but also his teammate’s stop.”

Both Temple and Miami could benefit from what transpired at Barclays Center on Tuesday once conference play tips off as the AAC and ACC programs collaborated on what was essentially a 40-minute exhibition of possession-by-possession basketball.

Easy baskets were a rarity as the Owls and Hurricanes were cognizant of both limiting fast break opportunities and getting back on defense. Which is par for the course for Temple, which entered the game ranked 27th in the NCAA in scoring defense with 60.1 points allowed per game, 39th nationally in 3-point field-goal percentage defense, and fifth in nation with a .351 field goal-percentage defense.

Whereas Temple is strong across the board defensively, Miami is somewhat of a mixed bag. The Hurricanes had limited opponents to .328 shooting from 3, but allowed opponents to connect on .465 of their shots from the field.