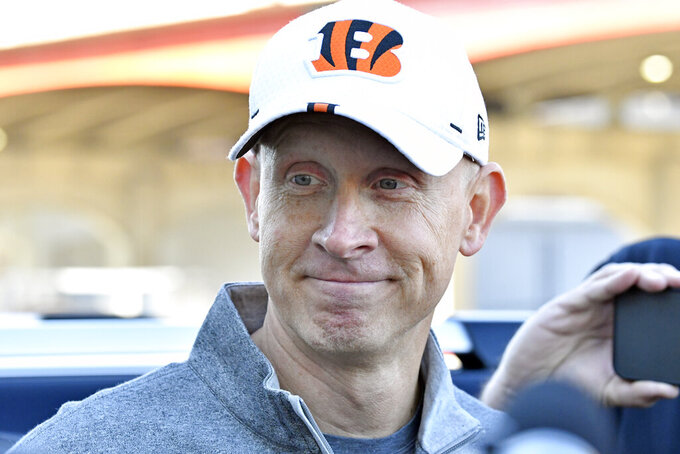 Louisville men's basketball coach Chris Mack speaks to reporters outside the team's practice facility in Louisville, Ky., Wednesday, Jan. 26, 2022. Louisville’s Board of Trustees and the school's Athletic Association have scheduled a joint meeting for Wednesday amid a report that coach Chris Mack will soon be out. (AP Photo/Timothy D. Easley)

Mack and the school agreed to part ways and assistant Mike Pegues has been named interim coach for the remainder of the Cardinals' season.

The moves were announced Wednesday following a special joint meeting of the school’s Board of Trustees and the University of Louisville Athletic Association board. Interim athletic director Josh Heird said that Mack will be paid $4.8 million between this fiscal year and the next three fiscal years.

Mack leaves after going 6-8 since returning Dec. 1 from a six-game suspension by the school for failing to follow university guidelines in his handling of an extortion attempt by fired Cardinals assistant coach Dino Gaudio last spring.

Pegues guided the Cardinals to a 5-1 start while Mack was sidelined and now will try to lift the team out of a slump that includes five losses in its last six games.

“Our Board of Trustees and ULAA board members agreed this was our best path forward,” Heird said after the nearly two-hour meeting, adding that both sides mutually agreed to the decision.

“Everybody in this room who has watched our men's basketball program and over the weekend realized this was the direction we were headed,” Heird said, referring to Saturday's home loss to Notre Dame.

Mack met with players on Wednesday morning and later lamented the fact they knew what was happening before he could tell them.

“You can’t do things the right way anymore,” Mack said. “You need approval and all that stuff. I wanted to be the first to tell them.”

He didn’t offer specifics on when he thought things began turning the wrong way for him, other than saying “it’s been building.” as he left the team’s training center just before the trustees and athletic board met And he insisted that he still wants what’s best for Louisville and his players, adding that will not change.

“I’m humble enough that if I’m not the right person, all good, man,” Mack said. “Just want the best for them. They’re great kids. I loved my time at Louisville. My kids love it here. And so, I harbor no bitterness. Life’s too short. I know in 2022 everybody wants to be a victim. Never live my life that way, at all.”

Louisville is 11-9 (5-4 Atlantic Coast Conference) but needing to win out in hopes of returning to the NCAA Tournament for the first time since Mack’s inaugural 2018-19 season.

Mack signed a seven-year contract in March 2018 that paid an annual base salary of $4 million with a $250,000 increase enacted last spring. Three years remained, but the deal also included a buyout clause in which he would owe the school $4.5 million if he resigned before April. He went 68-36 in three-plus seasons, 38-25 in the ACC.

Louisville will begin a search for Mack’s replacement despite vacancies in key leadership positions. President Neeli Bendapudi and athletic director Vince Tyra resigned just hours apart last month, and no announcements have been made about when they’ll be replaced.

Heird said he intends to hire the next coach.

“It's extremely important that the guys in the locker room and this community know who the leader is of this basketball program,” he added.

It's a program facing possible sanctions.

Louisville awaits the outcome from the Independent Accountability Resolution Process (IARP) over NCAA allegations against the program following the federal corruption investigation of college basketball. The IARP was created out of proposals from the commission led by former U.S. Secretary of State Condoleezza Rice in 2018 to reform college basketball.

The school was finishing up NCAA probation from a 2015 sex scandal at the time of those latest allegations and could face harsh punishment. The governing body tacked on additional allegations last fall and accused Mack of failing to maintain an atmosphere of compliance.

Mack was considered to be the solution when he left Xavier to take over for interim coach David Padgett, who replaced Hall of Famer Rick Pitino in the wake of the corruption scandal.

“I think Chris worked probably harder than anybody I’ve ever seen to just try to find the right levers to pull to motivate this group," Heird said. "For some reason, it just didn’t seem to resonate.