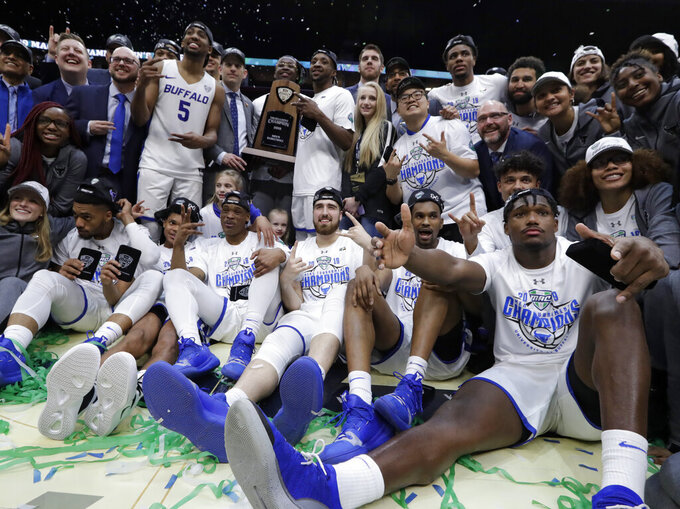 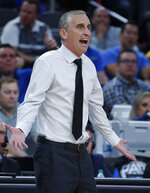 MINNEAPOLIS (AP) — Richard Pitino sat calmly in the middle of the room, his eager players flanking him and his restless children in front of him on the floor, as the teams with NCAA Tournament bids flashed on a big screen.

Next came Minnesota, his current team.

Pitino simply smiled, fully and immediately aware of the extra intrigue created by the selection committee with this East Region matchup of No. 7 and 10 seeds.

The madness of March has been built on all those low-major upsets and buzzer-beating swishes that bust up the office-pool brackets, but some of the must-see TV each year is arranged before the opening tip.

The Louisville-Minnesota game is one of those predetermined talkers, pitting Pitino and the Gophers against the storied program that fired his father, Rick Pitino, prior to the 2017-18 season in response to the federal investigation into a nationwide college basketball bribery and corruption case. Richard Pitino served two stints as an assistant with the Cardinals under his dad, who has been coaching a professional team in Greece this season .

"Has he talked about Louisville the last two years? Yeah, he has, not in the most positive light," Pitino said. "It's not going to be about me. I'm not going to be, 'Oh, it's revenge,' or anything like that. It's about our players. It's about this program."

The Gophers will go to the NCAA Tournament for a second time in six seasons under Pitino.

"We know he's been there a long time, his dad's been there, but we can't make it all about the Pitino family," senior shooting guard Dupree McBrayer said. "This is a team game."

The Cardinals and Gophers were sent to Des Moines, Iowa, where they'll face off on Thursday with a late morning tipoff. That was far from the only assignment made by the committee that carried a dimension beyond the matchups on the court, of course.

Buffalo will get a fresh look at its first opponent when Arizona State plays St. John's in one of the play-in games on Wednesday night in Dayton, Ohio. If Arizona State wins the right to face Buffalo on Friday afternoon in Tulsa, Oklahoma, well, Bulls coach Nate Oats sure won't be surprised. Sun Devils coach Bobby Hurley just so happened to be his boss, before Hurley left for Arizona State and Oats was promoted by Buffalo.

As the final quarter of the bracket, the West Region, was revealed, Oats had an inkling his Bulls, the No. 6 seed, would wind up next to the Sun Devils.

"You think it was a coincidence? Yeah, me neither. It's TV," said Oats, who was trading text messages with Hurley's brother, Danny, during the selection show.

After Hurley directed Buffalo's first NCAA Tournament berth in 2015, Oats has now steered the Bulls to three in four years.

"Coach Hurley gave me my shot. I pull for him," Oats said. "We talk a lot. Emotionally, it's not going to be fun. For his sake, I hope they get the win."

If UCF, the No. 9 seed in the East Region, can beat No. 8 VCU, coach Johnny Dawkins will be subject to the same type of mixed emotions. The second-round pairing for the Knights would probably be Duke, provided the No. 1 overall seed takes care of North Carolina Central or North Dakota State. Dawkins both played for and coached under Blue Devils maven Mike Krzyzewski.

The coaches are a major part of the story in March, but they'll always be on the bench. The players are the true stars of the show, and there are no greater individual standouts than Marquette's Markus Howard and Murray State's Ja Morant. Well, guess what? They're scheduled to play each other right away, too.

Marquette is the No. 5 seed in the West, facing No. 12 Murray State in Hartford, Connecticut, on Thursday afternoon. Nobody in the tournament has scored more this season than the 5-foot-11 Howard (sixth in the country with an average of 25.0 points per game) and the 6-foot-3 Morant (eighth with 24.6 points per game). The sophomore Morant, a dynamic dunker, also leads the nation with an average of 10.0 assists per game. The junior Howard hit the 45-point mark three times.

Let's go back to Minnesota for a moment, too. If the Gophers beat Louisville, there will likely be an even more familiar foe waiting for them in the next game: Michigan State. The No. 2 seed Spartans play No. 15 Bradley to start. That potential Michigan State-Minnesota matchup would be a big deal for the Big Ten even if not in the rest of the country.

Such an intraconference matchup on the first weekend is a rarity. In 2011, when the Big East sent a record 11 teams to the NCAA Tournament out of what was then a 16-team league, there were two all-Big East games in the second round: Cincinnati-Connecticut and Syracuse-Marquette.

According to David Worlock, the NCAA's director of media coordination and statistics, the committee tries to avoid such matchups if possible. Tournament principles state that teams who played only once during the season can meet as early as the second round, and this season the Spartans and Gophers only met once. If two teams played twice, they're allowed to meet as early as the regional semifinals. If they met three times, they couldn't match up until the regional finals.