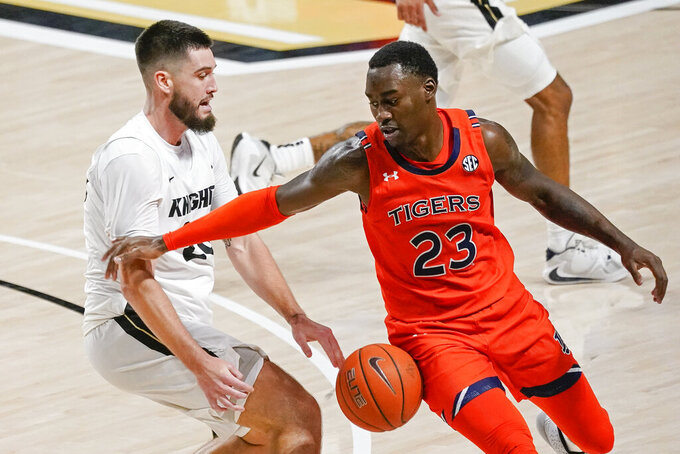 Central Florida forward Sean Mobley, left, loses control of the ball as he tries to get around Auburn forward Jaylin Williams (23) during the second half of an NCAA college basketball game, Monday, Nov. 30, 2020, in Orlando, Fla. (AP Photo/John Raoux)

ORLANDO, Fla. (AP) — Brandon Mahan scored all 12 of his points in the second half, including four of UCF's final six free throws, and the Knights held off Auburn 63-55 down the stretch to win a season-opener Monday night.

Mahan played four minutes in the first half but all of the second, making 4 of 8 shots, all four free throws and three steals, two defensive rebounds and an assist.

Mahan made his presence felt with a steal just over two minutes into the second half, leading to a Dre Fuller Jr. 3-pointer. In the final two minutes, he scored on a drive to the basket that pushed the lead to eight, deflected an inbound pass for a takeaway, stole another pass and hit four from the line.

Fuller and Tony Johnson Jr. carried the Knights through a low-scoring first half, combining for 14 of UCF's 30 points. Fuller ended the game with 13 and Darin Green Jr. added 10.

“Ah, well, that was ugly. Set the game of basketball back a few years,” Tigers coach Bruce Pearl said.