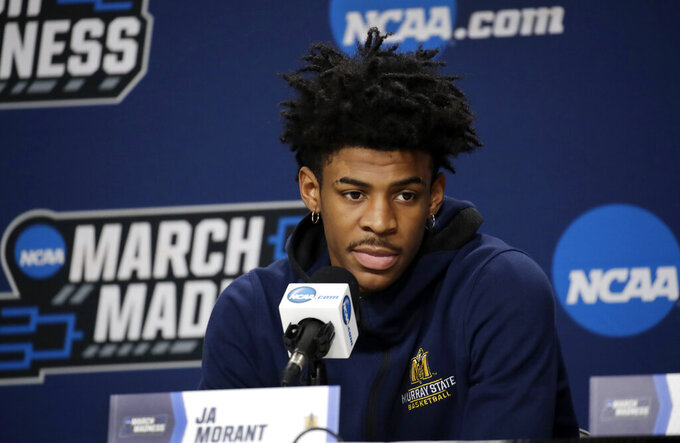 Murray State's Ja Morant listens to a question during a news conference at the men's college basketball NCAA Tournament, Friday, March 22, 2019, in Hartford, Conn. Murray State will play Florida State in the second round on Saturday. (AP Photo/Elise Amendola)

HARTFORD, Conn. (AP) — Murray State coaches knew they had something special with Ja Morant as a freshman. The athleticism, ball handling and court vision were exceptionally rare.

In a one-and-done world of college basketball, the biggest stars often arrive on campus ready dominate — like Morant's former youth basketball teammate Zion Williamson of Duke. Morant blossomed in college, going from unheralded recruit to promising mid-major freshman to the talk of the NCAA Tournament. The point guard from South Carolina put up a triple-double in the Racers' first-round victory against Marquette that has pushed his stardom to a new level.

"There were plenty of signs for what was in store last year as a freshman, but it's a great credit to him and the work he put in in the offseason," Murray State coach Matt McMahon said Friday as the 12th seeded Racers prepared to face fourth-seeded Florida State on Saturday in the West Region.

Less than 24 hours after Morant put on a show in Hartford, the sophomore said his Instagram followers had increased by more than 100,000. His game against Marquette had NBA stars Steph Curry and Dwyane Wade marveling at his talents.

Morant was already a lock to be an NBA lottery pick. Now he is a celebrity. But it was last summer, when nobody was paying attention on social media that Morant was laying the foundation for a breakout season and one of the most memorable NCAA Tournament performances in in recent history.

Morant worked tirelessly on his outside shot, grinded in the weight room — putting 20 pounds on his lanky frame — and became more studious in the film room. After averaging 12.7 points and 6.2 assists as a freshman, while shooting 46 percent from the floor and 31 from 3-point range, Morant jumped to 24.4 points, 10.2 assists, 50.4 percent from the field and 34 percent from 3.

Murray State assistant Casey Long said shooting was the main point of emphasis for Morant by the coaching staff. He was a gifted passer and explosive athlete, but the Racers needed him to become more of a scoring threat from outside.

Long said Morant would pick up on things so quickly that assistant coach Shane Nichols rapidly advanced to NBA level drills, which not only test accuracy but stamina.

"We worked on that a ton. On how to shoot off the bounce. Shooting catch-and-shoot shots. Shooting off screens. Shooting off pin downs. All these type of actions that he will eventually see in the season that he would have to be effective on," Long said.

Morant averaged 34 minutes per game as a freshman and the Murray State coaches knew that number would increase. Morant said arrived at Murray State weighing 150 pounds.

"We pushed him in the weight room. Squatting more. Benching more. Really locked down his nutrition to help recover," Murray State strength and conditioning coach Zach Whitman said. "I used to make PBJs for him all the time."

Helping Morant get better at playing through contact has also been part of teammate Shaq Buchanan's job. Morant and Buchanan, the Ohio Valley Conference defensive player of the year, both arrived at Murray State last year and became partners in the gym and weight room.

"You see him in a game doing all those wild finishes, but that comes from us pressuring him, and him being able to finish up through contact," said Buchanan, who is 6-3 and 190.

Morant attended NBA star Chris Paul's camp for elite guards last summer, where the work in the class room and the work on the court came to together.

"We did a lot of film study of him coming up off screen. And we also did some drills coming off ball screens. I felt like that just helped me know how to attack a ball screen, whether it's (isolation) or the different coverages of the ball screen," Morant said.

It has all come together for Morant, who is on the verge of becoming the first Division I player in the NCAA history to average double-digit assists and at least 20 points in a season — and maybe one of the most famous athletes in the country.