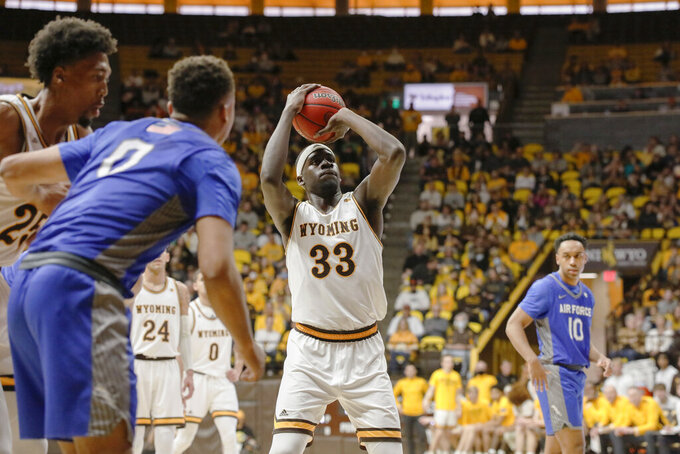 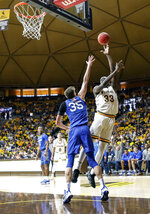 Maldonado also had eight assists and seven rebounds, and Ike had 12 rebounds for the Cowboys (22-4, 11-2 Mountain West Conference).

The last time the two teams played, on Jan. 28, it was in Colorado Springs, Colorado, where Maldonado grew up. He scored 31 points and made the game-winning layup as time expired in Wyoming’s 63-61 win.

“Throughout the history I’ve played pretty well against them, but today was about bouncing back from New Mexico because I didn’t do very well,” said Maldonado, who had nine points and eight turnovers during the Cowboys’ loss Tuesday.

Wyoming led by as many as 13 points in the first half but ended up with a 30-26 lead at the half after being held scoreless over the final 5 minutes. The Falcons closed the half on an 8-0 run capped with a 3-pointer by Moerman.

In the second half, Ike picked up two fouls in an 11-second span, and Maldonado and Air Force’s Joseph Octave received technical fouls.

“We were just taking our time in the paint and reading the defense to see how they were going to play us,” Ike said after finishing 11 for 11 from the field.

A.J. Walker (15 points) and Jake Heidbreder (11 points) also scored in double figures for the Falcons, who made nine 3s but were unable to overcome Maldonado and Ike's dominant presence.

Wyoming, which cracked the AP Top 25 poll last week for the first time in seven years, will likely slip out after losing 75-66 to New Mexico on Tuesday.

With the game in the balance, Maldonado made a steal and completed an acrobatic three-point play on the other end to give Wyoming some breathing room and get the crowd of 8,312 — the largest at the Arena-Auditorium in seven years — engaged down the stretch. Moments later, Ike drew Moerman’s fifth foul and the Cowboys surged to a 12-point lead.

Wyoming: The Cowboys moved back into a tie with Boise State for first place in the Mountain West entering Saturday night’s games.

Air Force: The Falcons have now lost seven consecutive games and are 6-28 in Mountain West play in Joe Scott’s second stint as head coach. His 2003-04 Falcons won the conference and appeared in the NCAA Tournament.

Wyoming: At Colorado State on Wednesday; the Cowboys won the first matchup in overtime.