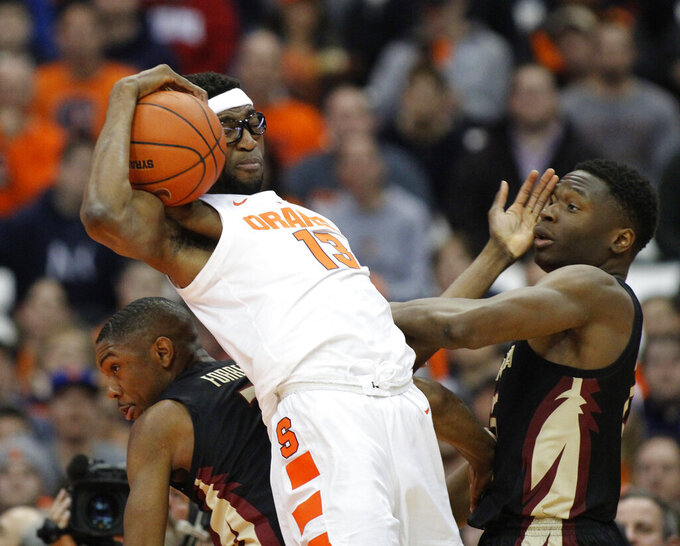 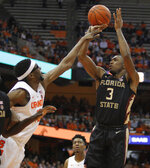 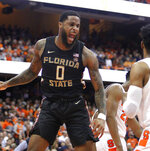 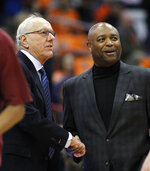 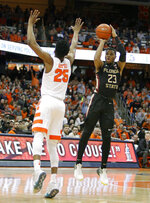 SYRACUSE, N.Y. (AP) — Florida State played with focus and purpose from the opening tipoff and Syracuse didn't. In the end, that proved more than enough.

"This was a very important game for us. I thought our guys were connected, realizing that if we didn't play exceptionally well with a lot of energy we're not going to win here," Florida State coach Leonard Hamilton said. "We did very well and were able to finish the game strong."

Florida State (17-5, 5-4 Atlantic Coast Conference) won its fourth straight after starting conference play with four losses in five games. Syracuse (16-7, 7-3 ACC) entered the game 2-3 against ranked teams, having beaten two on the road — Ohio State in late November and Duke three weeks ago. But the Orange fell 22 points behind early against the Seminoles, rallied to within a point in the second half and then fizzled at the end, worn out from the press they used to rally.

"When you have a team only playing six guys pressing, you're definitely in a good spot," Mann said. "Our coaches kept reminding us — keep putting pressure on and you'll wear them down, and it eventually happened."

FSU outscored Syracuse 38-18 in the paint, its defense repeatedly thwarting attempted drives to the basket, and hit 11 of 22 from beyond the arc in a solid display against Syracuse's vaunted 2-3 zone.

Tyus Battle led Syracuse with 23 points and Elijah Hughes had 17 as only four players scored. Senior point guard Frank Howard and center Paschal Chukwu failed to score in 32 minutes on the floor. Unable to penetrate the lane, Howard took only two shots, missed both from long range, and also missed all three of his free throws. The Orange missed nine from the line, a persistent weak spot.

"I feel like they definitely came out with a lot of energy," said Syracuse forward Oshae Brissett, who had 16 points and 12 rebounds. "They were ready to go, for sure. Guys came off the bench and were ready as well. They really didn't let up throughout the whole game. They came ready to punch us."

Kabengele has scored in double figures in 15 of the team's 22 games, all as a reserve. M.J. Walker and Phil Cofer each scored 11 points as 10 players scored for the Seminoles.

"They're a great team. They know how to attack. They never stop. They never slow down," Brissett said. "They've got guys coming off the bench that know what they've got to do — keep the energy up. It's tough to get a team like that, especially if you start down like we did."

Trailing 39-31 at halftime after a furious rally, Syracuse started the second with a 7-3 spurt, pulling within 42-38 on Battle's steal and fast-break layup.

The Orange drew within a point on Brissett's putback with 13:34 to go, and the game remained tight for the next three minutes before the Seminoles reeled off 12 straight points. Kabengele's tip, a dunk by Mann and a pair of 3-pointers by Kabengele boosted the Florida State lead to 65-52 with under seven minutes left and the Orange couldn't respond.

"We made the best effort we made all year long to get back in the game," Syracuse coach Jim Boeheim said. "But they're good, they're strong and physical. I thought we had to give too much to get back. We ran out of gas a little bit at the end."

In winning its previous three ACC games, the Seminoles shot 45.7 percent from the field, 44.8 percent from the 3-point line, and the hot shooting continued against the Orange. The Seminoles were 5 of 6 from long range in the first seven minutes, using the barrage to key a 13-2 spurt and gain a 19-9 lead. Kabengele, Mann and Walker drilled 3-pointers in a span of just over a minute against the reeling Orange defense.

After Battle hit a free throw for the Orange, Florida State went on another tear, outscoring the Orange 14-2, and Mann's three-point play gave the Seminoles a 36-14 lead with 6:05 to go in the half.

The Orange responded with a stirring rally, forcing five turnovers in the final five minutes as they closed the half with a 17-3 surge to make it a game again despite allowing eight 3s.

Florida State: Three of the Seminoles' nine remaining games are against teams in the AP Top 25 that sit above them in the ACC. They play Louisville and Virginia Tech at home and North Carolina on the road. If they continue their hot shooting, they have the talent to make some noise.

Syracuse: Three players — Battle, Brissett and Hughes — accounted for 56 points against the Seminoles. Howard has to regain his touch to add more balance to the offense.