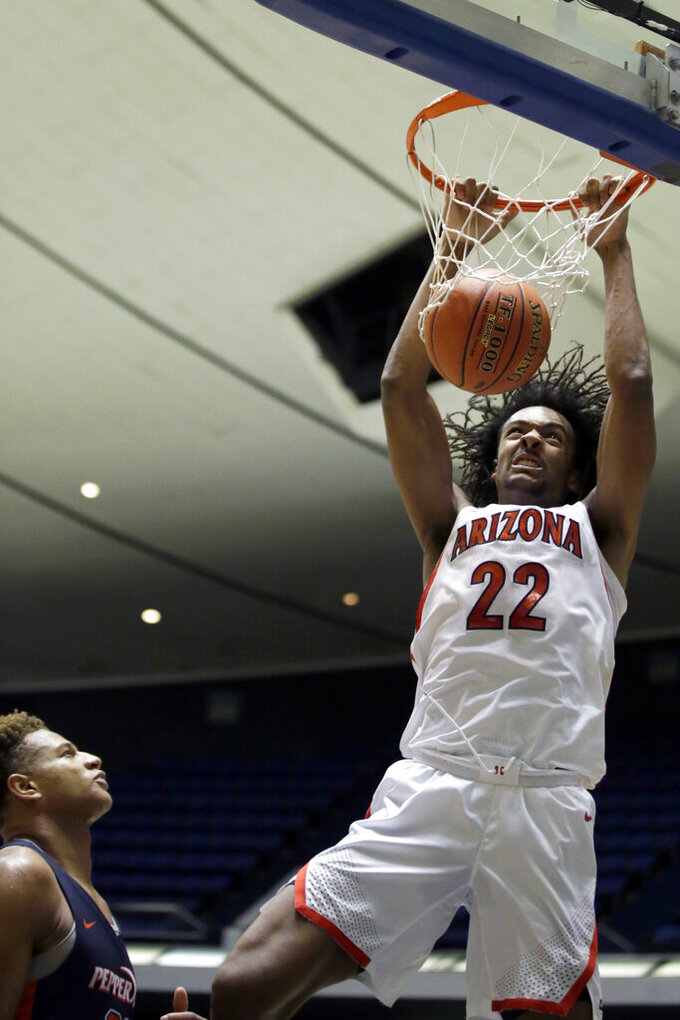 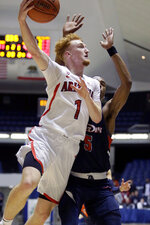 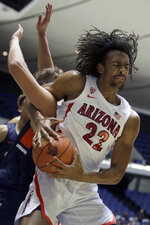 ANAHEIM, Calif. (AP) — There aren’t many freshmen who have the confidence this early in the season to drive the length of the floor for the game-winning shot. Fortunately for Arizona, it has one in Nico Mannion.

Mannion went coast to coast and made a running layup that banked in high off the glass with 4 seconds remaining to lift the 14th-ranked Wildcats to a 93-91 victory over Pepperdine on Thursday night at the Wooden Legacy.

“Before I pushed it I was looking up the floor to Josh (Green) or Dylan (Smith) on the wing,” said Mannion, who finished with 16 points and 11 rebounds. “Once I got down there I was thinking it was going to be a shot or a quick kick out. I kind of floated it up and it went in.”

Colbey Ross’ off-balance jumper tied it at 91 before Mannion drove the floor for the winning basket. Ross’ heave from halfcourt went off the glass as time expired.

One person who wasn’t surprised by Mannion’s aggressiveness was his coach, Sean Miller, who saw the 6-foot-3 point guard make those types of plays when he was recruiting him.

“He’s made a lot of game-winners in his day. That’s who he is as a player,” Miller said. “He’s poised for a freshman. That was an old-school hook off the glass.”

The game featured 24 ties and 13 lead changes as both teams shot 50 percent or better from the floor and combined for 24 3-pointers.

Pepperdine coach Lorenzo Romar, an assistant on Miller’s staff at Arizona after he was fired at Washington, said the Waves gambled by taking a tying shot with 7 seconds left and lost.

“What we didn’t want to happen is take the last shot and if we didn’t make it the game was over,” Romar said. “Nico hit a big-time shot that was pretty well defended.”

The Wildcats had won their first six games by an average of 30.3 points, the largest margin in the nation, but this was their first time away from the McKale Center.

The game was tied 42-all at halftime before Arizona jumped out to a 69-57 lead midway through the second half with a 13-2 run keyed by three consecutive 3-pointers from Green.

Pepperdine (3-4) got back into the game with nine straight points, including six by Chavez. The Waves tied it at 74 on Edwards’ fast-break dunk off a steal with 6:47 remaining.

“I thought we would be able to hold steady on that gap after our run. I didn’t think they would punch it back to tie it,” Miller said.

It was the first time since 2009-10 that Pepperdine has had three players score at least 20 points in a game. ... All of the Waves’ points came from their starters. ... Arizona made 60.7% of its shots from the floor and was 18 of 25 in the second half. It did not miss consecutive shots over the final 24 minutes.

Pepperdine: Three of the Waves’ four losses are to Pac-12 teams. They have an eight-game losing streak to teams from the conference, with their last victory coming against Washington State in 2012.

Arizona: The Wildcats came into the game making 72.5% of their foul shots but went 14 of 24, one reason why Pepperdine was able to stay in the game.

Pepperdine: The Waves will take on Central Florida on Friday in the consolation bracket.

Arizona: The Wildcats will face Penn in the winners’ bracket.