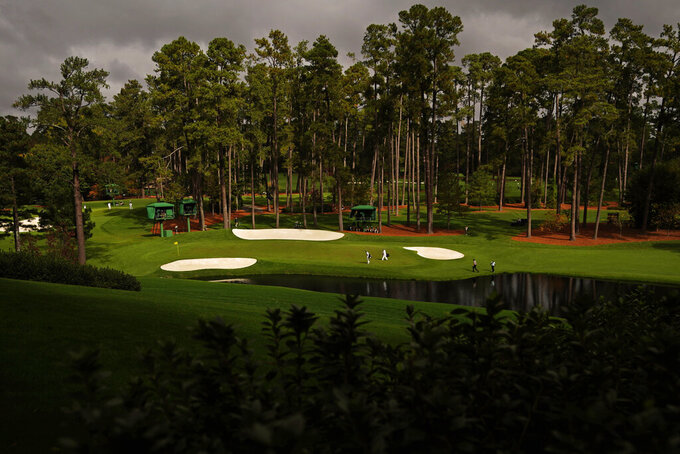 Jimmy Walker and C.T. Pan, of Taipei, walk to the 16th green with their caddies during a practice round for the Masters golf tournament Tuesday, Nov. 10, 2020, in Augusta, Ga. (AP Photo/Matt Slocum)

Nobody knew exactly what to say in Oklahoma City around 7:10 p.m. local time on March 11, 2020. That was an issue for Mario Nanni, whose job as the Oklahoma City Thunder public-address announcer is to tell fans exactly what’s happening.

He had just introduced the starting lineups. The Thunder and Utah Jazz were about to play. And then someone ran onto the court from the back of the arena with one mandate: Make sure that game doesn’t start. The referees were hastily gathered, then coaches were brought together to hear the news: Jazz center Rudy Gobert had tested positive, and NBA Commissioner Adam Silver decided to cancel the game.

Nanni took a deep breath. “Fans, due to unforeseen circumstances, the game tonight has been postponed,” he began, as those inside the arena somehow made their reactions of shock audible.

With that, everything in the world of sports officially changed.

“We were in uncharted territory,” Nanni said.

In many respects, we still are. The NBA was the first major league to stop play. A day later, so did the NHL, Major League Baseball and Major League Soccer. College basketball did as well, and the trickle-down continued. High school tournaments. AAU seasons. Spring sports. Summer camps. Fall sports in high schools and colleges. The pro leagues and most college ones have come back; some at the high school and youth levels haven’t resumed yet. Careers ended, without warning, without proper farewells.

Sports was bracing for change on March 11, 2020. Locker rooms had been closed to outsiders, hand sanitizer was everywhere, and the NBA was among the leagues strongly considering playing games in empty arenas.

The shutdown didn’t seem as likely. That is, until it happened.

“We had discussed as a crew at lunch that day the possibility of this thing spreading,” said NBA referee Pat Fraher, who was on the officiating team for that Oklahoma City-Utah game and was the one who delivered the word to the coaches. “But we didn’t really know what we were a part of that night. We had no idea the true impact of what happened.”

The global fight against COVID-19 didn’t begin that night in Oklahoma City, of course. It started at least two months earlier in China, where the virus originated, but that was the day where the global health crisis was declared — and within hours, a global sports crisis was happening as well.

Things are, obviously, improving. Vaccines are getting into arms, health workers have devised plans to keep everyone as safe as can be, and more and more games are getting played. But a half-million Americans have died, 2.5 million around the world have died, more than 100 million globally have been infected.

Those are the stats that matter most from the past year.

“We see some light at the end of the tunnel, with the COVID-19 vaccine being accessible on a widespread basis over the coming weeks and months,” PGA Tour Commissioner Jay Monahan said.

Sports are games, and games are charted with numbers, and the numbers from the past year are incalculable. Billions of dollars were lost by the shutdown of sports; how much, we’ll never know for certain. Same goes with the jobs lost; thousands, but nobody knows exactitudes. And how many games were never played? Globally, at all levels, that number hits the millions with ease.

For months, every game clock was stuck at 0:00.

“It hit everybody in the face and COVID showed how it disproportionately affects so many others,” San Antonio Spurs coach Gregg Popovich said. “And it took something like that to make everybody step up and say, ‘Whoa,’ and see what was going on. And like I said, in many, many aspects of our lives, that made that possible.”

And now, the comeback story is already being told. The NFL made it through a season without any games being canceled and even had some fans at the Super Bowl. Small numbers of fans are welcome at golf and tennis events again. Some NBA and NHL teams have a few people in the seats. March Madness is here. Baseball is looming. A delayed Tokyo Olympics seem like they’ll happen, albeit without international fans welcome to attend.

Things are not normal and may not be again for some time. The definition of normal has surely changed as well. But the games came back, providing what sports always does — a break from reality, a diversion from problems, an escape from the real world.

That’s been needed now, perhaps more than ever.

“Anything you go through in life, it either makes you or breaks you,” Gobert said. “If you can handle it and grow from it, that’s what life’s about.”

The last year proved that sports are about that as well.