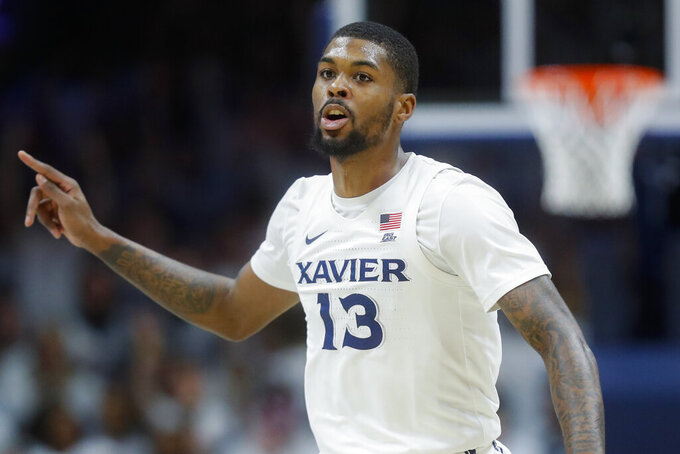 Xavier's Naji Marshall reacts after scoring during the first half of an NCAA college basketball game against Xavier, Saturday, Dec. 7, 2019, in Cincinnati. (AP Photo/John Minchillo)

CINCINNATI (AP) — Naji Marshall opened Xavier's scoring with a no-hesitation 3. He hit a floater and a fade-away jumper, all in the opening minutes.

From every spot on the floor, he dominated the city's annual crosstown rivalry.

The junior forward tied his career high with 31 points, and Xavier regained the city's bragging rights on its home court Saturday, beating Cincinnati 73-66 for its ninth win in the last 13 games of the crosstown rivalry.

“He was ready for it, man,” Xavier coach Travis Steele said. “He just kind of had that flow tonight. Overall he was the best player on the floor. I don't think it was even close.”

The annual rivalry game is a chance for players to write their legacy. Marshall's 31 points, eight rebounds and career-high five steals will go down among the most notable performances.

“It was just an unbelievable feeling,” said Marshall, who made 12 of his 22 shots.

Marshall had the biggest plays on both ends of the floor during a run that pushed Xavier's lead to 16 in the second half. The Musketeers (9-1) were never seriously threatened the rest of the way, leading by no fewer than seven points.

“Marshall really took over the game,” first-year Cincinnati coach John Brannen said. “He did that the majority of the game, not just the first half. It really was an unbelievable game.”

Cincinnati (6-3) beat the Musketeers 62-47 at home last season under Mick Cronin. The Bearcats haven't gotten back-to-back wins in the series since 1994-95.

Tyrique Jones added 10 points and nine rebounds in only 23 minutes for Xavier after being limited by fouls in the first half. Keith Williams scored 15 for Cincinnati.

Marshall made the difference on both ends of the floor. He also guarded Cincinnati's Jarron Cumberland, the American Athletic's player of the year who had a sore hip and wasn't much of a factor. Cumberland went 4 of 14 and finished with 11 points and four turnovers.

“I can't speak for another man's pain, but I know he was hurting and he gutted it out,” Brannen said. “If he wants to be out there, we're going to ride him.”

Marshall had 17 points in the first half, when Xavier led by as many as eight points. Cumberland managed only four points with three turnovers in 15 minutes.

Marshall led a 15-4 run in the second half that put Xavier ahead 51-35. Marshall had a steal and dunk, a 3-pointer, another steal and a reverse layup during the spurt.

“Give him the ball and let him go to work,” said point guard Quentin Goodin, who had eight assists. “We were playing off Naj. He did a great job creating for others and himself, and he was also playing great defense.”

Cincinnati: Cumberland has been limited this season by ankle and hip injuries and a one-game benching by Brannen. He played only 11 minutes during an 82-73 win over Vermont on Tuesday, when he hurt the hip. He was tentative Saturday, especially on defense.

Xavier: The Musketeers overcame first-half foul troubles and went on the decisive run in the second half. Jones got his second foul only 4:20 into the game and went to the bench for the rest of the half, costing Xavier its best front-line player. Paul Scruggs also got his second foul midway through the first half. Scruggs finished with a season-low seven points.

The Musketeers have won their last eight against Cincinnati at the Cintas Center, where they're 8-1 all-time against the Bearcats. The home team has won nine of the last 11 in the series.

Cincinnati leads the series 51-36. The schools separated by only a couple of miles first met in the 1927-28 season. They've played annually since the 1945-46 season.

Cincinnati lost despite a 41-36 edge on the boards. The Bearcats made 12 of 19 free throws while the Musketeers were 11 of 15 from the line.

Williams and Jones each got a technical foul for exchanging words with 13 seconds left in the game.