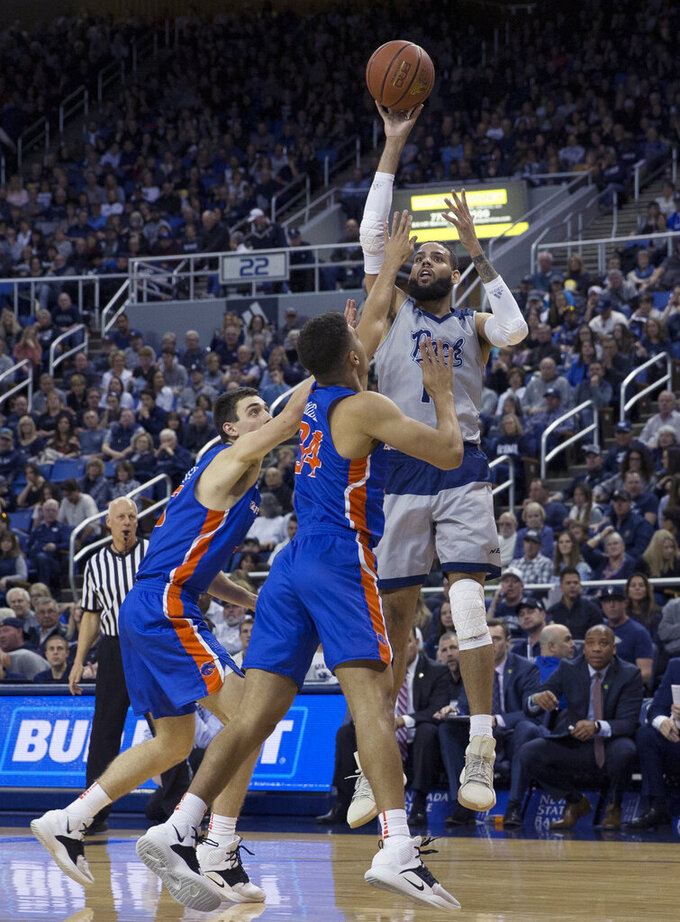 RENO, Nev. (AP) — In an effort to attack the basket more, Nevada guard Caleb Martin recently set a personal goal — get a minimum of 30 touches in the paint each game.

Martin first tried it this week at UNLV and came up three short. On Saturday, he topped the mark with 32, and led all scorers with 30 points as the No. 8 Wolf Pack beat Boise State 93-73.

"It's really helped me out a lot because I'm kind of working my way inside out. It's helped me not rely on the 3 as much, and whenever I start attacking guys, they give me a little more space and that's when I have the opportunity to shoot the three ball comfortably," he said.

Nevada struggled the previous time it played the Broncos, winning 72-71 on Cody Martin's 3-pointer in the final seconds at Boise on Jan. 15.

Nevada never trailed after the first minute in the rematch.

The Wolf Pack shot 55.6 percent as a team and 46.4 percent beyond the arc. Boise State led the conference in 3-point defense coming into the game (27.5 percent).

"I think our team has kind of figured out who they are offensively," Nevada coach Eric Musselman said. "They're really comfortable in their roles right now."

Musselman said Nevada is coming off its best three-game stretch of the season and is "playing at a clip like we did last year" when the team made a Sweet 16 run in the NCAA Tournament.

The Wolf Pack broke away shortly before halftime, going on a 9-2 run for a 41-30 lead at the break. Nevada shot even better in the second half, making 20 of 35 shots.

"They're No. 8 in the country for a reason," Alston said. "They're a talented team. They had all the answers for us. But I'm just proud of our guys and how we kept fighting the whole game until the last minute."

Boise State: The Broncos were seeking to finish what they started in their near-miss vs. Nevada last month. Half of their conference losses have come against the Wolf Pack, the Mountain West's top team.

Nevada: Since scoring 20 points in the first half against Air Force on Jan. 19 — its lowest output for a first half since Musselman arrived at Nevada in 2015 — the Wolf Pack has averaged 47 points in its last seven halves.

TAKING CARE OF THE BALL

The Wolf Pack outscored Boise State 17-2 on points off turnovers. Nevada had 22 assists and only four turnovers.