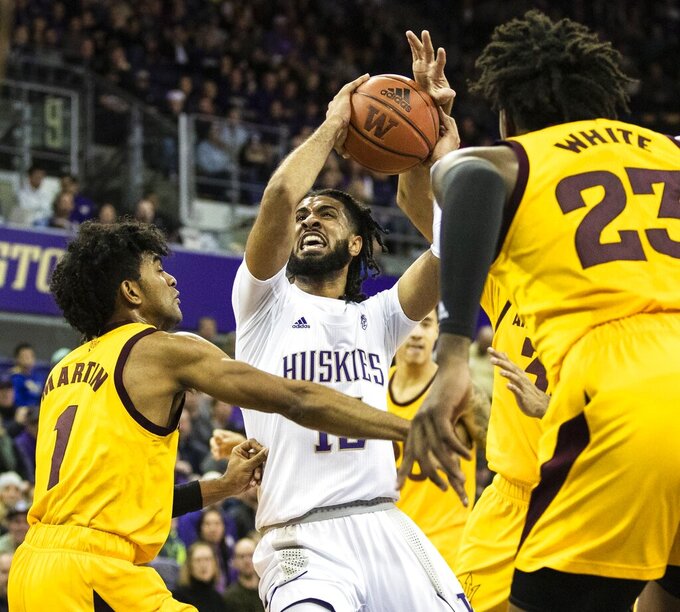 Washington guard Marcus Tsohonis (15) goes in for a shot and is blocked by Arizona State players, including Remy Martin (1), during an NCAA college basketball game Saturday, Feb. 1, 2020, in Seattle. (Amanda Snyder/The Seattle Times via AP)

SEATTLE (AP) — Remy Martin scored 19 points to lead five Arizona State players in double figures, and the Sun Devils held off Washington in the closing minutes for a 87-83 win on Saturday night.

The Sun Devils (13-8, 4-4 Pac-12) stayed in the middle of the conference race by rebounding from its last-second loss at Washington State earlier in the week. Martin led the Sun Devils on a night most of the scoring seemed to come from the free throw line.

The teams combined for 49 fouls and shot a combined 68 free throws. Arizona State was 27 of 33 at the free-throw line, including 21 of 25 in the second half.

Washington (12-11, 2-8) lost its fifth straight in a season that has been defined by close losses. Marcus Tsohonis led the Huskies with 19 points, while Hameir Wright and Isaiah Stewart both added 14, but it was another disappointing loss in a season that started with high expectations.

Washington pulled within 87-83 after Wright's third 3-pointer with 16 seconds left. Arizona State turned the ball over, but the Sun Devils recovered quickly on defense and Washington failed to get a good look in the closing seconds.

This one was decided by Arizona State's run midway through the second half.

Washington pulled within 41-38 after Wright knocked down three free throws, but the Sun Devils scored nine of the next 11 points and took their largest lead at 50-40 on Edwards' 3-pointer in transition with nearly 14 minutes remaining.

White's two free throws about 2 minutes later pushed the lead to 11 and the lead reached 13 on Verge's driving layup with 8:59 left.

Washington pulled within six on Carter's highlight dunk with 5:39 left but Arizona State withstood the Huskies run and pushed the lead to 79-69 on Khalid Thomas' 3-pointer as the shot clock expired.

Washington: The Huskies made a season-high 14 3-pointers in their loss to Arizona, but relied on shooting from behind the arc too much against the Sun Devils. Washington was 3 of 15 in the first half and 9 of 31 for the game.

Washington went with its two freshmen in the backcourt with Tsohonis getting his first start and RaeQuan Battle his third.

Arizona State also altered its starting lineup with Mickey Mitchell getting his first start since the 2017-18 season. Mitchell was limited to six games last year due to a back injury and had played in 12 games this year.

Mitchell didn't score in 19 minutes and fouled out.