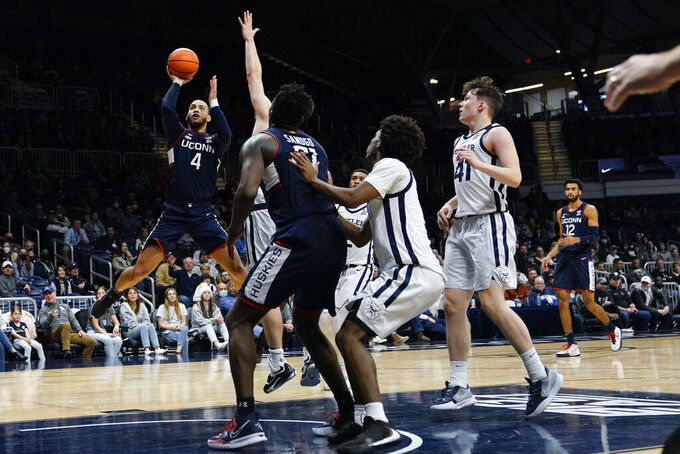 Connecticut guard Tyrese Martin (4) shoots over the defense of Butler in the second half of an NCAA college basketball game in Indianapolis, Thursday, Jan. 20, 2022. (AP Photo/AJ Mast)

Martin scored 25 of his career-high 27 points in the second half, and No. 25 UConn beat Butler for the second time this week, 75-56 on Thursday night.

“Tyrese's performance in the second half was fantastic,” Hurley said. “We've been waiting for him to break out since the Providence game (Dec. 18). He wanted the ball and was very demanding."

Adama Sanogo scored 15 points and Isaiah Whaley had 11 points and 10 rebounds for the Huskies (13-4, 4-2 Big East), who trailed by four points at halftime but took control in the second half.

Two nights earlier, UConn beat Butler 76-59 at home in a game that was rescheduled from Jan. 1 because of COVID-19. Martin scored just three points in Tuesday’s game.

The Bulldogs held the Huskies to 29% shooting to take a 28-24 halftime lead, but UConn responded by shooting 67% in the second half. Butler made 39% of its shots in the opening half and finished at 38%.

“I didn't go in right away and go after them,” Hurley said of his halftime talk. “I went to my little locker and stewed for a bit. ... If you aspire to compete in this conference, you can't show up and play a half like that. I think our depth and maturity as a team wore them down."

Trailing 30-24, the Huskies reeled off 11 unanswered points to grab a 35-30 lead. The Bulldogs went more than four minutes without scoring.

“Credit Butler that first half, they met the physical challenge of playing against a team like us,” Hurley said. “They took it to us in the first half defensively and on the backboard.”

“I don't think that game was what the score said it was,” Butler guard Aaron Thompson said. “We were in the game the whole way."

R.J. Cole, the Huskies’ leading scorer entering the game with an average of 16.4 points, was scoreless in the first half, missing all five shots. Cole finished with four points. He scored 17 points in Tuesday night's win.

“I would have been happy to win at the buzzer,” Hurley said. “It’s hard to win in this league. It's hard to play a team twice in three days, especially a team that is well-coached and has good young players.”

Butler coach LaVall Jordan said UConn made some huge shots in the second half.

“It was a physical game,” Jordan said. “Our guys battled but there are things we have to get better at. We didn't start the second half well. We have to keep our resolve and keep fighting."

UConn: After a poor shooting first half, the Huskies regrouped and caught fire. UConn finished with a 13-10 edge in second-chance points.

Butler: The Bulldogs were hurt by UConn’s 39-25 rebounding edge. Butler has lost three in a row and five of six.

UConn has a chance to remain in the AP Top 25 with the two victories over Butler.

Butler: At No. 21 Providence on Sunday.