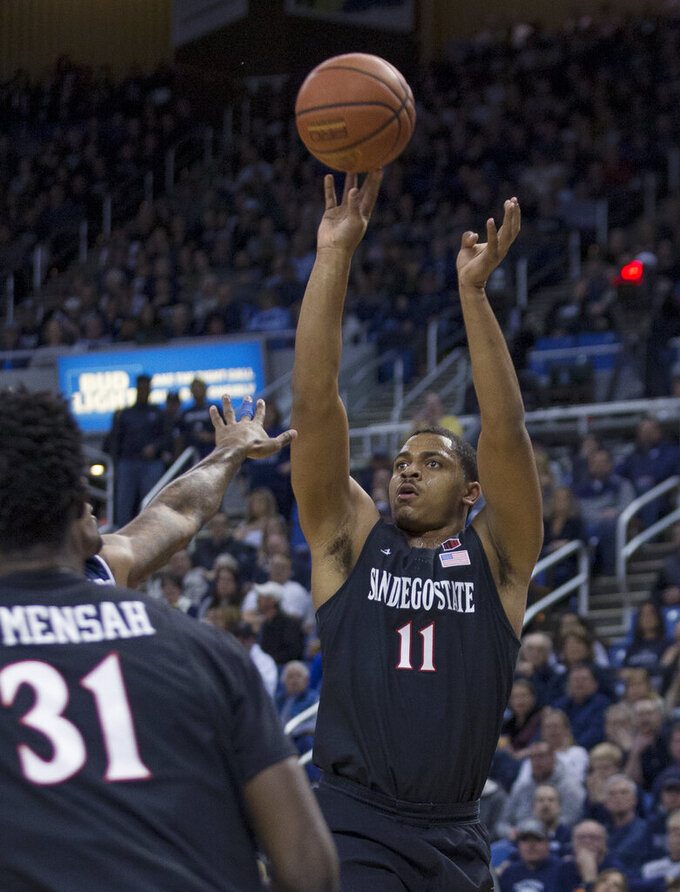 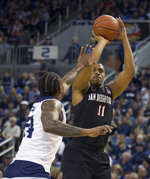 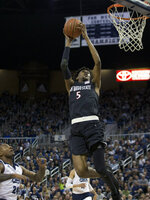 Caleb Martin scored 25 points and twin brother Cody added 14 to lead No. 17 Nevada to an 81-53 rout of San Diego State on Saturday night that clinched a share of the Mountain West title with Utah State.

"It means everything to share a moment with my Mom in town, people in town, playing with my brother one last time," Caleb Martin said. "We couldn't have asked for a better ending to the regular season and the seniors to go out with a bang here — winning like that against a team that beat us."

"I told them I loved them and thanked them for taking me and my family on this ride," Nevada coach Eric Musselman said of his seniors. "Now with guys that have been with us for four years, it's just a lot different of an experience than coaching at the NBA level. I don't think after my last game with the (Sacramento) Kings I was hugging everybody, crying and telling them I loved them. I don't think that really happened with Metta World Peace, K-Mart and those guys."

San Diego State had as many personal fouls as rebounds (25) — with one offensive rebound.

Nevada grabbed 42 boards and beat the Aztecs 26-12 in the paint. Nevada made 20 free throws to San Diego State's seven.

"You want to peak at the right time and I think that's what we are doing," Caroline said. "We are trending upwards, especially at tournament time."

The Wolf Pack jumped out to a 16-5 lead in the first five minutes in front of 11,243, but San Diego State answered with a 10-0 run in the final two minutes of the first half and entered the break trailing 42-37.

Nevada never trailed in the game and dominated the second half, outscoring San Diego State 39-16.

"Those seniors are relentless, especially the Martin twins and Caroline," Hemsley said. "I have a lot of respect for them and I think they have a lot of respect for me, too. It's a great atmosphere. I wanted to cry just knowing it was my last night playing here. It's something you're going to miss, playing in front of fans like that, who know you're name and are going to talk trash to you."

SDSU: The Aztecs finished the season tied with UNLV for fourth place in the Mountain West and will enter the tournament as the fourth seed.

Nevada: The Wolf Pack got revenge for its 65-57 loss at San Diego State on Feb. 20, and broke its three-game losing streak against the Aztecs.

Nevada finished the season 15-0 at Lawlor Events Center, and grabbed its 18th straight home victory, which tied a school record. Nevada's announced attendance of 11,243 pushed its season attendance to 163,169 — a program record.

The Wolf Pack's three losses this season came on the road against New Mexico, San Diego State and Utah State. Nevada beat each of those teams at home by a combined 244-164.

SDSU: Plays Thursday against UNLV in the Mountain West Tournament in Las Vegas.

Nevada: Plays Thursday against the winner of the No. 8 vs. No. 9 play-in game in the Mountain West Tournament. Nevada enters next week's conference tournament as the No. 1 seed because it owns a tiebreaker with Utah State: record against third-place Fresno State. "Now it's free game," Caleb Martin said about the upcoming conference tournament. "(We) ain't going to worry about no rankings anymore. Everybody is on the same level now. That's how I like it."