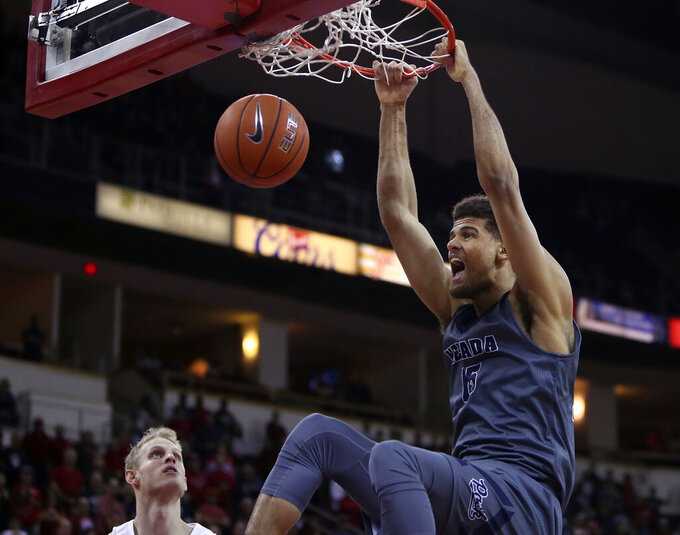 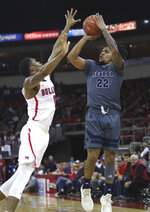 FRESNO, Calif. (AP) — Back at center for the first time since the Sweet 16 a year ago, Nevada's Jordan Caroline had a fairly easy time putting up his 10th double-double of the season while matching his career high for rebounds.

Caroline's come-from-behind steal and block in the second half were even bigger for the 10th-ranked Wolf Pack.

Caroline had 19 points and matched his career high with 16 rebounds, Caleb Martin scored 27 points, including two free throws with 54.6 seconds remaining, and Nevada held on to beat Fresno State 74-64 on Saturday night.

"Our effort was phenomenal from a defensive standpoint," Wolf Pack coach Eric Musselman said. "Jordan gives us so much. We're tinkering with some stuff and we played smaller because they're a smaller team. We felt like we wanted to out-quick them at positions so we downsized."

Martin keyed Nevada's up-tempo offense with a hand from Caroline, but it was the big man's defense that was most important.

Caroline steal led to 3-pointer by Jazz Johnson after Fresno State had closed within 58-52. He later blocked a shot to stop another Bulldogs' run and added a pair of put-back dunks.

"Those are both momentum plays," Caroline said. "Those mean more than anything. It's something generates a lot of energy and can swing the tide either way."

Caroline moved past Malik Story into 10th place on Nevada's career scoring list with 1,493 points to go with 1,012 career rebounds.

"We earned ourselves extra possessions and the 14 extra shots that we got I thought was the difference in the game," Musselman said. "It's a hard environment to win."

"They're big and they're tough and they go," Bulldogs coach Justin Hutson said. "We could have been better. We needed to be a little more physical tonight."

Nevada overcame a rocky start and led the entire second half, getting a big night from Martin. He scored 15 points in the second half, including seven straight during one stretch.

Fresno State lost for the second time in 12 games despite a big night by Huggins. The Bulldogs have lost 21 straight against Top 25 teams.

The teams came out shooting wildly beyond the arc before settling down.

Caroline, who missed his first three shots, got Fresno State going when he scored seven points in an 11-2 run.

After DeShon Taylor made back-to-back 3-pointers and a free throw that put the Bulldogs up by one, Caleb Martin made two free throws and a deep 3-pointer to help Nevada take a 37-32 halftime lead.

Nevada: The Wolf Pack struggled beyond the arc in the first half, and then turned things around by repeatedly driving the lane in the second half. They also got a big lift defensively, which keyed the offense to easy buckets. Caroline's work on the boards and defensively were huge, but Martin made shot-after-shot when Nevada needed it.

Fresno State: The Bulldogs have nothing to feel bad about. They played Nevada tight and were within six points with 2 ½ minutes left. They didn't close and saw their three-game conference winning streak end, but this is a team that should make some noise in the MWC the rest of the way.

Nevada shot 10 of 37 on threes. It's the fifth time this season that the Wolf Pack have attempted at least 30 shots from beyond the arc.

"When you play all those guards (like Fresno State) you're not going to get much post-up," Musselman said. "We wanted to keep the floor spaced. I'm not sure I wanted to shoot 27 percent from three."

THE EASY ONES HURT

Fresno State: The Bulldogs get six days off before traveling to play at Boise State on Jan. 19.