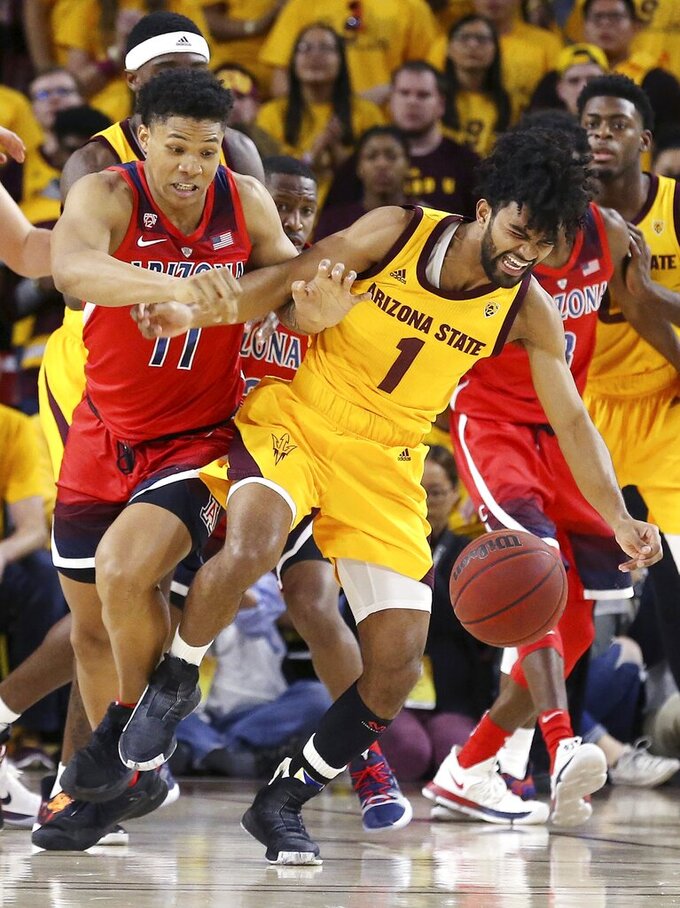 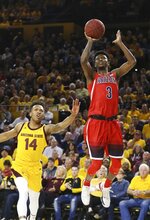 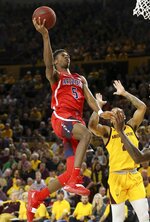 TEMPE, Ariz. (AP) — Before the shootaround on Thursday, Arizona State's Bobby Hurley gathered his team around him in street clothes and had them read aloud the scores of the previous games against arch-rival Arizona in his time as coach.

For each loss, and they were all losses, Hurley would run a "gasser" from line to line, one each for each point of the losing margin. Some of them were pretty one-sided.

"That was pretty much his message to us," Arizona State's Zyland Cheatham said. "He's a nut. The suffering's over. He said, 'The suffering stops tonight' and it did."

Remy Martin scored a career-high 31 points, eight in overtime, and Arizona State ended a six-game losing streak against arch-rival Arizona with a 95-88 victory over the Wildcats.

Martin also had eight assists and just one turnover.

"Whatever the team needs at that moment," Martin said, "that's what I'm going to do."

Arizona coach Sean Miller said his team's offense was as good as it's been in a while, but that defense, not so much.

"Our offense, we haven't had an offensive night like that, scoring the ball and being efficient in a long time and that should've been good enough for us to leave with a road win," he said, "but our defense was just inept."

For Cheatham, who grew up in the Phoenix area, the win had special meaning.

"For me personally, growing up here and just seeing — pretty much there's no really other way to say it — the dominance that UA has had over our program, for me to come back home and my first ever Territorial game and come out victorious, it means a lot to me."

Hurley said he hadn't time to ponder the significance of beating Arizona, which is having a down season after years of national prominence.

"Our fan base is excited, our players are very excited, our students were unbelievable," he said. "The crowd was ridiculously great and they enjoyed themselves and everyone left happy so it's a great night for everyone."

Rob Edwards added 19 points for the Sun Devils (15-6, 6-3 Pac-12) in Hurley's first win over Miller's Wildcats since becoming the Arizona State coach four seasons ago. Cheatham had 11 points and a career-high 22 rebounds, two games after grabbing 20 boards at UCLA.

Ryan Luther and Justin Coleman scored 19 apiece and Kyle Randolph 17 for the Wildcats (14-8, 5-4), who have lost three straight. Arizona was without guard Brandon Williams with an ankle injury.

Arizona State scored the first seven points of the overtime, Martin's 3-pointer putting the Sun Devils ahead 90-83 with 3:08 to play. Arizona never got closer than four again.

Arizona State led most of the first half and through the early stages of the second but never by much.

White's dunk capped a 6-0 spurt that put Arizona State up 34-27 with 44 seconds left in the half. Coleman and Luther each sank a 3 in the waning second of the half to cut the Sun Devils' lead to 36-33 at the break.

Arizona took its first lead since the opening minutes on Randolph's running bank shot that gave Arizona a 61-59 lead 8:13 remaining and Luther's second 3 of the half put Arizona ahead 67-61. Martin brought the Sun Devils back, sinking consecutive 3s and scoring on a reverse layup in traffic to put Arizona State ahead 73-72 and Cheatham's dunk had Arizona State up 75-72 with 3:20 left.

The teams traded baskets from there before Coleman's 3 tied it at 83-83 with 24 seconds left and the game headed to overtime.

The Sun Devils desperately needed this one to stay relevant in the Pac-12 with Washington coming to town next week. And Arizona State did most of the damage from the guard spot. Martin and Edwards were a combined 12-for-23 from the field, 8-for-13 on 3s.

Arizona welcomed the return of Chase Jeter, who missed the two losses in Los Angeles with a sore back, but couldn't come up with the big plays it needed in the overtime in the loud, packed Wells Fargo Arena. Unlike previous years, the crowd was not dominated by Arizona fans.

Arizona State: Sun Devils look for their fifth victory in six games when they host Washington on Thursday night.