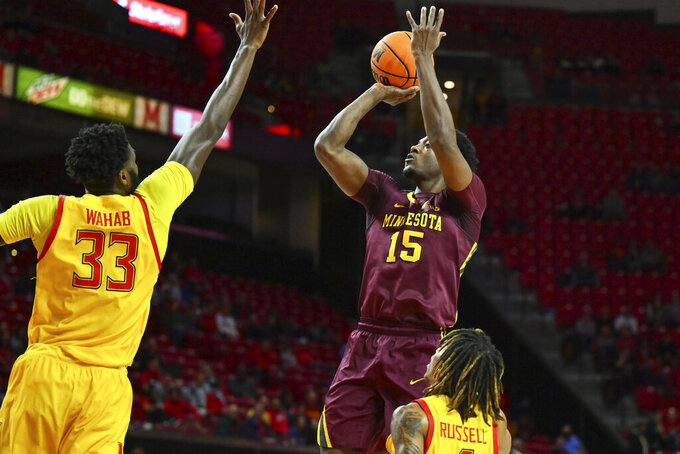 Maryland had a four-point lead at the break and stayed in front the entire second half.

A fast-break layup by Hart and a flagrant foul by Sean Sutherlin on the play resulted in a four-point possession for Maryland and when Reese added three more buckets in the 10-0 run the Terrapins suddenly had a 13-point advantage with 11 minutes remaining.

Battle scored Minnesota's first 14 points in the second half before Sutherlin hit a basket with 9:25 remaining, the first Gopher other than Battle to score since 4:15 of the first half. Sutherlin's bucket was part of a 20-9 run over the next seven minutes as the Gophers cut the deficit to two. But Ayala hit a 3-pointer and Hart added another in an 8-0 spurt to rebuild a 10-point edge with 1:25 remaining. Reese added six free throws from there.

Battle already had 20 points by halftime, but Maryland led 41-37. A 3-pointer by Xavier Green midway through the half gave the Terrapins the lead for good.

Maryland, which outscored Minnesota 46-16 in the paint, has won the last six meetings.

Minnesota ends the regular season at Northwestern, while Maryland finishes at home against Michigan State, both on Sunday.