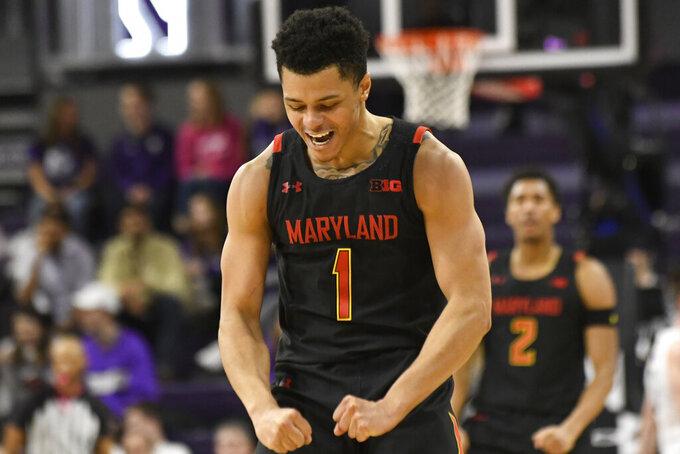 COLLEGE PARK, Md. (AP) — By the time Anthony Cowan Jr. is done playing basketball at Maryland, the slick-shooting guard will rank high among the school career leaders in several notable categories, including scoring and assists.

What he'd really like to be remembered for, however, is helping the Terrapins make a run deep into the NCAA Tournament.

Cowan scored a career-high 31 points against Iowa last Thursday to propel Maryland to its fourth straight victory. The streak has lifted the Terps within a game of first place in the Big Ten and pushed Maryland (17-4, 7-3) up six notches to No. 9 in this week's poll headed into Tuesday night's matchup with Rutgers.

Cowan now stands in 12th place on the school points list with 1,716. He ranks fifth in assists, second in free throws made and is one of only two Terps, along with Greivis Vasquez, to have at least 1,600 points and 520 assists.

All of that has nothing to do with Cowan's motivation to make this a senior season to remember.

“I want to win. That’s been my main goal this whole time," Cowan declared in October. “They can say it’s all about the points and assists, but at the end of the day we haven’t won anything. So we have to get that.“

After the Terrapins were ousted in the second round of the NCAA Tournament last year, Cowan explored the possibility of entering the NBA draft. He ultimately decided to put off going pro in favor of playing a leadership role on a Maryland team that hopes to be part of the Final Four in Atlanta, where the Terps claimed their only basketball championship in 2002.

“The thing I love about him is it’s all about winning with Anthony this year," coach Mark Turgeon said. “He's just become this terrific, understanding basketball player. And what's amazing about what he's doing is that he's helping me coach the team when we're not boxing out or not communicating,"

The 6-foot Cowan did it all against Iowa. He drove to the basket, went 10 for 11 at the foul line, nailed three 3-pointers and had six assists along with a half-dozen rebounds.

On Monday, Cowan was named Big Ten Player of the Week for the second time this season.

“Well, he’s virtually impossible to keep in front of you. You need to collectively defend him," Iowa coach Fran McCaffery said. “You have a shot if he’s missing jumpers. But the difficult thing about him is he finds people, too. He's creative that way. He plays like a veteran guy who’s been doing it and knows how to win.”

Cowan was one of 20 players on the Bob Cousy Award watch list, and he hasn't done anything to tarnish his chances of taking home the award given to the best point guard in the country.

“Let’s be realistic. He’s not going to have 31 every night. He’s human," Turgeon said. “But I think he'll be in the Bob Cousy deal and end up in the final five and have a chance to win that sucker."

That's not the kind of winning that interests Cowan as he heads toward the end of a sensational college career.

“It’s hard to even sleep for a few days if I’m not helping my team win," he said. “I was coming back just to do that."