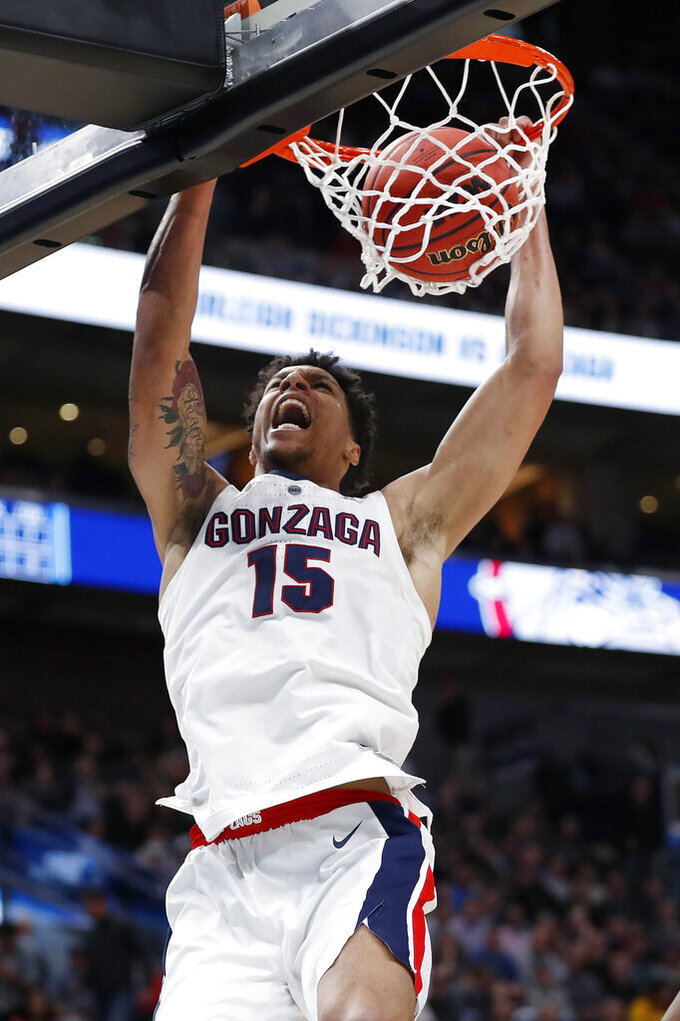 Now a 6-foot-8 shot-blocking force for top-seeded Gonzaga, Clarke went through a growth spurt over a four-year period that had his parents blowing through money for new duds and kicks.

"I always had to get lots of new clothes and shoes because my feet were always getting bigger," Clarke said Friday. "I certainly didn't mind that."

The Zags are thankful, too.

Gonzaga has an All-American candidate in Rui Hachimura and a roster full of flashier players, but Clarke could be the biggest difference maker when the top-seeded Zags face No. 9 Baylor in the second round of the West Region on Saturday.

Blessed with an uncanny knack of knowing where a shooter is headed, he serves as the eraser on the last line of Gonzaga's defense.

Clarke was second nationally with 105 blocked shots this season, leaving him nine behind the West Coast Conference record. He has three more blocked shots than missed shots and his 52 blocks in WCC play are second all-time.

Clarke's ability makes him a perfect fit for the switching style of defense Gonzaga likes to play. His rim-protecting proficiency allows the Zags to be more aggressive at the top of their defense.

Knowing Clarke is back there to swoop and swat away any mistakes lets his teammates take more chances without having to worry about the consequences.

"You can be aggressive and if you are in foul trouble, you know No. 15 will have your back," Gonzaga point guard Josh Perkins said. "It's always a pleasure to play with somebody like that."

Clarke's offensive game has blossomed since his days at San Jose State.

He was primarily a back-to-the basket player for the Spartans and did well there, averaging 17.3 points, 8.7 rebounds and 2.5 blocks as a sophomore.

Clarke wanted a bigger challenge after head coach Dave Wojcik resigned in 2017, so he decided to transfer.

One priority was to find a winning program after San Jose State struggled during his two seasons there. The other was a program with a strong redshirt program so he could improve his game.

Clarke spent his redshirt season going against the Zags' veteran players in practice while adding weight and strength.

He also overhauled his jump shot.

Through high school and at San Jose State, Clarke shot the ball from the side of his head instead of in front, like most shooters. Clarke spent his off year changing the slot of his shot and the results have shown.

The junior led the nation in shooting at 69.2 percent and is on pace to break the WCC record of 66.9 percent shot by former Gonzaga player Domantas Sabonis. Clarke hit 71 percent of his shots from inside the arc and was 4 for 14 from 3.

"I really worked on it a lot during the season and this past summer," Clarke said. "Obviously, it's been much better."

Clarke's rise started with his growth spurt in high school.

As a freshman in high school, he was a gangly 5-10 guard who couldn't dunk.

Once he started growing, it didn't seem like he would ever stop.

Clarke didn't dunk for the first time until he was 16 after hitting 6-2. He kept going, gaining nine inches in about a four-year span. His feet grew with him, climbing about a size and a half from 11 to his current size 16.

"It was definitely weird," Clarke said. "During those summer times, I was always super, super tired and I never knew why, really. I never thought I would grow to 6-8."