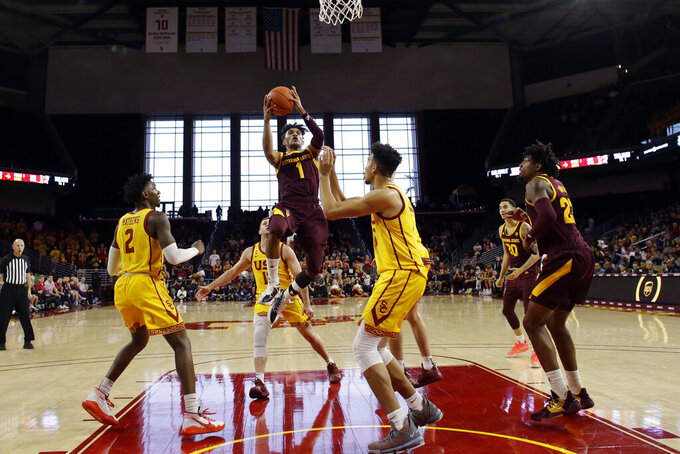 LOS ANGELES (AP) — Jonah Mathews delivered when it mattered most for Southern California.

After Arizona State trimmed its deficit to 54-53 midway through the second half, Mathews scored eight straight USC points to push the lead back to seven.

Mathews finished with 23 points and Daniel Utomi added 19 and 10 rebounds to lead USC to a 71-61 win over Arizona State on Saturday.

The Trojans (21-9, 10-7) swept the Arizona schools at home this weekend and have won four of their last six games.

“We knew they would come back with a punch. At that point, I just wanted to solidify the win,” Mathews said. “I just made plays and my teammates found me. I just happened to make plays as a senior. Coach (Andy Enfield) put the ball in my hands, and I had to produce.”

USC went on a 11-3 run early in the second half to build a 12-point lead at 54-42 with 12:57 left. During that run, Onyeka Okongwu had a three-point play and reserve Quinton Adlesh had a steal that led to him making an open 3-pointer on the other end. The Sun Devils answered with an 11-0 run to pull within three points with 9:04 left. Taeshon Cherry capped the spurt with a 3 and, after a timeout, he stole the ball and Remy Martin made a layup to make 54-53 with 8:49 left.

That’s when Mathews did his thing.

Matthews stopped the run with a three-point play and USC hung on from there. The Sun Devils never led in the second half.

Mathews was still recovering from a nasty stomach virus during Thursday’s game against the Wildcats. It was the worst sickness he said he’d ever experienced.

“For him to get through that and bounce back so quickly,” Enfield said. “I was shocked he was so good against Arizona. I expected him to play well (against Arizona State) because he had two days to recover. He’s just been playing super basketball.”

Arizona State missed eight of its first nine shots and Utomi made a 3-pointer from the left wing with 11:24 left in the first half to give Southern Cal a 24-11 lead. The Sun Devils trailed USC 41-36 at halftime despite 14 first-turnovers by the Trojans.

“I’m proud of how we competed in both games,” Arizona State coach Bobby Hurley said. “The first half we didn’t defend them great in terms of their percentages shooting the ball. They’re a very good team. Jonah Mathews is having a great career, a senior. He played a very good game as he did the first time we played ... I thought we were chasing. We couldn’t make enough shots in a key stage.”

USC has designs on making the NCAA Tournament. Asked if he thinks the Trojans have done enough to get in, Mathews said: “No. We still have work to do. We have UCLA next week and then we go to the Pac-12 Tournament and we’ll try to win. It’s definitely not close to over yet.”

Enfield already was lobbying to get more support for the Trojans at the Galen Center. There was a good atmosphere Saturday even though the announced attendance was just 4,786. He said he knows the rivalry game against UCLA will sell out, but he’s looking beyond that.

“I don’t know what else we can do when you put four guys in the NBA the last two years and you’ve got a lottery pick on your team now and you’ve won 20 games the last four of five years and you’re competing for the NCAA Tournament and Pac-12 Championships,” Enfield said. “...There’s no reason we shouldn’t have at least 7-800 students every game. UCLA I’m sure will have 2,000 of them.”

ARIZONA STATE: The Sun Devils are trying to put the two losses on the Los Angeles road trip behind them and play well over the final homestand.

USC: The Trojans are surging and trying to leapfrog teams in the middle of the pack to get a better seed for the Pac-12 Tournament.

USC: Hosts UCLA and will try to complete the season sweep of the Bruins in its final Pac-12 game on March 7.