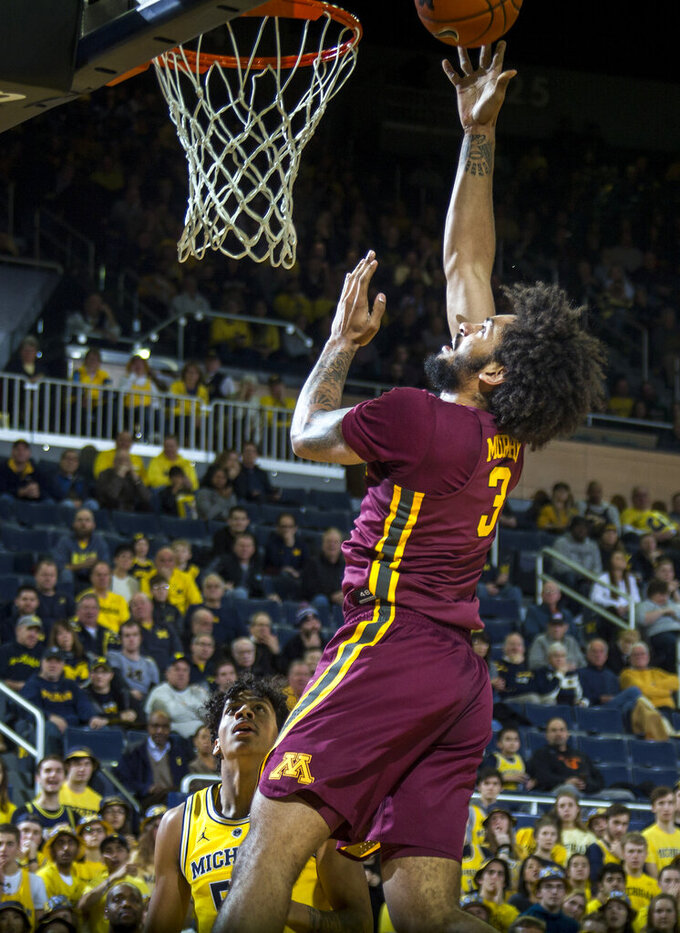 ANN ARBOR, Mich. (AP) — Charles Matthews made a baseline floater at the buzzer to lift No. 5 Michigan to a 59-57 win over Minnesota on Tuesday night after the Golden Gophers scored 10 straight points to tie the game late.

On the final possession, Iggy Brazdeikis drove to the basket and had his shot blocked by Eric Curry, but the ball bounced right to Matthews to the left of the rim and he had time to release a shot that went high in the air and dropped through with no time remaining.

Brazdeikis scored 13 of his 18 points in the second half. He was held scoreless at Wisconsin on Saturday when the Wolverines lost for the first time this season. Michigan (18-1, 7-1 Big Ten) struggled through much of the game against Minnesota and was down by seven before Brazdeikis made a 3-pointer and a three-point play to cut the deficit to one. That was the start of a 23-3 run by the Wolverines.

Michigan pushed the lead to 13, and then it was Minnesota's turn to rally. Gabe Kalscheur's 3-pointer tied it at 57 with 30.9 seconds remaining.

Minnesota: The way Michigan shot the ball in the first half, the Golden Gophers could have been up by more at halftime, but turnovers hurt. Minnesota had 10 in the first half while the Wolverines committed just two. The margin was 16-6 at the end of the game.

Michigan: This obviously wasn't an emphatic victory for the Wolverines after their weekend loss. A lot of their problems were because of outside shooting. They went 3 of 22 from 3-point range.

An underwhelming win at home is unlikely to move the needle much for Michigan.

Michigan: The Wolverines have a relatively quick turnaround before playing at Indiana on Friday night.