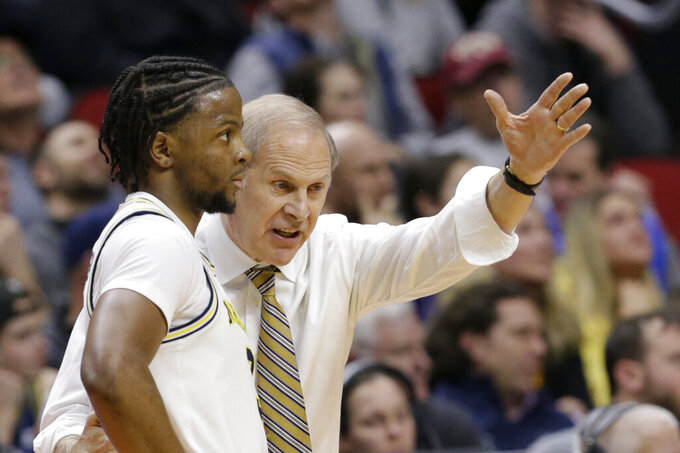 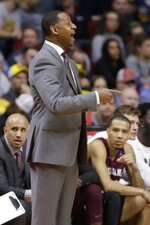 DES MOINES, Iowa (AP) — Charles Matthews had 22 points and 10 rebounds in his best performance since coming back from injury, and No. 2 seed Michigan put away Montana early in a 74-55 victory in the first round of the NCAA Tournament on Thursday night.

Ignas Brazdeikis added 14 points and seven rebounds, and Jon Teske had 11 points and nine boards for the Wolverines, who led by as many as 27 points in the second half.

The Wolverines (29-6) are in the round of 32 for the third straight year. They'll play Florida on Saturday.

Montana missed 13 of its first 16 shots and trailed by 13 points 10 minutes into the game. The start was in stark contrast to last year when these teams met in the first round. The Grizzlies scored the game's first 10 points before giving way and losing 61-47.

Matthews was 8 of 12 from the floor while posting his third double-double of the season. He had been a combined 6 of 21 for a total of 15 points in the three games since he came back from a right ankle injury that sidelined him three games.

Zavier Simpson had 10 assists and seven rebounds for Michigan.

The Big Ten-Big Sky matchup turned into the rout that would be expected when a 2 seed meets a 15. Michigan's physical dominance was never as evident as on a couple plays involving Brazdeikis. The Big Ten newcomer of the year threw down a huge dunk off Jordan Poole's lob, and he later swiped the ball away from Donaven Dorsey at halfcourt and took it in for another rim-rattling jam.

Montana: The Grizzlies were missing 6-foot-8, 253-pound redshirt senior forward Jamar Akoh once again because of a knee injury. Not that it would have made much difference, but they could have used him against the 7-1, 260-pound Teske and Michigan's other bigs. As it is, they won 15 of their last 18 games and played in the tournament for the second straight year and fifth time in 10 years.

Michigan: The Wolverines put their disappointing loss to Michigan State in the Big Ten Tournament title game in their rearview mirror with an easy win over the Grizzlies. Now it's on to what figures to be a challenging game against a defensive-oriented No. 10 seed in Florida. The Wolverines beat the Gators in the Elite Eight on their way to the 2013 national championship game.

Montana: Coach Travis DeCuire loses a lot of scoring punch from a team that won 52 games the last two seasons, the best stretch in program history.

Michigan: Plays Florida in the second round Saturday.