McBride, No. 11 West Virginia rally past No. 10 Texas Tech 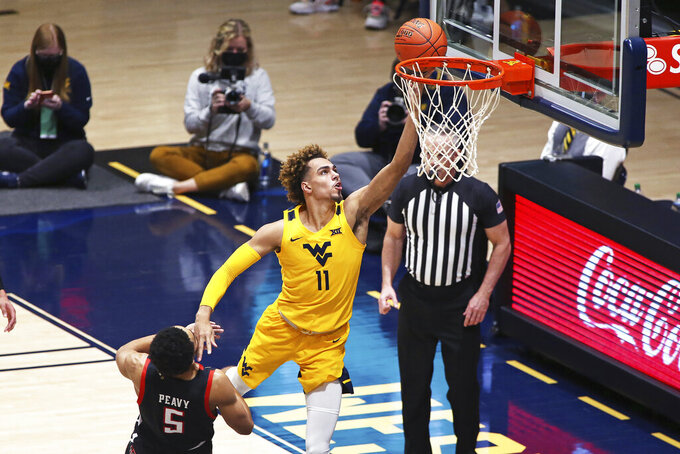 MORGANTOWN, W.Va. (AP) — Miles McBride made a go-ahead jumper with 6 seconds left and finished with a season-high 24 points, helping No. 11 West Virginia rally for a wild 88-87 victory over No. 10 Texas Tech on Monday night.

Jalen Bridges and reserve Sean McNeil each scored 13 points for West Virginia (11-4, 4-3 Big 12), which trailed by 12 with about seven minutes left. Derek Culver had 10 points and nine rebounds.

Taz Sherman made a layup with 50 seconds to go and the Mountaineers got the ball back for one last chance. McBride drove the lane and made an off-balance shot over two defenders.

Texas Tech: The Red Raiders hadn't played since an eight-point home loss to Baylor on Jan. 16. Games last week against TCU and Iowa State were postponed due to COVID-19 issues with those opponents.

West Virginia: West Virginia played its first home game in more than two weeks after its two previous home games were postponed due to COVID-19 issues with the Mountaineers. After forcing 28 turnovers last game against Kansas State, West Virginia only forced two against the Red Raiders.

Texas Tech plays at LSU in the Big 12-SEC Challenge on Saturday. The two conferences split 10 games a year ago. The SEC has won just one of the previous seven challenges with two ties.